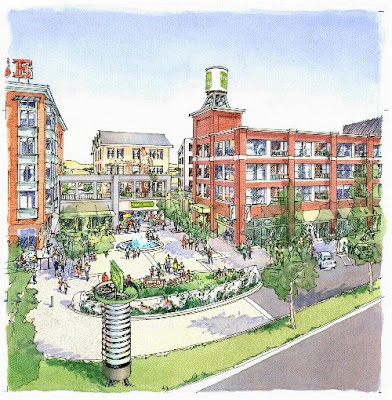 The artist's rendering above is of the Market Town portion of the New Town Center planned development in Hercules, California. If you look closely you can see the Fresh & Easy logo on the building in the back, far right, in the foreground of the multi-story yellow building framing the Fresh & Easy retail space. Look at the water tower in the drawing. You can see the Fresh & Easy logo adorning it as well. If you double click on the drawing you can enlarge it and view it better. [Source: Artist's rendering from Collier International Commercial Real Estate Consultants, City of Hercules Web site.]

Tesco's Fresh & Easy Neighborhood Market is planning to locate one of its Fresh & Easy small-format, combination grocery and fresh foods markets in a major planned new mixed-use development called Market Town at New Town Center, which is near the waterfront in the Northern California East Bay Area city of Hercules, which is located in Contra Costa County.

The Fresh & Easy store will be the food and grocery retail anchor of the Market Town project, which is the first phase of the larger, more comprehensive "new town-style" New Town Center development.

Market Town is a mixed-use project centered around an attractively designed and landscaped town square, surrounding by the Fresh & Easy store space and other retail spaces, commercial office buildings, and residential units. The design is inspired by what's often referred to by urban designers as "new urbanism."

According to our commercial real estate sources, the City of Hercules and a marketing brochure being distributed by the Colliers International Commercial Real Estate Consultants firm, which is marketing the New Town Center development and working with Tesco's Fresh & Easy Neighborhood Market on its store space, the Fresh & Easy market will have a prime retail storefront, right next to a yet to be named non-grocery retailer, right off of the town square, which is the centerpiece of the pedestrian-friendly plaza or courtyard that is the centerpiece of the first phase Market Town at New Town Center design.

[You can view and download the complete New Town Center development design plans from the city of Hercules Web site here.]

Hercules isn't one of the 18 planned San Francisco Bay Area Fresh & Easy store locations Tesco has announced or confirmed to date. It's also not one of the numerous planned Bay Area store sites Fresh & Easy Buzz has uncovered and reported on to date.

Therefore, the Hercules, California planned Fresh & Easy store in the Market Town at New Town Center development is another new unit Tesco has on tap for Northern California's San Francisco Bay Area, even though the retailer has postponed its launch into the region. [See our recent April 13, 2008 story here: Despite Postponing its Northern California Launch Again Earlier This Year Tesco's Fresh & Easy Planning Third San Francisco Store; First Stockton Unit. Note the links at the bottom of the story as well.]

The Market Town at New Town Center planned development sits on a site near the city's waterfront that currently serves as a Park-N-Ride lot for various forms of public transportation services, including BART (Bay Area Rapid Transit), the electric train system that links most parts of the nine-county Bay Area with San Francisco. People park their cars at the site and then commute to work or elsewhere using BART and other forms public transportation.

Locating grocery stores in such "new town-design" developments isn't anything new for United Kingdom-based Tesco, which owns and operates El Segundo, (Southern) California-based Fresh & Easy Neighborhood Market. The retailer, which is the third-largest in the world after number one Wal-Mart Stores, Inc. and number two Carrefour, which is headquartered in France, has built and opened Tesco stores in the United Kingdom in numerous such developments.

The fact that construction hasn't yet started on the development and isn't expected to for quite some time, perhaps not until 2010, according to a commercial real estate source, is actually a good thing for Fresh & Easy in Northern California at this point in time, since it has postponed its launch into the region, doesn't have a Northern California distribution center yet completed, and has a number of store sites in the Bay Area that it has now leased for well over a year, but has not yet remodeled or built.

We first reported that Tesco had acquired the San Jose and Napa sites for Fresh & Easy stores in January, 2008, 15 months ago. The Bird Avenue location in San Jose has had only minimal work done on it to date, mostly a new roof and a couple other things. Work on the vacant building in Napa has yet to begin, as of March, when we last received a report on the status of the site from one of our correspondents in the California wine country city.

It's our analysis that locating a Fresh & Easy market in the Market Town at New Town Center development could be a winner for Tesco's Fresh & Easy Neighborhood Market. It's good niche store location strategy, going where a grocery store is needed in a new development rather than doing what it has done a bit too often in the past, which is to grab up a vacant supermarket or former drug store building in some cases just because it is there. Perhaps the store location learning curve is tightening at Fresh & Easy after having a couple years experience in California, Nevada and Arizona under its belt?

And If the planned mixed-use development eventually fills up with commercial and office workers, which is likely to be the case, that could be a very good captive audience for Tesco Fresh & Easy's fresh, prepared foods offerings.

Additionally, if a significant number of people move into residential buildings in the development that would offer Fresh & Easy, as the only grocery market in the center, an additional captive audience of food and grocery shoppers, particularly if the development retains its focus on pedestrian street life, as is depicted in the project designs and in the Colliers International marketing brochure, as well as in the development plans for the center.

Hercules and the surrounding Contra Costa County cities of Pinole and Crockett are part of a fairly fast-growing region of the East Bay Area where housing has been historically (and still is largely) less expensive (still higher than most regions of the U.S.) than it is in most regions of the Bay Area. It's also an area that has some of the last remaining industrial and semi-industrial types of businesses in the San Francisco Bay Area, which is home to about seven million residents.

Of course, the larger question is: When will Tesco's Fresh & Easy open its first store in the San Francisco Bay Area -- and in the nearby Northern San Joaquin Valley and the Sacramento-Vacaville region? We might have an answer or two to that question soon. Stay tuned.

>April 14, 2008: New Multi-Supercenter and Multi-Format Strategies Are Showing Wal-Mart to Be A More Agile Grocery Retailer in the U.S.