Got Milk? Getting it For Shoppers is Much Less Expensive Now Than it Was A Year Ago in California, Nevada and Arizona; Tomorrow it's Even Free 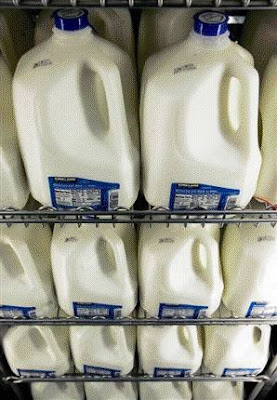 Fresh, whole milk (the kind that comes from cows) is currently selling on average for 40% -to- 50% less for a gallon than it was a year ago in California, Nevada and Arizona, the three states where Tesco has its current 116 Fresh & Easy Neighborhood Market grocery and fresh foods stores.

Today it's easy to find a gallon of milk priced everyday at $1.99 in supermarkets in the three states. Not so a year ago.

Some supermarkets, like Kroger Co.-owned Fry's in Arizona, are even offering gallons and half- gallons of fresh milk at loss-leader promotional prices in their weekly advertising circulars. For example, this week Fry's is advertising gallons of whole milk for $1.47, and half gallons for 88-cents each, in its Arizona supermarkets. Fry's is the number two food and grocery sales market share leader in Arizona, just a couple points behind number one Wal-Mart.

In California, the California Milk Advisory Board (CMAB), which promotes the state's about 2,000 dairy farmers and the fresh milk and value-added dairy products they produce, distributed full-color, full-page free-standing inserts (FSI's) in March and again this month, advertising and promoting California-produced milk and dairy products.

This month's CMAB full-page FSI also features a coupon good for 50 cents off gallons and half- gallons of fresh milk, along with a coupon good for 50-cents off any one pound package of butter, as long as it is made in California and has the association's "Real California" seal on the package, showing the product is made from milk from California's dairy farmers.

The California Milk Advisory Board (CMAB) has also made the coupons available on its Web site. The trade group pays retailers the face value of the coupon plus a three -to- five cent per coupon handling charge for redeeming the milk coupons in the stores.

Tesco's Fresh & Easy Neighborhood Market doesn't except manufacturers' coupons like the milk board is distributing. Therefore shoppers can't take advantage of and use the 50-cents off fresh milk and other California-produced dairy products' coupons in the Fresh & Easy stores.

And Tesco's Fresh & Easy can't gain the added sales the 50-cent coupons are bringing to food and grocery retailers in California. The milk board included the FSI's in the Sunday editions of every major daily newspaper in California in March and this month. That's millions of the coupons distributed.

About half of Tesco's 116 Fresh & Easy grocery and fresh foods markets are located in Southern Californa (and three in Bakersfield.) The other half are roughly equally divided between southern Nevada and Metropolitan Phoenix, Arizona.

California is the number one producer and processor of fresh milk and most value-added dairy products in the nation.

Free Milk from Shamrock Farms at Bashas in Arizona tomorrow

Arizona's Shamrock Farms, which is the largest family-owned branded dairy company in the southwestern United States, is taking fresh milk promoting to a new level tomorrow, Saturday, April 11. The local Arizona-based dairy company is teaming up with local supermarket chain Bashas' in a mega-free Shamrock Farms brand milk giveaway at four Bashas' supermarkets in the state.

Shamrock Farms will give away 10,000 half-gallons (5,000 gallons) of its new Shamrock Farms Essentials and Essentials for Kids fresh milk at the four Bashas' stores tomorrow. The dairy company also will be handing out coupons good for 65-cents off future purchases of the half gallon containers of the milk; the same coupons current available on the company's Web site. The value-added, nutrient-rich Essentials line comes only in half gallons.

The dairy company will distribute 2,500 free half-gallons of the milk at each of the four stores; one gallon per person or family.

The milk freebie event starts at the stores at noon according to Shamrock Farms. It ends when all of the 2,500 half gallons of free milk have been distributed; but no later than 5pm. We doubt if the Shamrock Farms' folks will need to stay at the stores anywhere close to 5pm. We suspect the milk will be gone in an hour or two at each store. "Free" is a magic marketing word.

Shamrock Farms, which is a division of the Shamrock Foods Company, says those consumers who don't get a free half-gallon of its new Essentials nutrient-fortified fresh milk at one of the four Bashas' supermarkets tomorrow will get a second chance for a freebie.

The company says it will again be handing out free half-gallons of the milk on March 18 at the Metro Phoenix March for Babies event. That event is at Phoenix's Wesley Bolin Plaza, 1900 W. Washington Ave., in front of the state Capitol building. It starts at 7am on March 18.

Founded in 1922, Shamrock Farms is the largest family-owned and operated dairy in the Southwest U.S. The company produces and distributes a full line of dairy products, including fresh milk, sour cream, cottage cheese, whipping cream, ice cream, and more. The dairy processor and marketer is well known in Arizona and throughout the southwest for its spokesbovine -- Roxie The Cow.

The reason for the dramatically lower retail prices and unusual promotions, like the generic 50-cent off coupons good for any brand of milk produced in California being distributed by the California Milk Advisory Board CMAB), is because the supply of milk in the state is up while the demand is down. OR the demand is down based on the level of supply. It goes both ways.

For example, California's dairy farmers are currently being paid about 60% less for their milk than they were a year ago. They're struggling.

In fact it has gotten so tough on dairy farmers in California's San Joaquin Valley, which is the highest per-capita milk producing region in the U.S., that the Modesto, California-based Western United Dairyman, a state dairy farmer trade association, is working with the region's dairy farmers on a cow kill program. Under the program dairy farmers are killing off many of their cows, selling them to meat processing companies.

The hope of the cow herd-reduction program is that by reducing the number of milk-producing cows, the supply of milk will thereby be reduced, leading to the dairy farmers receiving a higher price for their milk from the milk processing companies because supply and demand will then be in a more equal balance.

Milk production is down by 5.8% in California, compared to the same time last year, according to the Western United Dairymen. The nearly 6% reduction in milk supply hasn't helped increase the milk price paid to the state's dairy farmers though, which is why the group wants to reduce the supply further through the herd reduction program.

Additionally, the California Milk Advisory Board is distributing the fresh milk and dairy products coupons for two primary reasons.

First, the trade group is trying to increase sales, and thus demand, for fresh milk produced by California's dairy farmers.

Second, the trade group says about 20% of all fresh fluid milk sold in California comes from out of state dairy farmers with about 80% coming from California dairy farms.

The milk board hopes to reduced that 20% (out of state produced milk) by whatever percentage it can. Even taking a 5% bite out of the 20% of out of state milk sold in California would translate into a substantial boost to California's milk producing dairies, the trade group says.

Milk prices: Plus for consumers, retailers; minus for dairy farmers

Meanwhile though, consumers in California, Nevada and Arizona -- and throughout the U.S. -- are saving big bucks on fresh milk right now, compared to what they were paying a year ago.

And if you include the supermarket promotions, like Fry's in Arizona, the cents off coupons, not to mention the free giveaways like tomorrow's Shamrock Farms event at the four Bashas' stores, the savings on fresh fluid milk is even greater.

That's one grocery shopping (and pocketbook) silver lining for consumers, as well as for food and grocery retailers since they are making basically the same profit margins as a year ago, in this current recession.

But like is always the case, it comes at a price for another group. In this case that group is dairy farmers, not just in California but throughout the U.S. They are receiving the lowest payments for the milk they sell to milk processors in recent memory.

But, at least tomorrow at the four Bashas' supermarkets, there won't be any crying over free milk. But we bet there will be lots of competition among consumers to be one of the first 2,500 hundred people in line at each of the four stores to get their free half-gallon of milk.
Posted by Fresh & Easy Buzz at 7:37 PM