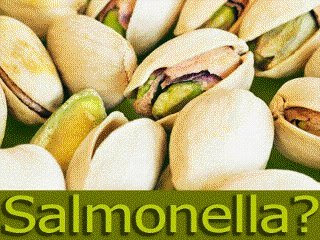 It appears we were correct in our assessment yesterday.

Today the U.S. Food & Drug Administration (FDA) and the nut processing company are saying they have expanded the recall of pistachio nuts processed by Setton Pistachio of Terra Bella, the second largest pistachio nut processor in the U.S., because of increased and continued concerns over salmonella contamination in the nuts.

As a result, retailers, distributors and consumers are in for additional product recalls because of the expanded scope (all of 2008) of the pistachio recall.

The non-profit consumer watchdog group Science in the Public Interest said this morning it expects the expanded pistachio recall to be similar in scale to the recent, and still not over, peanut product recall over the salmonella issue.

"This is going to resemble the peanut recall in that products are going to be added every day as companies discover they used Setton pistachios," Caroline Smith DeWaal of the Center for Science in the Public Interest said today. "It's going to take a while for the dust to settle."

U.S. consumer concern over the pistachio nut recall is reflected in the graph above captured today from Google Trends. (View the top line titled "search volume index"). Note the spike of Google searches using the search term "pistachio nuts." We expect another huge spike as the news gets out about the expanded recall of the nuts processed at Setton Pistachio. The bottom graph measures news reference volume for the search term "pistachio nuts."
In addition to being sold as snack nuts, pistachios are also used in various food products -- pistachio-flavored ice cream, puddings and the like. Unlike peanuts though, pistachios are much more of a niche crop and product in the U.S.

Products are still being recalled from retail stores that contain peanuts or peanut paste produced by the Peanut Corp. of America, the processor identified by the FDA as the source of the salmonella outbreak this year that sickened about 700 people.

The good news at present is that their have been no reported illnesses from pistachio nuts processed at Setton Pistachio or elsewhere.

The salmonella was first discovered in pistachios processed by Setton Pistachio by a food company that spot tested the nuts after buying them from the pistachio processing company.

The FDA was then called in. During an inspection of the processing plant the FDA found that Setton Pistachio of Terra Bella was processing raw and roasted pistachios on the same production lines without adequate cleaning between uses, according to David Acheson, the FDA's associate commissioner for foods."

Such a practice has the potential for salmonella contamination.

FDA and state inspectors then found salmonella in the Setton Pistachio plant, including directly on the machines on the pistachio nut production line.

The FDA said this morning it is asking retailers not to sell and consumers not to eat any pistachio nuts or food products that contain the nuts unless the agency can confirm the pistachios don't come from Setton Farm of Terra Bella.

It's possible that the pistachio recall could spread outside of the U.S. because Setton Pistachio is an exporter of pistachios, along with being a domestic processors and seller of the nuts.

It would seem logical that since the FDA is now expanding the recall to all of the 2008 pistachios, except the whole, raw varieties, that nuts sold by Setton Pistachio to companies in these countries also would be recalled.

The expanded pistachio recall comes on the heels of what seems like back to back recalls over salmonella contamination over the last few years. There were tomatoes, peppers and leafy greens, in the fresh produce segment. And of course the massive peanut butter product recall over salmonella, which continues.

The FDA under President Barack Obama has vowed to improve its regulation of food safety in the U.S. However, were it not for the private company spot testing the pistachios it bought from Setton Pistachio, it's likely the FDA might not have discovered the salmonella contamination in the Setton Pistachio processing plant.

The Obama Administration and Congress have appropriated more money to the FDA to beef up its food safety enforcement activity.

In addition, food and grocery industry trade groups like FMI (Food Marketing Institute) and GMA (Grocery Manufacturers' of America) are calling for even more funding for the FDA, as well as encouraging the agency to enact more stringent food safety regulations on both domestic-produced and imported foods.

You know that when an industry asks the government to regulate it even more that there's a serious and real problem.

Perhaps the current pistachio nut recall, on the heels of the peanut product recall, will serve as the catalyst for a wholesale revamping at FDA, particularly when it comes to food safety.

There appears to be a bipartisan political, as well as food industry, consensus that more funding for the FDA is needed. The question is if the food safety problems are more extensive than increased funding and enforcement will be able to solve? Increased effort and time will tell.

Note: The non-profit consumer group Science in the Public Interest is urging the FDA to change its basic food safety policy. Read what the group is suggesting here: [Pistachio Recall Shows FDA Needs to Shift from Voluntary Guidance... ...]

Looks like the FDA is on the ball this time.

They really got ahead of the Pistachio problem.

This may be a sign of better Food Safety to come.