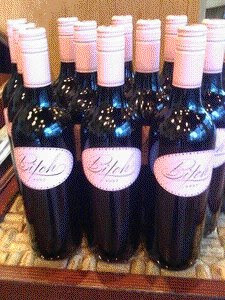 A photograph of a pink-labeled wine brand called "Bitch," taken recently at the Fresh & Easy Neighborhood Market store at 3131 East Greenway Road in Phoenix, Arizona, by Brighkite.com user Kissmecait. Kissmecait has a great eye for unique brands, as well as for photography.

The Fresh & Easy Neighborhood Market store at 3131 East Greenway Road in Phoenix, Arizona has set up a site (or one has been set up for the store by someone else) on the social networking site Brightkite.com.

Like Twitter, Brightkite.com can also be used as a social networking and media marketing tool by businesses, the media and other organizations, also something that Twitter.com is being used for, in order to publicize what they offer and to communicate with consumers, in Brightkite's case more from a photographic perspective rather than with words like is the case on the micro-blogging Twitter social networking site.

You can view the Fresh & Easy 3131 East Greenway Road, Phoenix, Arizona Brightkite.com site here, where kissmecait's three photos from the store are posted. That's cait's photograph of the pink-labeled "Bitch Wine" from the Fresh & Easy market at the top of this story, by the way. You can view it and the other two photographs at the link above as well.

Additionally, you can view kissmecait's Brightkite.com home site here, where in addition to the photographs from the Phoenix Fresh & Easy Neighborhood Market store she has others posted from her ventures out and about the Phoenix, Arizona Metro region.

We like kissmecait's photos and her captions. Very creative.

In a sense the place-centered store pictures and captions taken in the Phoenix Fresh & Easy market and posted on Brightkite.com serve as sort of a grocery store anthropology and geography in that they capture aspects of the place (the Fresh & Easy store), time (when the given photograph was taken and comment written) and the contents of the store (the products photographed and described). Perhaps thousands of years from now future civilizations and societies will study them as a way to try and understand food and grocery retailing in the 21rst century?

It also is interesting to Fresh & Easy Buzz in that the photographs and comments capture what in the store interests a specific consumer or shopper, in this instance kissmecait. She obviously loves to buy and drink the Press Coffee, for example. And her sense of fun and humor likely is what motivated her to capture the bottles of "Bitch" brand wine with her camera? And perhaps her sense of irony is what made her decide to photograph the red grapes in a purple container and caption the picture as she did?

We shall observe with keen interest additional photographs and captions on the Fresh & Easy 3131 East Greenway Road Brightkite site. In fact, we can't wait to see what kissmecait decides to explore and photograph on her next trip to the store. Great retail anthropology and geography kissmecait.