Tesco's Fresh & Easy Signs Lease For New Store in Pleasanton, CA; We Reported 15 Months Ago the SF Bay Area City Was in its Strategic Sites 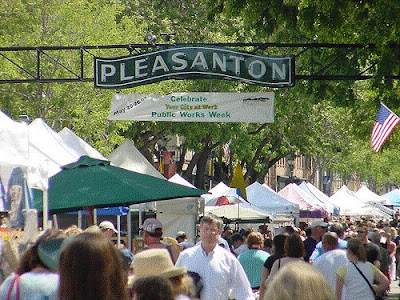 Pleasanton, California, in Northern California's San Francisco Bay Area, with its charming, tree-shaded downtown full of shops and restaurants pictured above, also is home to supermarket giant Safeway Stores' corporate headquarters, the 854-acre Hacienda Business Park, which houses offices of major companies like Bank of America and numerous others, and the Bernal Corporate Park, home to the Northern California Division of mega-food brokeage firm Acosta. Tesco plans to open one of its Fresh & Easy grocery and fresh foods markets in Pleasanton in the summer of 2010.

In this January 18, 2008 piece [Fresh & Easy Locking-Up Leases For Northern California Invasion] published in Fresh & Easy Buzz 15 months ago we identified the East Bay Area city of Pleasanton as one of the numerous cities in Northern California's San Francisco Bay Area where Tesco's Fresh & Easy Neighborhood Market was searching for locations for its Fresh & Easy small-format (10,000 -to- 13,000 square foot), convenience-oriented, combination grocery and fresh foods markets.

"Tesco is negotiating over numerous other sights throughout the Bay Area however. According to our commercial real estate and city and county government sources, the grocer is looking in the east Bay Area cities of Hayward, Walnut Creek, Antioch, Oakely, Pittsburg, Pleasanton, Dublin and Livermore, (in addition to Concord and Oakland), where it plans on having one or more stores per city."

Tesco's Fresh & Easy later announced (confirmed in our case) that it had signed leases for stores in all of the cities mentioned in the above paragraph in our January, 2008 report, accept for Pleasanton, Dublin and Livermore (not yet at least) as part of a listing of 18 Fresh & Easy store locations in the San Francisco Bay Area it planned to open. [You can view a list of those 18 stores in this April 13, 2009 piece: Despite Postponing its Northern California Launch Again Earlier This Year Tesco's Fresh & Easy Planning Third San Francisco Store; First Stockton Unit.]

Tesco's Fresh & Easy has now signed a lease for a 15,000 square-foot space in Pleasanton's Rose Pavilion Shopping Center on Santa Rita Road and Rosewood Drive in the city, according to an announcement last week by the shopping center's owner, Centro Properties.

The space currently houses a fitness center business called Express Fitness. That business plans on moving out of the building and into a 19,000 square-foot vacant building in the shopping center that formerly housed Consignment Plus, a retail consignment-oriented store, according to Carol Merriman, senior vice president for shopping center owner Centro Properties.

Tesco's Fresh & Easy will remodel the Express Fitness building once the business moves into its larger digs. The fitness center plans to open in its new home in November of this year, according to the shopping center's owner.

Centro Properties said Tesco's Fresh & Easy Neighborhood Market has plans to open the store in the shopping center in the summer of 2010.

The Fresh & Easy market has already gone through the City of Pleasanton's permits approval process.

Tesco's Fresh & Easy continues to look at sites in Dublin and Livermore, the two cities from our January 28, 2008 story that the retailer has yet to sign leases for store sites in, both of which are just a few miles from Pleasanton. The region is called the Tri-Counties area.

Interestingly, Centro Properties also announced at the same time it announced the Fresh & Easy lease, that a branch of the 99 Ranch Market Asian specialty supermarket chain would also be moving into the Rose Pavilion Shopping Center, joining Tesco's Fresh & Easy as a second food and grocery retailing tenant in the center.

99 Ranch Market, which is headquartered in Westminster in Southern California, is the largest Asian specialty supermarket chain in the U.S. And although the stores specialize in foods, groceries and related products targeted to Asian Americans, particularly Chinese Americans, the supermarkets also sell a decent selection of non-Asian, mainstream food, grocery and packaged goods items.

The stores are well known for their extensive selection of fresh produce, meats, and fish and seafood, offered at everyday low prices. The meat, fish-seafood and produce items appeal to consumers of all ethnic backgrounds.

The 99 Ranch Market supermarkets offer most all meat, fish-seafood and produce items Americans use. However, added to that mix are numerous specialty cuts of meats (and fish and seafood items) that Asian Americans like, along with lots of specialty produce geared to Asian cuisines -- Chinese, Japanese, Korean, Pacific Islander and others.

Although most of its customer base consists of Asian Americans, during the current recession 99 Ranch Market, which also offers various mainstream packaged grocery items, has been gaining more and more non-Asian shoppers because of its everyday low-price structure on numerous items, particularly when it comes to fresh meats, fish and seafood, other perishables and numerous basic commodity type items.

The supermarkets also sell Asian fresh, prepared foods, with a focus on Chinese foods, which is a cuisine eaten by most Americans regardless of ethnic background. The take-out is very popular in the stores that offer it.

99 Ranch Market has a number of its supermarkets located in the San Francisco Bay Area, which has one of the highest per-capita Asian American populations in the United States. This includes many first generation immigrants from numerous Asian nations -- Chinese, Pacific Islander and Vietnamese are the top Asian ethnic backgrounds in terms of population percentages in the Bay Area -- as well as numerous second and third-generation Asian Americans born in the U.S.

The 99 Ranch Market supermarkets in the Bay Area are also popular with a wide variety of non-Asian shoppers, ranging from foodies who love the fresh meats, produce and seafood, as well as the authentic Asian products, to bargain hunters. The supermarkets offer basics like rice, eggs and other commodities used in high volume by Asians -- and many others -- at low prices. As a result, shoppers of all ethnic backgrounds shop the stores for many of these products as a secondary shopping venue.

Additionally, many of the hundreds (probably thousands) of owners of Chinese and other Asian cuisine restaurants located in the seven million population-strong San Francisco Bay Area shop at 99 Ranch Market and similar large Asian specialty supermarkets to supply their restaurants in part , adding an additional customer base to the stores.

The 45,000 square-foot 99 Ranch market supermarket in Pleasanton's Rose Pavilion Shopping Center is anticipated to open in the fall of 2010, according to the announcement from Centro Properties. There's a 99 Ranch Market store that opened in 2007 next door in the city of Dublin.

Fresh & Easy Buzz was in the Bay Area this week as part of a visit throughout the the region and the Central Valley, and we viewed the planned Tesco Fresh & Easy and 99 Ranch Market store locations in the Rose Pavilion Shopping Center in Pleasanton. When both stores are open, they will add a complete food and grocery retailing mix to the center, which currently doesn't have a supermarket of any kind in it.

Safeway Stores, Inc., which is the food and grocery sales market share leader in Northern California, has its corporate headquarters, along with its Northern California Division headquarters, combined together in Pleasanton. In fact its corporate campus isn't far from the Rose Pavilion Shopping Center where Tesco plans to locate its first Fresh & Easy store in the city.

In fact, Safeway plans to soon start construction in its hometown of Pleasanton on what will be its Northern California flagship supermarket.

The about 60,000 square foot store will be one of the grocer's most modern in its Lifestyle format; a full-service superstore with numerous added features in the areas of fresh, prepared foods, perishables and specialty departments, and including an extensive selection of natural and organic products. The new supermarket is part of a large development not far from its corporate headquarters that Safeway owns much of and is co-developing through its real estate division.

That new, flagship Safeway supermarket will likely be open and operating by the summer of 2010, when Centro Properties says the Fresh & Easy market in the shopping center is likely to open. Of course, when it comes to Northern California, where Tesco has postponed its launch, which should have been well under way by now, we wouldn't hold steady to dates, although that one is far enough away to be more realistic.

Safeway operates about 1,750 supermarkets in the U.S. and Canada, including 500-plus stores under the Safeway, Vons, Vons Pavilions, Pak-N-Save and The Market banners in California, Nevada and Arizona, which are the three states where Southern California-based Tesco's Fresh & Easy Neighborhood market has its current 118 Fresh & Easy grocery and fresh foods markets located in. The California Fresh & Easy stores are in Southern California and Bakersfield (three units), southern Nevada and Metropolitan Phoenix, Arizona.

If you read through Fresh & Easy Buzz (and view the story links at the end of this piece) you will notice a number of reports and stories focused on Northern California over the last couple weeks. That's because Tesco's Fresh & Easy started picking up its pace of activity in Northern California, which is the only upcoming new market we are aware of on its near-term strategic planning screen, in about February, based on our research.

We would suggest viewing that as a sign that an announcement could come in the not too distant future about the retailer's plans as to when it plans to open its first stores in Northern California. It's paying monthly leases on numerous stores in the region; as many as 50 based on our reporting and research. And it has been paying the monthly leases on a number of those stores for over a year. Opening some stores is the only way to generate cash flow, after all.

We don't see the first Northern California Fresh & Easy stores opening within the next couple months though, based on our source information, reporting and research. But stay tuned.

>April 14, 2008: New Multi-Supercenter and Multi-Format Strategies Are Showing Wal-Mart to Be A More Agile Grocery Retailer in the U.S.