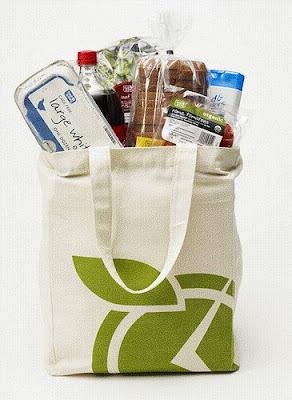 In addition to using flikr.com for photographs, Tesco's Fresh & Easy has a page on YouTube for company and store-related videos, and it has a feed on the super-popular social media micro-blogging site Twitter.com, as Fresh & Easy Buzz was the first publication to report in this September 10, 2008 story: [Tesco Fresh & Easy Neighborhood Market's Politically-Connected Public Relations Firm APCO Worldwide. Also see - January 18, 2009: The UK Telegraph Reports on Tesco Fresh & Easy's Use of Twitter.Com; Since Fresh & Easy Buzz Was First to Report it, We Offer Some Added Value.]

Tesco Fresh & Easy's use of flickr.com is a good idea for many reasons, in our analysis and opinion.

For example, It costs nothing. There's no charge to create a page on flickr. That's as low cost and high-impact as a marketer can get.

Additionally, the site offers a way to put visual images of Fresh & Easy, its stores and its employees online (a picture can be better than a 1,000 word press release at times) for "all" to see. It leverages the Fresh & Easy visual image beyond its stores and controlled forms of media -- advertising, brochures and the like.

The flickr.com site has millions of users. A decent percentage of those users are in California, Nevada and Arizona, the three states where Tesco has its current 119 small-format Fresh & Easy grocery and fresh foods markets.

The flickr.com photo social media site also allows users to post comments on every picture on the site -- that's the social media aspect of it.

For example, iKristen likes the Fresh & Easy reusable canvas shopping bag pictured at the top of this story. In fact she wants to buy one. So she posted a comment on the photo at the Fresh & Easy photo-page on flickr.com earlier today. Her comment: I really like this bag, Where can I get it? Here is the photo and her post on the page.

iKristen covered her bag-desire-bases using Twitter, just in case. She "tweeted" (posted) her bag question to Fresh & Easy's Twitter.com feed, asking: @Fresh_and_Easy Where can I get that tote bag with the clock on it? about 10 hours ago from TweetDeck in reply to Fresh_and_Easy.

And Fresh & Easy replied back to iKristen on its Twitter.com feed regarding her bag question, "tweeting back": @iKristen you can get the tote with the apple clock up where the rest of the canvas bags are sold (by the check outs). Its my fav bag too! about 9 hours ago from web in reply to iKristen.

The iKristen-Fresh & Easy Neighborhood Market social media site exchange is a nice illustration of what we mean when we talk about the direct communications and marketing power of social media sites for retailers -- and for consumers.

Suggestion to Tesco's Fresh & Easy: Send iKristen one of those F&E reusable canvas bags with the clock on it as a freebie. She deserves it for all the positive publicity given on Twitter and flickr. And as a good social media networker, she will tell others about getting the bag for free.

Tesco's Fresh & Easy also has a note on each photograph on its flickr page that gives permission to third parties to use (for non-commercial use) the photos, as long as they credit the particular photograph(s) to Fresh & Easy Neighborhood Market.

This is a good idea because the flickr page could for example serve as a central visual image "clearing house" for editors, Bloggers and others looking for photographs to use.

But most important, using the flickr.com site allows an additional social media-marketing venue for Tesco's Fresh & Easy. A number of grocers, like Whole Foods Market, Inc., have been using flickr.com for a long time. In Whole Foods' case, doing so has worked well for the natural foods grocery chain. Whole Foods' also uses Facebook, in addition to flikr and Twitter.com

There are also strong social media and marketing synergies for Fresh & Easy and any other grocery chain using flickr.com in conjunction with other sites like Twitter, YouTube or Facebook. The sites can be linked, for example. And content can be shared by a grocer across however number of social media sites it uses.

Tesco's Fresh & Easy links its flickr photo page, as well as its Twitter feed and YouTube page, on its "Talking Fresh & Easy" corporate Blog, on its Web site. This is something numerous other grocery retailers are doing as well. Doing so can be a social media force multiplier for a retailer.

Social media sites like Twitter, Facebook, flickr, YouTube, Brightkite.com and others offer food and grocery retailers (and others) an opportunity never before presented to not only communicate with customers and potential customers for minimal cost but to do so in direct ways that advertising and traditional public relations methods -- going through third-parties like newspapers and other media -- can't achieve.

For example, Whole Foods Market used its Twitter.com feed, linked to its "Whole Story" Web site Blog, to provide real time updates on the recent peanut butter product recall, to the hundreds of thousands (nearly 528,000 as of this afternoon) of followers of its Twitter feed. It did so again just recently when some of the pistachio nuts it sells in its stores were recalled.

Fresh & Easy uses its Twitter.com feed for a variety of things, including to announce in advance when it is opening a new store in California, Nevada or Arizona, to offer online store coupons [March 11, 2009:A Fresh Freebie: Tesco Fresh & Easy Offering Online Coupon Good For Free Reusable Canvas Shopping Tote Bag] and to ask followers for suggestions.

The use of social media sites by food, grocery and other format retailers is in its infancy. Like social media itself, the grocer pages and feeds are evolving. It promises to be an important and interesting evolution -- and Fresh & Easy Buzz will be here to participate in it and write about it.
Related Stories: