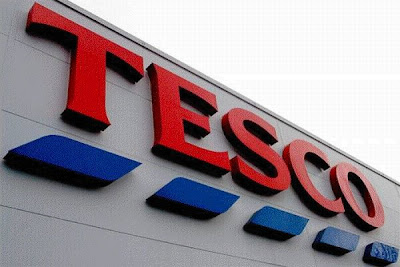 Tesco is the third-largest retailer in the world, after number one U.S.-based Wal-Mart Stores, Inc. and number two Carrefour Group, which is headquartered in France. Tesco also is the leading food and grocery retailer in the United Kingdom.

In the investor note, J. P. Morgan said Tesco's overall market basket pricing (everyday store prices) in the UK market is too high relative to its top competitors, which are Wal-Mart-owned Asda, Sainsbury's and the Morrisons supermarket chain, often collectively referred to in Britain UK as the "big four" supermarket chains."

Additionally, J. P. Morgan said in the rather critical investor note that Tesco-UK's promotional and related programs are "too complex," and that the retailer is making a mistake by letting "the margin dictate the strategy."

The investment bank's analysis was prompted in part we believe by quarterly UK market share numbers that were released on April 1, which found Tesco losing share to top rivals Asda and Morrisons, something the UK's leading supermarket chain has been doing for about a year.

Tesco continues to lose market share to rivals Morrisons and Asda, according to Nielsen data for the 12 weeks to March 21.

Sales in the UK food and grocery sector grew at 2.7% year-on-year in the first quarter of 2009, with the grocery multiples faring slightly better (up 4.4%) over the same period, according to Nielsen Scantrack data released on April 1.

Of the "big four" UK supermarket chains (Tesco, Asda, Sansbury's and Morrisons), Morrisons leads the pack with 6.9% year-on-year sales growth, followed by Asda (up 6.7%). Tesco continues to lose market share with almost a half percentage point decline to 27.6% for the quarter, with Asda and Morrisons each picking up 0.2 points, according to Nielsen.

Asda and Morrisons, along with small-format, hard-discount retailers Aldi and Lidl, have been steadily taking share away from Tesco for about one year in the UK.

But at 30.4%, Tesco remains hands down the leading food and grocery retailer in Britain. For example, number two Asda has about a 17.6% overall share, while number three Sainsbury's has about 16%. Morrisons is the nation's number four market share chain. It has an about 12.5% total share of UK food and grocery sales.

Despite this fact, that Tesco retains a huge market share lead, the loss of share is a major concern for Tesco, or at least should be. In the high volume, low margin supermarket business, every share point represents lots of lost sales. And the fact key rivals Asda and Morrisons continue to take share away from Tesco on what now seems to be a regular basis should be serious cause for concern because its ongoing rather than sporadic share erosion.

The critical report issued last week from J. P. Morgan, coming just prior to the annual end of the fiscal year financial reporting, isn't a positive development for Tesco.

J. P. Morgan also sounds an alarm in its investment note over Tesco's U.S. Fresh & Easy Neighborhood Market food and grocery chain. The investment bank predicts Fresh & Easy will post a loss of £100million (pounds) (about $150 million) in the next fiscal year.

Fresh & Easy Buzz basically agrees with that number, although we actually think Fresh & Easy's loss could be a bit higher than the £100million (pounds), or about $150 million.

Further, we don't see any signs that Tesco will stop burning cash anytime soon with Fresh & Easy, although it is conserving some cash by postponing new store openings and its launch into Northern California.

We aren't sure about J. P. Morgan's argument that Tesco is letting margin rule its strategy in the UK. While it is true the retailer has lost about one full point in market share to its key rivals over about the last year, in the grand scheme of things it isn't clear to us that reducing margins, which is the implication of the J. P. Morgan argument, would (1) have stemmed that market share loss and (2) been worth it even if hypothetically the result of a significant margin reduction would have been say losing only half the about 1% market share amount over the year.

Margins matter; even in a recession. A significant percentage of Tesco's market share loss over the last year has come from the German hard-discount grocer Aldi-UK, which operates a no frills, low price-focused model. We doubt margin reduction for Tesco would have stopped this. Aldi is fast-growing in the UK. However, because of its relative small store count in Britain is has only about a 3% overall market share, which is excellent for the number of stores the grocer operates in the country.

Another significant percentage of the market share loss comes from Wal-Mart-owned Asda, which is a discount-focused operator. While we think some margin reduction by Tesco might have prevented some share loss to Asda, it's important to note that Asda is doing lots of correct things these days in the UK market, and therefore market share is a logical result of the supermarket chain's excellent merchandising and operations performance over the last two years.

And Morrisons, which has been the leading gainer among the UK's "big four" supermarket chains for sometime, is on a roll; it seems to be doing everything right. Would margin reduction by Tesco, resulting in lower everyday prices in its UK stores, have been enough, or will it be enough, to stop Morrisons' roll? We doubt it.

Interestingly, Tesco has been reducing margins at least a little bit of late. It has to be because the retailer has been lowering everyday prices, putting greater emphasis on a lower margin discount store brand, and offering far deeper price promotions than it has in the past in the UK.

We suspect further price reductions are in store for Tesco as well. It will likely do what it has to to stem the market share loss in its home UK market, which represents a very high percentage of the company's overall annual sales and profits.

But Tesco's release of its fiscal year financials later this month will help make more clear the margin issue. If profits are good, margin reduction as a way to stem the market share loss the retailer has been experiencing, will take second or third fiddle, in our analysis.

nice to see the cracks in this vile business model.
its aims of global domination will
surely tumble around its ears,as have many retailers who have tried to take on the states.