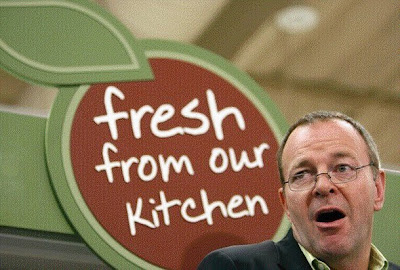 Tim Mason (pictured above in front of the "fresh from our kitchen" sampling kiosk in a Fresh & Easy market), the CEO of Tesco's Southern California-based Fresh & Easy Neighborhood Market grocery and fresh foods chain, and who also is a director of United Kingdom-based Tesco PLC, yesterday (Wednesday, April 22) sold 631,381 ordinary shares of Tesco PLC stock at 350. 30 pence each, resulting in a financial gain of £2.2 million (British pounds) -- about $3.2 million U.S. -- according to a regulatory filing financial press release issued today by Tesco PLC. [You can view the release here.]

FYI: The International Supermarket News website posted your story verbatim without mentioning Fresh & Easy Buzz, except they edited out where you mention your past story in Fresh & Easy Buzz. Your link to that past post that you have in it.

That link didn't work well. Here it is again:

And yes, it is our story reprinted verbatim without mention, and someone edited out the link to the past Fresh & Easy Buzz story referenced in the piece so that it doesn't id the Blog as the source.

We wrote the editor of the Website about it. Will let you know if we get a response.