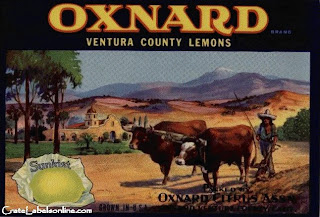 The city of Oxnard, California Planning Commission heard a request by a developer last Wednesday night (November 19) to change the Ventura County city's general plan and current zoning regulations to allow for a 77,697 square foot parcel of land at the southwest corner of Rose Avenue and Gonzales Road, which would be co-anchored by a new Fresh & Easy grocery and fresh foods market, in the city to be developed into a shopping center called The Rose Ranch Shopping Center, according to the city agenda for last week.

At present the city's current general plan and zoning restrictions for the area don't allow for a center of the size and scope of the proposed Rose Ranch to be constructed at the location.

The nearly 10 acre shopping center would have a Fresh & Easy Neighborhood Market grocery and fresh food store and a Walgreen's drug store as the retail anchor tenants.

Additionally plans call for the new center to also include a retail bank and a restaurant. Additionally, the remaining about 37,000 square feet would be marketed to a variety of smaller retail shops and related businesses, according to the proposed plans.

At the Oxnard Planning Commission hearing on Wednesday night the city planning board also got its first look at an environmental impact report the developer had prepared for the proposed Rose Ranch Shopping Center. No decision has been made yet in terms of approving the plans.

The proposed Rose Ranch center has to first gain approval from the planning commission, which then if it gives its approval to the developer and Tesco Fresh & Easy's plans for the store, turns it over for review and ultimately a vote by the Oxnard City Council, which has final approval on any commercial developments in the city.

Oxnard is located about 60 miles northwest of Los Angeles on the Southern California coast. The Ventura County region in and around Oxnard produces some of the finest strawberries and citrus fruits such as organges, lemons and limes in the United States, along with a number of other premium crops that thrive in the region's good soil and coastal climate.

>May 2, 2008: More Critical Mass in the Neighborhood: A New Fresh & Easy Grocery Store to 'Sprout' In the Southern California Central Coast City of Lompoc