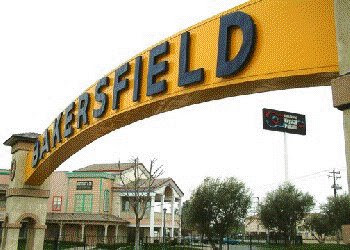 Tesco's Fresh & Easy Neighborhood Market announced today it will open the first of its thus far five confirmed stores in the Bakersfield, California Metropolitan region market on December 3, 2008, less than a month from today.

The two Fresh & Easy combination grocery and fresh foods markets set to open on December 3 will be in the city of Bakersfield. One store is at Olive Drive & Jewetta Avenue in the city, the other at Panama Lane & Stine Road.

Bakersfield is located in the southern portion of California's Central Valley

The two Bakersfield Fresh & Easy food and grocery markets will be the first California stores for the grocery chain outside of the Southern California market region.

Plans call for opening stores throughout the Central Valley, including the Fresno region north through Merced, Stanislaus, San Joaquin and Sacramento counties, and into the San Francisco Bay Area, as we reported and written about previously. [See the links at the bottom of this post for additional information.]

The other three confirmed Bakersfield Metropolitan region Fresh & Easy stores are at the following addresses in the following cities:

These three Fresh & Easy stores are set to open early next year.

Below are the five Bakersfield Metropolitan region Fresh & Easy store locations we reported on over eight months ago:

As you can see, we got all five locations right in March.

We also reported in our March 10, 2008 piece that "The first of the initial six Bakersfield region Fresh & Easy grocery stores could open as early as the end of this year."

[Note: The stories linked above contain extensive information on the Bakersfield Metropolitan region in general and the Bakersfield food and grocery retailing market specifically.]

>May 10, 2008: New Markets: Tesco's Fresh & Easy to Move Into Modesto, California Market; Open its First Store in the City Early Next Year