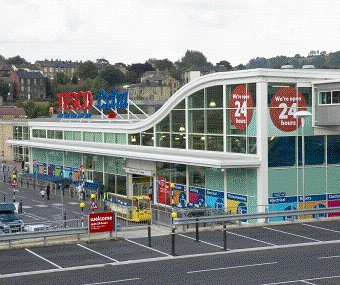 United Kingdom-based Tesco, which owns and operates Southern California-based Fresh & Easy Neighborhood Market, which currently has 100 stores in Southern California, Nevada and Arizona USA, is set to report next week its worse sales performance since the early 1990's, according to reports today in a number of major British newspapers.

The UK Guardian and other British papers are reporting Tesco will report third quarter same store sales growth of just 1.9% next week, which would be the global retailer's worse financial performance since 1992, when Britain and the U.S. were last gripped by a serious recession.

The UK, like the U.S. and other countries, is currently battered by a global financial crisis and recession, which is taking it's toll on many retailers, although a few global discounters such as Wal-Mart Stores, Inc, (the world's number one chain), which recently reported a 10% gain in its most-recent quarterly profits on top of same store sales growth, are fairing much better.

UK analysts say Tesco is being hit not only by the macro-economic reality of the financial crisis and recession, which is resulting in consumers cutting back on all spending, including for food and groceries, but also by competitive pressures from discount food retailers in Britain like Wal-Mart-owned Asda and Aldi, Lidl and Netto, which have been in the case of Asda slashing prices and in the case of Aldi, Lidl and Netto operate on a no frills, hard disount format and everyday low-pricing structure.

Nick Mathiason, a business reporter and 'The Observor' columnist, for the UK Guardian, who has been covering Tesco and the other UK food and grocery retailers for sometime, writes in his column today that: "Analysts believe the UK's biggest retailer Tesco (which has a 31% share of the nation's food and grocery market) has been fighting the wrong war as it rebrands itself as the country's 'biggest discounter' in a battle to protect its dominant market share. It has also been hit by problems expanding abroad. In particular its forays into Thailand and America have not gone according to plan."

The foray into America the UK analysts are referring to of course is Fresh & Easy Neighborhood Market.

We've been watching Tesco closely all year, both in the UK, U.S. and elsewhere in the other 12 countries it has retail stores in. In terms of its UK franchise, we aren't sure the retailer has had much choice but to slash everyday prices in its stores and position itself as more of a discount-oriented chain. After all, Wal-Mart's Asda has been doing just that since late last year. Asda's efforts to lower thousands of prices, promote more heavily and up its value proposition dramatically have been a success and allowed it to take a bit of market share from Tesco and take even more from number three UK chain Sainsbury's.

Additionally, the UK's top three no frills, small-format discount grocery chains, Aldi, Lidl and Netto, have been gaining share since late last year. The volume of these three discount chains has been growing even faster since September when the financial crisis began to rear its head in the UK and U.S. The three hard discount chains combined only hold about 8% of the total UK food and grocery market, compared to Tesco's about 31%.

However, they are among the fastest growing chains in the country in terms of opening new stores, and the small-format, hard discount segment which they play in is the UK's fastest-growing retailing segment for food and grocery shoppers. Therefore they may be small-format and small market share players -- but they represent a mighty challenge to Tesco, as well as Asda, Sainsbury's and others.

The relative success of Asda, Aldi, Lidl and Netto, which has come as UK shoppers look for the lowest prices available, has demonstrated that discounting is where it appears to be at currently in the nation's food and grocery retailing industry. Our analysis is had Tesco not started slashing prices and positioning itself as more of a discount chain earlier this year, which was far later than Asda did for example, it might be reporting a negative sales number (loss) for the third quarter next week rather than the slim 1.9% increase being predicted by UK analysts.

As we've reported and written about extensively in the last few weeks, Tesco's Fresh & Easy Neighborhood Market CEO Tim Mason announced recently the Southern California branch of Tesco would slow down its new store growth in the Western USA, including postponing its launch into the Northern California market for an undetermined amount of time. The first Northern California stores were set to start opening in the first quarter of 2009.

Tesco, which operates nearly 4,000 stores in 14 countries and employees about 440,000 people, also recently announced sales at its South Korean retail stores were off considerably, and that it would slow new store growth there as well.

These two announcements, the U.S. and South Korean slowdown, are part and parcel of the overall drop in sales globally for Tesco, which it will demonstrate when it announces its third quarter sales next week.

Many of Tesco's stores in the UK and globally are Supercenters or Hypermarkets which sell lots of general merchandise -- clothing, consumer electronics and durables like furniture and household goods -- and therefore depend on the Christmas holiday season for a sales push in these categories. With most analysts predicting a poor Christmas sales season in the UK, like elsewhere throughout the world, Tesco likely will find its fourth quarter performance not much better than its third quarter.

But competitive pressure, and not just from Wal-Mart's Asda and the big three small-format, no frills discount grocers mentioned above is having a serious negative effect on Tesco. Something else seems to be in the works. For example, after struggling for most of the earlier part of this year, Sainsbury's, the UK's number three chain, reported a whopping 13% profit hike earlier this month. And Morrison, the UK's number four grocery chain in terms of market share, is expected to report a 7.2% gain in profits for its third quarter when it reports later this month, according to industry analysts.

In addition to these serious competitive challenges at home in the UK, along with stagnant sales in parts of the world like Asia, it's our analysis that continued loses and expenses at the U.S. Fresh & Easy Neighborhood Market chain are putting a drag on Tesco. Strong corporate sales growth can help a low tide like Fresh & Easy. However, with sales growth of only 1.9% for the third quarter, significant losses like Fresh & Easy continues to have becomes a much bigger overall concern.

Another concern is Tesco's share price. Shares in Tesco have dropped by 40% over the last year. Part of the dramatic drop in Tesco stock is due to a new law passed by the UK's competition commission which will restrict the number of new stores Tesco can open in the UK from next year on out.

Because Tesco is the nation's dominant food and grocery retailer -- it has an about 31% share compared to number two Asda's about 17% and number three Sainsbury's about 15%, for example -- the chain is the most affected by the new anti-competitive, anti-retail monopoly law. Both Asda and Sainsbury's essentially can open as many new stores as they previously have planned to since they have far fewer UK units than Tesco. To put it in perspective, Tesco has at least one store in every city and town in the UK, about 1,800 total in a country with not many more people than California has.

>Guardian.co.uk: Tesco posts worst figures in 16 years
>Reuters - UK: Preview-Tesco to report slowest UK growth since early 90s
>The Times - UK: Tesco hit by fears of first fall in profits for 15 years
>Guardian.co.uk: A Nightmare on the High Street as shops fall like dominoes
>Scotland on Sunday - UK: Mixed bag of results expected from supermarkets
>The Times - UK: Tesco can still deliver the goods
>Natural~Specialty Foods Memo: Retail Memo: Woolworths, An American Chain Imported to the UK and Embraced By the Brits as Their Own Dear 'Woolies' Puts its 815 Stores Up For Sale
>The Times - UK : Will anyone scoop up worthless woolies?
Posted by Fresh & Easy Buzz at 7:33 PM