Earl Grey Returns for the Holiday: Thanksgiving With A Slice of 'Rye'

Since unlike most holidays, the centerpiece of Thanksgiving Day is food, and lots of it -- Fresh & Easy Buzz asked me, the Blog's now very occasional United Kingdom-based correspondent, to bring its readers some food-related news and reports about the Thanksgiving holiday -- with a focus on the lighter side 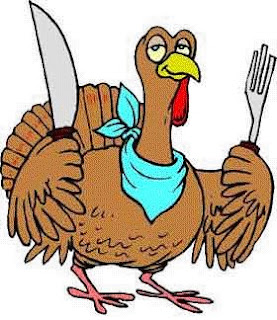 . I agreed since I thought the writers and editor deserved to celebrate Thanksgiving and therefore could use a little time off. Plus, since I last wrote a piece for the publication here, this is the first time they've asked me to contribute since.

Below are a selection of news items, lifestyle-oriented reports and offbeat informational morsels for Thanksgiving Day, from yours truly Earl Grey, live from the UK.

Thanksgiving live: First up, in this world of real-time Blogging (I'm on the terrace in my boxer shorts sipping tea right now, for example), it's should be no surprise that many Bloggers are "Liveblogging" Thanksgiving. Among those are the Food Bloggers at the hallowed "Grey Lady," the New York Times.

You can check out and read the NY Times' Food Bloggers' Thanksgiving "Liveblogging" at this link: http://dinersjournal.blogs.nytimes.com/200. (I can't help wondering what the Times' "Livebloggers" are wearing right now?) On second thought (see my on terrace drinking tea comment above) maybe "Liveblogging" falls under the TMI (too much information) category in many ways.

Variations on the holiday bird in T-minor: Tired of preparing your Thanksgiving Day turkey the same old way? Never fear. Check out a few Unorthodox Turkey Recipes . They aren't for the traditionalist though. PS: I kind of like the Turkey Cannon.

A bird stuffed in a bird, stuffed in a bird and wrapped in bacon: Speaking of non-traditional Thanksgiving dinner center of the plate items, the Turbaconducken, pictured above, (also called a Turkenducken) might be your answer. The turkey stuffed with duck, stuffed with a chicken and then wrapped in bacon has been a popular holiday treat in places like New Orleans for decades. (I spend half my time in the U.S., so know such facts.) In recent years its started to catch on elsewhere around the United States.

I doubt most Americans will be taking their turkey multi-bird, turbo today, but it is different -- and tasty in fact. It also offers eaters a bird trifecta with each bite -- turkey, duck and chicken all together at the end 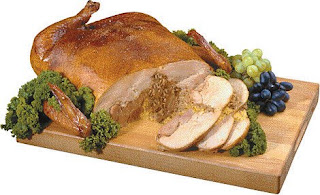 of a fork. And of course the bacon wrap adds a delicious fat element to the turbo bird dish. After all, why baste the bird over and over with butter when you can wrap bacon around it, which provides not only a better taste then a butter baste in my humble opinion, but lots more fat as well. It's a holiday after all. Splurge a bit. By the way, here in the UK we wrap our birds in bacon often. I know it's very uncommon to do so in the States but you might give it a try sometime.

Come to think about it, Tesco's Fresh & Easy Neighborhood Market is offering whole turkeys wrapped in smoked bacon and sage for $2.29 pound for Thanksgiving. Therefore all last minute shoppers need do is pick-up a whole chicken at the Fresh & Easy, along with the bacon-wrapped turkey, and find a duck, and you've got at least 30% of your Turbaconducken ready to go. Just stuff the turkey with the duck stuffed with the chicken and bake. Good to go. More at: neatorama.com.

Bacon totalitarianism: And while on the topic of bacon, sometimes people can take what is a fat-laden but tasty meat product just a little bit to far, like here. I don't approve of such humour, nor do I suspect the bacon industry trade association does either.

The silent chef: Speaking of Thanksgiving recipes and dishes, celebrity chef Rachael Ray has been doing nothing but talking about the holiday meal, along with preparing entree after entree and side-dish after side dish holiday recipes on her television shows for the last couple weeks. She's a one-woman holiday talking and cooking fest, she is.

But it appears Rachael Ray won't be doing all that cooking and TV-talking for the upcoming Christmas holiday. The "Queen of Cuisine" and "Diva of Dining" is having vocal chord surgery, which means no talking following the procedure. She's says she will even have to communicate with her husband by writing notes. I bet he is heartbroken over that.

The celebrity chef won't be returning to the airwaves until January, 2009, which means her millions of viewers will have to find an alternative idea-source for their Christmas meals. Read about Rachael Ray's vocal chord surgery here.

I think the culinary-talented and dynamic Ms. Ray (she's no Nigella Lawson though) should let a loss of voice stop her from doing at least a few pre-Christmas holiday shows though. After all, every television set today has closed-captioning text. She can write out a script and have it text-messaged across the bottom of the TV screen. Or why not hire a spokesperson to read her prepared text as she cooks? Or why not a completely silent cooking show, which would stimulate viewers imaginations if nothing else. Call it "Rachel Ray: The Silent Chef" for the month of December

Tiny kitchens rule in the new, down-sized America: Since we're on the topic of television cooking shows, which are very popular during the fall holiday season, don't you sometimes get just a bit jealous of the spacious, fancy kitchens with miles of counter space the celeb chefs like 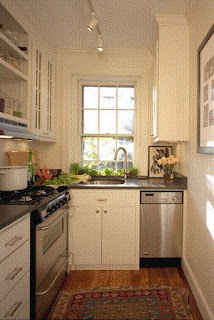 Emeril, Wolfgang Puck and other TV cooking stars get to use while preparing the recipes for viewers? After all, it's easy to make all those great creations when you've got a huge kitchen with all the latest equipment and miles of counter space, which few of us have got at home.

Well, a New York Times food section recipe tester felt the same way some of you might feel, so she launched the "Tiny Kitchen" cooking series on the Web. The tiny New York City kitchen used on the show has a grand total of two feet of kitchen counter space. Try being a star in that tight space Emeril. (Emeril is from New Orleans, by the way, and knows his way around stuffing turkeys with ducks and chickens better than most.)

You can view the "Tiny Kitchen" cooking videos here, as well as read about the series. The series makes sense in these bad economic time when everything is getting smaller -- bank accounts, houses, cars (and kitchens of course) -- and more.

Cupcake mania: Bank accounts, houses and cars and kitchens aren't the only things getting smaller -- so are cakes. For those not in the know, one of the hottest food trends in America right now is the cupcake. And not just a plain old cupcake, made with Betty Crocker cake mix and ready-to-spread frosting. Instead the gourmet cupcake, popularized by such cupcake-centered bakeries like Sprinkles in Los Angeles, are what's hot. After all, even in a bad economy, people can spend three or four bucks for a gourmet cupcake, such as Sprinkles' famous Red Velvet little sweet treats, and feel like they've indulged.

Therefore it's no surprise to me that cupcakes are popular this Thanksgiving, even though pumpkin pie usually is the dessert of choice around Thanksgiving dinner tables today. Lots of folks were even making a "pilgrimage" to the various Sprinkles cupcake bakeries in Los Angeles 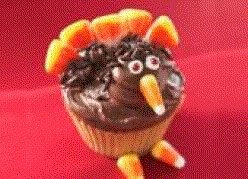 yesterday, stocking up on Sprinkles' Thanksgiving Pumpkin and Pecan cupcakes, for example, one of my Southern California sources told me last night.

Even that elder-stateswoman of TV cooking and entertaining shows, Martha Stewart, created a variety of Thanksgiving cupcakes this year for the original American holiday.

You can check out all the buzz about Thanksgiving cupcakes from Martha and others here.

Who let the dogs out? In closing I would be remiss if I didn't write about two things. First, one can't write about Thanksgiving dinner and the holiday in general without an item about wine, which I will do briefly. Second, as a retired professional journalist turned consultant to the tea industry (what else do you do for a second career with a name like Earl Grey?), I'm partial to what we in the trade call "Dog Bites Man" and "Man bites dog stories." It just so happens I can (sort of) combine those two things, Thanksgiving and wine, and man and dog stories, in this item below:

A wine with a bark and a bite: As much as we all would like to forget it, I'm sure most of you remember the case of former NFL football star Michael Vick and his Pit Bull breed dogs. It appears some people not only remember the sad incident, they've also decided to memorialize the case of Michael Vick and his Bad Newz Kennels. And they done so in a odd way: By creating the Vicktory Dogs Wine Collection which features 22 wines, each named for one of the Pit Bull's rescued from Michael Vick's Bad Newz Kennels. The wine is a 2003 Syrah, which those who've tasted it say is pretty good, if you can get over the whole Michael Vick/Pit Bull incident.

Read all about the Michael Vick-inspired new line of 22 wines, which have a portrait of each of his Pit Bull dogs (22 in total) on the labels, here.

Signing off: To borrow a line from that guy on American Idol, no not the great British export Simon Cowell, the other guy, Ryan Seacrest -- 'Earl Grey Out.' Happy Thanksgiving!

PS: Make sure to end your Thanksgiving Day meal and dessert with a spot of tea. My suggestion: Earl Grey of course.
Posted by Fresh & Easy Buzz at 2:17 PM

I'd give a big "no" to tiny kitchens, myself. My Grandmother's house, which is dated around the late 60s, had one. While its convenient in that you can basically stand in one place and rotate to reach oven, sink, appliances, and shelves; it also stunk because there was only enough room for one person to be productive in there. Consider that the cabinet and floorplan dimensions aren't convenient for even the smaller of today's fridges, and you can see problems.

I guess what I'm really saying is, small kitchens are great if you're living alone.