Fresh & Easy Buzz Friday Essay: As Warren Buffet's Berkshire Hathaway Goes, So Goes America; But Like the Eternal Optimist Buffett is, 'Yes We Can' 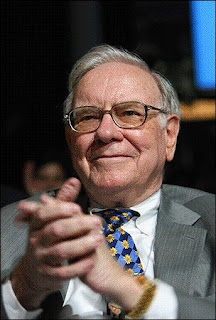 It appears even America's smartest and wisest investor, Berkshire Hathaway, Inc. founder and Chairman, and major Tesco plc shareholder Warren Buffett, isn't immune from the United State's (and now the world's) worst financial crisis since the 1930's great depression and the stuck dead in the mud U.S. economy.

Berkshire Hathaway's third quarter operating earnings fell 19.3 percent to $1,335 a share from $1,655 a share in the same period the year before, the company reported today.

That's below the average forecast of $1429 from the two top analysts following the stock, as tracked by Thomson One Analytics.

Berkshire Hathaway owns a number of companies in the insurance industry, which is fairing about as badly as the financial services industry is in the current domestic and global financial crisis and recessionary economy.

Overall, Berkshire Hathaway's net earnings plunged a whopping 77% to $1.06 billion ($682 per share) from $4.55 billion ($2942 per share.) A major factor behind these numbers are investment and derivative losses of $1.01 billion, compared to gains of $1.99 billion in last year's quarter.

The derivative portion of the gains and losses are on paper only. Buffett said the derivative contracts held by Berkshire will eventually be profitable, but right now they're losers, as they are for everybody who is holding them.

Berkshire Hathaway said today in a statement its net worth declined slightly to $120.15 billion over the first three quarters of the year. But it adds that net worth fell by roughly $9 billion in October amid all the carnage in the financial markets. That's not the kind of October surprise Warren Buffett, the "Oracle of Omaha" likes to receive.

Click on the links below for additional coverage of Berkshire Hathaway's 77% drop in third quarter earnings:

Warren Buffett holds about $1.4 billion in Tesco plc stock, which amounts to an approximate 3-4% ownership stake in the company, which is the third-largest food, grocery and general merchandise retailer in the world. United Kingdom-based Tesco owns and operates Fresh & Easy Neighborhood Market in the Western U.S.

Berkshire Hathaway's 77% third quarter earnings plunge demonstrates that not even one of the world's smartest, best and most prudent investors, Warren Buffett, is immune from the potentially negative investment results which are becoming a part of the most serious financial crisis in the U.S. since the great depression and recessionary economy gripping America and the world.

Unlike the investment banks that have now either been acquired for pennies on the dollar or have merely gone away, Buffett is a prudent investor. His Berkshire Hathaway, Inc. holding company owns "main street" companies, about 60 of them, including food and grocery industry sector companies like convenience store wholesaler McLane Company, candy maker and retailer See's Candies, and the International Dairy Queen, Inc. fast food chain.

For example, Berkshire Hathaway also owns a number of home building and related construction industry companies, a couple business services firms, additional insurance companies, furniture and jewelery retailers, and other main street-type companies that are seriously hurt when consumers have little money to spend and credit is super-tight. [Click here for a complete list of companies owned by Berkshire Hathaway.]

Warren Buffett was characteristically himself today though, despite Berkshire's Q-3 77% earnings drop. Still bullish on the stock market and optimistic about the future of the U.S. economy. Still looking to acquire new companies and get in on what he says are numerous great investments out there right now in companies that are seriously undervalued for the long term. And doing what he can to help the economy and country along.

In fact, Warren Buffett spent most of the day today in Chicago with U.S. President-elect Barack Obama, former chairman of the U.S. Federal Reserve Paul Volker, former U.S. Treasury Secretary (and current Chairman of Citicorp's executive committee) Robert Rubin, former head of Treasury and ex-president of Harvard University Larry Summers, and a group of other top Obama economic advisers, discussing and mapping out strategies to get the U.S. out of the current financial crisis and economic recession.

What Berkshire Hathaway's 77% drop in third quarter earnings should demonstrate to these policy makers giving advice to the new President-elect, and offer to those who don't think the U.S. is really in a historically severe financial and economic crisis situation, is to hammer home the urgency of the situation and the urgency of solving it.

After all, if a holding company, Berkshire Hathaway, owned and operated by a prudent, wise and historically successful investor, Warren Buffett, with arguably the best track record in the world, can experience such a dramatic drop in quarterly earnings, it means the financial crisis and economic meltdown has fully hit main street.

Things are unfortunately going to get a whole lot worse -- more firings and thus increased unemployment, continued tight credit, more business failings and more debt for taxpayers -- before they get better. This is especially true of unemployment, which is always a lagging indicator in a recession.

That's why it was good to watch President-elect Obama focus like a laser beam at his economic press conference in Chicago today, along with seeing Warren Buffett standing behind him with many other smart and good men and woman, Democrat, Republican and Independent.

President Franklin Delano Roosevelt (FDR) assembled what historians later came to call his "Brain Trust" to advise and help him pull the United States out of the great depression in the 1930's. FDR's "Brain Trust" included Democrats like himself and Republicans like the challenger he beat to win the Presidency of the United States.

We were pleased to see President-Elect Obama's version of his "Brain Trust" standing behind him at the press conference this afternoon. He's reached out and brought in some of the best and the brightest -- and is preparing well to hit the ground running in 74 days, when he becomes the 44th President of the United States.

Regardless if we share President-Elect Obama's politics completely or not, it would be wise to get behind him to solve the current financial crisis and recession. It's our (taxpayer's) money that will be used to do so after all, as already is the case with President Bush's $700 billion taxpayer-financed financial institutions bailout package.

Obama is approaching the economy in a much more serious and measured way though. And he is bringing in a bi-partisan group of experts, his version of FDR's "Brain Trust," to work on the economy.

It looks positive so far to us. He looks serious, calm and resolute. He isn't afraid to get advice from people who know more than he does. He is talking realistically about the nature of the problem but also is always optimistic, like Ronald Reagan was.

In the deepest hours of war and depression, FDR urged Americans not to fear. "Fear Nothing But Fear Itself," he said over and over in his characteristically optimistic way.

Barack Obama has been saying the same thing in his own way for two years during the long Presidential campaign -- just using different words: "Yes We Can." He offers optimism and hope for a better tomorrow, which is why he was elected in the main.

Like Ronald Reagan said often: "Hope and optimism are enduring American traits." Neither are a substitute for a good, well executed plan. But without hope and optimism it's hard to come up with such a plan or policy and get the American people to make it work. But of course..."Yes We Can."