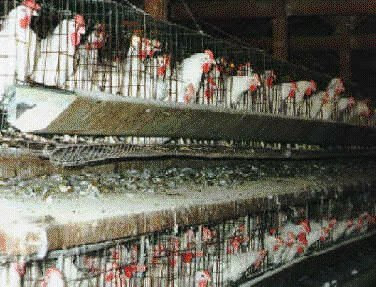 Small or battery hen cages like those pictured above will be outlawed in California beginning in 2015 under the just-passed Proposition 2 ballot measure.

Yesterday we reported in this original story, "California Voters Pass Ballot Measure to Eliminate Battery-Style Cages For Egg-Laying Hens By A 26% Margin; Small Cages to Be Eliminated in 2015," that on Tuesday California voters approved Proposition 2, the "Standards for Confining Farm Animals" act, which will require the state's egg producers to house egg-laying hens in enclosures that allow the birds to to lie down, stand up, extend their limbs and turn around, beginning in 2015.

We also pointed out in yesterday's piece California's egg producers weren't taking this new, voter-approved law lying down. Rather, that they would likely challenge the new law in one form or another, including possibly taking it to court.

While the industry hasn't filed a lawsuit or attempted to obtain an injunction against Proposition 2 yet (it is only one day after the full election results are in after all), which passed by a 63% (approved) -to- 37% (against) margin by California voters, the Modesto (California) Bee newspaper is reporting in this morning's edition the state's egg producers are planning to seek clarification, perhaps by a judge or state regulators, on the "actual" language of the new law.

The industry says it will seek this clarification (it says the law's language on what type of enclosures are required is vague) on this language before deciding how to react to the new law, which will outlaw small or battery-style hen cages in 2015.

Jill Benson, vice president of Modesto, California-based J.S. West & Cos., which is one of the state's largest egg producers, says options in terms of reacting to the new law include complying with the measure, if it is interpreted favorable (by the industry one assumes), or moving the small-cage egg operations to other U.S. states or even countries.

In our piece yesterday we also suggested the Humane Society of the Unites States, which was the chief backer of Proposition 2 in California, would use the success of the ballot measure's wide margin of victory in the Golden State as a springboard to attempt to get similar laws passed in other states. A spokesperson for the Humane Society of the United States says in the Modesto Bee story (published below) the group plans on doing just that.

Stanislaus County, where Modesto is located, and next door Merced County, are the top two egg producing counties in California. California is the number five egg producing state in the U.S.

Below is the story from this morning's Modesto Bee:

California egg producers lost Tuesday's battle over Proposition 2, which bans small cages for laying hens, but they are not done yet.

The measure's language is unclear about just what enclosures will be allowed as of 2015, when it takes effect, said Jill Benson, vice president of J.S. West & Cos. of Modesto.

She said the industry will seek clarification of the wording, possibly by a judge or state regulators, before deciding how to react.

The options include complying with the measure, if it is interpreted favorably, or moving the small-cage operations to other states or countries, she said.

"We as a company and as an industry still have a lot of questions," said Benson, whose business produces about 1.2 million eggs a day. "It's a very vaguely worded and poorly conceived initiative."

The measure took aim at standard industry cages that allow as little as 67 square inches of floor space per hen, less than a sheet of letter paper. Each cage typically has a half-dozen hens.

Proposition 2 requires that hens have enough space to stand up, turn around and flap their
wings without touching each other or the cage walls.

Egg industry leaders take this to mean that all the hens in a cage must have enough room to move freely at once, meaning about 5 square feet would be needed per bird.

The measure's sponsors, led by the Humane Society of the United States, say the wording merely requires that some of the hens be able to move freely at one time.

The measure drew support from 63.2 percent of the voters.

"Together, we fought for the humane treatment of animals, and we won," Wayne Pacelle, president and chief executive officer of the Humane Society, said in a news release. "We are changing the lives of so many animals, and we have made history."

She said the Humane Society will seek similar bans in other states, preferably through legislation rather than ballot measures, but is not looking at other efforts involving California farm animals.

Proposition 2 failed to win a majority in the Northern San Joaquin Valley, which accounted for nearly 60 percent of the state's egg production last year.

They also say eggs from alternative systems, used in less than 10 percent of production, are too expensive for most consumers because of the extra costs for housing and labor.

"To retool an aging industry in this economy is really challenging," said Rich Matteis, administrator of the California Farm Bureau Federation. "People don't have a lot of money to make investments."
Posted by Fresh & Easy Buzz at 8:29 AM