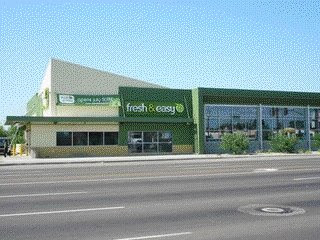 Tesco's Fresh & Easy Neighborhood Market USA will celebrate a numerical store opening milestone tomorrow morning when it opens store number 100 in the Southern California city of Fullerton. The new store is located at Orangethorpe Avenue and Euclid Street in the Orange County city. The actual address is: 1207 South Euclid Street.

The first batch of Fresh & Easy stores officially opened last year, in November, 2007, were in Southern California, including in the Orange County city of Anaheim. Therefore, the retailer is coming full-circle about one year later, opening its 100th store in a city, Fullerton, in that same county.

As store opening paces go, 100 stores in roughly one year is a rather remarkable pace -- assuming a food retailer wants to open new stores at such a fast pace, of course. There are pluses and minuses to doing so.

In Tesco's case the pluses outweigh the minuses because as we've written about all year, the company's strategy with the small-format combination grocery and fresh foods convenience-oriented Fresh & Easy chain is what we call "critical mass," opening as many stores (within reason of course) as rapidly as possible in three key market regions -- Southern California, Metropolitan Las Vegas, Nevada and in the Phoenix Arizona Metropolitan region market.

Beginning on December 3 Tesco expands it reach in California to the southern Central Valley city of Bakersfield, where it will open the first two of five thus far planned combination grocery and fresh foods Fresh & Easy markets. From there it is on to the rest of the Central Valley -- Fresno, Modesto, ect. -- up into the Sacramento/Vacaville Metropolitan region and to the San Francisco Bay Area. The first of those stores are set to begin opening early next year.

This leads us to believe the grocery chain will not only open far fewer stores in the Northern California region in 2009 than the thus far 45 Fresh & Easy markets we've indentified for Northern California --and probably even fewer than the 37 of those stores it has confirmed to date -- we also think the stores will start opening at best in the second half of 2009 rather than in the first quarter, which is when Tesco has said the markets will begin opening.

Store count is only part of the game though; often a small part. Performance is the top gun. In that regard the jury remains out on the overall success of Tesco's small-format, convenience-oriented Fresh & Easy food and grocery retailing venture.

Despite that, store number 100 opens in Fullerton, California tomorrow morning.

Additionally, Fresh & Easy CEO Tim Mason has said at least 100 -to- 125 more Fresh & Easy stores are set to open in California, Nevada and Arizona in 2009, although our sources say that number could be reduced considerably by the grocery chain like it has done in the past.

Earlier in the fall Tesco reported a loss of $108 million on sales of just under $400 million for Fresh & Easy for a nine month period. This was the first time Tesco reported sales and income for the start up grocery chain.

The company attributed most of the loss to start up costs. It will be a little more difficult to make that same attribution when Tesco next reports sales and earnings for the chain, which is based in Southern California.

However, since 2009 will be an expansion year as great as 2007-2008 has been, Tesco will continue dumping lots of investment dollars into the fresh foods and grocery retailing venture, which has been the company's plan all along. Therefore, look for it to attribute any similar losses to those efforts as well next time, an attribution which would be justified in part but not in full.

The key metrics we will look for will be same store sales. That's sales at stores open more than a year. Additionally we look forward to seeing what Tesco's reports next for Fresh & Easy in terms of average sales per store per square foot.

For us, earnings/losses will be less important -- unless they are dramatic losses -- because of the rapid expansion and thus investment we described above.

As a result, sales at existing stores, compared to sales at those stores in the last reporting period, is the key we will be looking at and analyzing closely, along with average sales per store per square foot.

There will be a grand opening celebration at 10am tomorrow just like the grocer has held for the opening of its other 99 new stores opened to date. There will be food samplings, a ribbon cutting and brief speech by CEO Tim Mason, some special events, and most likely a group of demonstrators from the United Food & Commercial Workers (UFCW) union in attendance.

And when store number 100 opens tomorrow morning, Tesco will have 49 Fresh & Easy markets in Southern California, 26 stores in the Phoenix, Arizona Metropolitan region, and 25 stores in Metro Las Vegas, Nevada -- with more to come. But perhaps at a slower pace, as we suggested above.
Posted by Fresh & Easy Buzz at 6:03 PM

I was thinking today about Tesco's strategy, and I have to wonder: what's the deal with all the house brand goods? The variety of house brands in the stores has been going up a lot over the past few months, and it can't be cheap for them. I began to wonder that if the grand experiment fails and the stores close, do they plan to turn F&E into a goods brand and sell many of the products in other stores?

Then I remembered this is a grocery company, not a food company, and that if pressed to the wall they'd stop making so many generics and focus on selling more name brand things.

So, what's in it for Tesco to have people buying such a high percentage of F&E product in F&E stores? It can't be cheap to have all these deals with the producers. They don't seem to serve as a low cost leader like many other stores, since I've seen F&E product cost more than the name brand sitting next to it in a few occasions.