More Critical Mass in the Neighborhood: A New Fresh & Easy Grocery Store to 'Sprout' In the Southern California Central Coast City of Lompoc 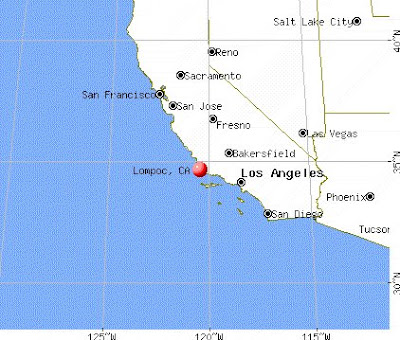 Tesco's Fresh & Easy Neighborhood Market has purchased a vacant commercial retail building at 1009 North H Street, near the corner of North Avenue, in the coastal Santa Barbara County city of Lompoc (pronounced Lahm' poke) in Southern California, according to a report in that city's local daily newspaper, The Lompoc Record.

In the news story, Tesco Fresh & Easy spokesman Brendan Wonnacott, confirmed to staff writer Glen Wallace the retailer has acquired the building. However, Wonnacott said it was too early to offer a date as to when the store would be ready to open.
The fact Tesco's Fresh & Easy plans to locate the store in Lompoc, in Santa Barbara County, is important because it's a geographic expansion of sorts for the grocery chain in Southern California.
To date, the retailer's numerous small-format, combination basic grocery and fresh/specialty foods' grocery stores in the region are located in Los Angeles, Orange and nearby counties; the Inland Empire desert region counties of San Bernardino and Riverside; and south towards and in San Diego County. 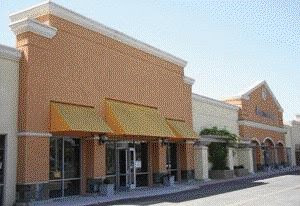 The building in the foreground above (with the three window awnings), which is located in a shopping center, will become a Fresh & Easy Neighborhood Market grocery store in Lompoc, California. (Photo Courtesy: The Lompoc Record.)

Lompoc and Santa Barbara County are more farther north coastal regions in Southern California than where the Fresh & Easy grocery stores currently have been opened. In addition to Lompoc, the major cities in the county include Santa Barbara, Ventura, Oxnard and a few others.

The area isn't that far from Los Angeles or Orange County for example, but it is a different regional geographical and demographic part of the Southern California food and grocery market, which is another reason, along with geography, it signals an extension of Fresh & Easy's "Ring the Bay" Southern California "critical mass" store location strategy as we refer to the scheme.

However, doing so is all part of what we've described as Tesco's "critical mass" strategy of locating numerous Fresh & Easy grocery stores (eventually having them just 1.5 to 2 miles apart) in key market regions, which include Southern California, the Phoenix, Arizona/East Valley Metropolitan region, Metro Las Vegas, Nevada, the San Francisco Bay Area, Metro Bakersfield in Central California, and the Sacramento region in Northern California, as well as future regions in the Western USA and elsewhere in the country.

The Santa Barbara County-Lompoc move also is key in that it signals just the beginning of new store openings in this part of Southern California. Remember the "critical mass" strategy. One store in this region means more on the way.

Lompoc is a city of about 50,000 residents. Demographically, the city's population is about 60% white, 30% Hispanic, 6% African American and 4% Asian. It's a middle-income, primarily working class city, although numerous affluent residents live in Lompoc and nearby in Santa Barbara County.

However, because of its desirable coastal location, the cost of housing in Lompoc has soared over the years, making it difficult for most of the city's residents to afford to buy new homes in the city and surrounding area.

Those residents who've owned homes in the area for 10 or more years though have seen the value of their houses skyrocket, even with the current housing bust in California and elsewhere in the U.S.

According to The Lompoc Record news story, the city of 50,000 currently has four full-sized supermarkets in it. That's fairly moderate for a city that size based on Southern California standards. We wouldn't call it under-stored, but it should have plenty of room for a small-format Fresh & Easy basic grocery and fresh foods format convenience-oriented market.

Resident and community groups in Lompoc have been trying, like numerous other cities are in the U.S., to lure a Trader Joe's specialty grocery store to their city.

In 2003, a group of residents launched a petition drive to bring a branch of the specialty grocer y chain to Lompoc, but it failed. They've continued to try though. However, after another lobbying effort last year, Trader Joe's told the Lompoc group it had no plans to open a store in their town in the foreseeable future.

This is obviously a big plus for Fresh & Easy in that many of the city's residents are primed for a Trader Joe's-like small-format grocery store, which Tesco's Fresh & Easy is in part. We often refer to the Fresh & Easy format as a Mini-Costco meets a Trader Joe's because the stores are one-part limited assortment, basic discount everyday grocery store and one part fresh, specialty and natural foods' store.

The Lompoc example, with its consumer demand for a Trader Joe's and an opportunity for Tesco's Fresh & Easy to capitalize on that demand, also points up the importance of our frequent argument that the grocer needs to localize its stores more and better.

For example, since there's such a huge demand for a Trader Joe's in Lompoc, Fresh & Easy could customize its store in the city with more specialty, gourmet, ethnic, natural and organic food and grocery products than it normally carries in the grocery markets, while still keeping its basic format. We call this localizing a store and its product mix on top of its basic format.

In other words, emphasis this particular store's Trader Joe's side a bit more than its Mini-Costco side. In other cities and neighborhoods, the Mini-Costco side might need to be emphasised more, for example, along with other localization and customization schemes.

What we do know is Fresh & Easy has already started doing some work on the Lompoc empty store building it's acquired, which is pictured at the top of this piece.

It shouldn't take the retailer too long to renovate it into a Fresh & Easy grocery store as to date its converted almost all of the 61 stores it has open from empty buildings into 10,000 -to- 13,000 square foot Fresh & Easy Neighborhood Market grocery stores in a relatively short per-store time span.

Editor's Note: The map we tailored above shows Lompoc, California in relation to other areas where Fresh & Easy stores are: Southern California, the Phoenix, Arizona Metropolitan area and the Las Vegas, Nevada Metro region, along with future Fresh & Easy locations in Bakersfield (Central Valley) the San Francisco Bay Area and Sacramento in Northern California.

The map should give you a good visual idea of what we mean when we say Tesco's retail store location strategy in the Western USA is to build a "critical mass" of Fresh & Easy grocery stores in key regions so as to be a neighborhood retail institution similar to how Rite-Aid and Walgreens are in the drug store sector and Starbucks is in the coffee retailing and cafe sector.

I am so happy about this! I definetly want to work there and i'll keep trying until I do! And I'll probably shop there ALOT too!

You're right on about Lompoc. It's kind of an oddity in that it has a mostly working class indset but has a very progressive streak that will welcome this store format. We shop in F&E in LA COunty and are moving north. Seeing the sign about your new store clinched the deal for us. We'll be the first ones in line!

I've been watching the "COMING SOON" sign that seems to be permanently affixed to the front of the store...Is it truly going to open someday? It's June 2009 now!