Consumer Briefing: The New, Frugal and Near-Broke American Consumer is Staying Home For the Holidays 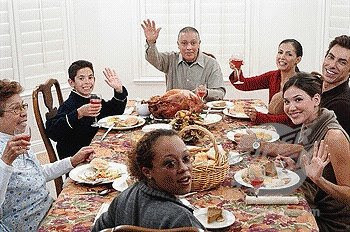 What Others Are Saying: From: Natural~Specialty Foods Memo

It looks like American consumers will be staying 'home for the holidays' in much higher numbers this Thanksgiving and Christmas than in the past. That shouldn't be a surprise really. After all, nearly all of us are broke.

Based on a number of surveys and other sources of information, it looks like many more consumers are staying home for Thanksgiving this year compared to last, and slightly more will be staying home for Christmas.

It appears many who had planned to go away to visit family for both Thanksgiving and Christmas can only afford to do so for one of the holidays. Therefore, most are opting to do so for Christmas (and those plans could change for many) and stay home and cook dinner for Thanksgiving at home. Many can't afford to leave home for either holiday -- and in fact are hoping to be able to run the furnace to keep them warm while enjoying their holiday dinner at home.

That's bad news for restaurants, the airline companies, gasoline stations, motels/hotels and other businesses that cater to holiday travelers.

However, it is good news for food and grocery retailers. The stay at home Thanksgiving 2008 trend means more people will be shopping at retail grocery stores because they are preparing dinner for family, relatives and friends at home.

Additionally, since the Thanksgiving weekend is a four-day holiday (Thursday-through-Sunday) for most, not going away means consumers will need to stock up on everyday and post-holiday provisions for the long weekend at home. After all, leftover turkey and trimmings is fine the next day. But by Saturday even the super-frugal need something else. That's more good news for grocers and those who supply stores.

The food and grocery industry Blog, Natural~Specialty Foods Memo, has a current piece about this staying 'home for the holidays' trend. You can read the story here: "Consumer Behavior Memo: 'Uber-Cocooning' -- Many American Consumers Staying 'Home For the Holidays' Out of Forced Economic Necessity."

Of course, just because millions more American consumers are staying home for Thanksgiving and Christmas this year (many are still traveling of course; just far fewer) instead of going away, and therefore will be buying more food and groceries at the grocery store, that doesn't mean they plan on splurging and spending the equivilent of say four airline tickets from home in Southern California to mom and dad's (and the grandparent's for the two kids) house in Texas, a trip they might have planned earlier this year but canceled after the financial crisis and recession hit full-blown a few months ago.

Instead, we're seeing a major trend towards frugality among American consumers, which we've been writing about in Fresh & Easy Buzz regularly. Shoppers are trading down from higher-end supermarkets to discounters, using more manufacturers' and retailer coupons (manufacturer coupon use is up 30% since February of this year), eliminating lots of their purchases of organic, specialty, premium and prepared foods, and going to the grocery store less often, buying fewer items when they do.

Natural~Specialty Foods Memo has a story highlighting and discussing this new phenomenon, the new, frugal American consumer. It's a trend every retail grocer must pay attention to, and market and merchandise to, in order to survive in this current recessionary economy. It's an economy that's going to get far worse. For example, most analysts are suggesting the current 6.5% U.S. unemployment rate should hit 8% by the first of next year, and could even go as high as 10% by mid-2009.

Even high-income shoppers are cutting back dramatically, according to sales figures at more upscale stores as well as from survey data.

While the retail food and grocery industry in the main isn't being hurt to anywhere near the degree other format, such as department store and specialty general merchandise retailers are, there are players in the grocery retail sector that are suffering considerably. Those doing well are the discounters -- Wal-Mart, BJ's Wholesale Club, Costco, as well as supermarket chains such as Safeway Stores, Inc. and others --that are lowering prices (and costs), continuing to fine tune their value propositions, and communicating those propositions to shoppers in a variety of ways (different media and in-store) on a consistant and regular basis.

We believe the recession will last for all of 2009, getting worse and deeper before the economy begins to improve, even with the $500-$700 billion stimulus package President-elect Barack Obama is asking Congress to have passed and ready for him to sign when he takes office the last week of January, 2009.

Every retailer in the U.S. -- from Whole Foods Market, Dean & DeLuca and every upscale chain and independent, to conventional retailers and even discount format operaters -- must have a solid value proposition unique and customized to their particular retail formats and operations.

This value proposition needs to be clean, consise, clear and comprehensive.

It needs to be a major part (if not the major part) of any grocery retailer's mission from today on. It should have been since early this year. But it isn't too late. But it is getting to be too late.

In this economy, value is the key variable across all consumer classes and income levels. Just ask New York City's famous Saks Fifth Avenue high-end department store chain. Last week the upscale retailer, which has done fine during the last two U.S. recessions, discounted most of its designer clothing, shoes and other items (Gucci, Prada, ect.) by 40% -to- 60% -- and it still isn't selling, even to those high income consumers who comprise Saks' customer base.

While consumers have to by groceries and eat, but not buy Gucci or Prada, they don't have to shop at any given supermarket. They are demonstrating this fact by trading down; there's a flight to value when it comes to food and grocery stores. Those who recognize this, devise the value proposition we describe and then communicate it well, like Wal-Mart is doing on all counts right now, will not only survive the next year or more, but also will thrive.

>Retail Memo: What's Next For U.S. Retailers if the Economy Picks Up in 2010?

Thanks for this useful article.
Thanksgiving will be for sure celebrated at home and that's good for Fresh and Easy, which is already promoting some ready-to-serve meal components !

We hope get good reports uploaded as well !

You are welcome anonymous (researchfarm.co.uk)...

Don't you think Fresh & Easy should have taken advantage of the 'Thanksgiving at home' and 'frugal consumer' trends this year though and advertised a real hot deal on aat least one fresh and one frozen turkey, like all of its competitors are doing, at a minimum?

For example, how about a free bird with any order of $100 or more?

A frozen turkey for 49-69 cents a lb. A fresh bird for cheap with a minumum $25 purchase? Safeway has 12-16 lbs birds for 38 cents a pound with a minimum $25 purchase, for example. It's a 'get them in the store' door buster. Also a way to motivate incremental sales.

Keep us informed on your Web site.