California: The State of the State and its Economy; Governor to Propose Tax Increases and Massive Spending Cuts to Fix $11 Billion Budget Shortfall 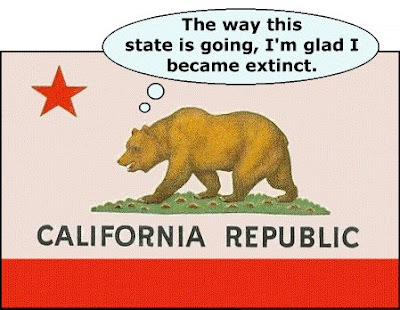 Just two days after the 2008 election, California Governor Arnold Schwarzenegger today is calling for a special legislative session to fix the Golden State's (which is looking a little tarnished economically) estimated and growing $11.2 billion budget shortfall.

Among the ways the Governor is proposing to fix the multi-billion dollar budget shortfall include rasing taxes, along with cutting spending in the areas of health care and education, which are two areas which comprise a significant percentage of the state's budget, while also being two of the most vital services California provides to its taxpayers.

It's particularly ironic the former movie star turned Governor is proposing raising taxes of any kind. Scwarzenegger promised California voters he would not raise taxes at all, both in his first run for Governor and again during his recent campaign, when he was elected for his second term.

Additionally, just a few days before the Tuesday election, the Governor appeared in New Mexico at a campaign rally with Republican candidate John McCain, who Scwarzenegger supported in his failed camapign to be President of the United States. During the rally the Governor of the most-populus state in the nation voiced strong support for McCain's proposed tax cut package, which the candidate said he would push through if elected President.

During the rally, Governor Scwarzenegger also accused now President-elect Barack Obama, who his wife, California First Lady and Kennedy family member Maria Shriver supported for President, of claiming he would cut taxes for 95% of Americans, those making less than $250,000 annually, but really having plans to raise taxes if elected, which he said would be a very bad idea for any new President to do.

Now, however, just a few days later, it appears California's poor economic condition has created the circumstances in which the Governor feels it's ok for him to flip-flop on both his campaign promises and recent Presidential campaign trail comments and propose tax increases, even though he has said numerous times in recent months the worse thing government can do in an economic recession, which California is in, is to raise taxes.

Tesco's Fresh & Easy Neighborhood Market is headquartered in (Southern) California, where the majority of its current 97 grocery and fresh foods markets are located, along with its 850,000 square feet distribution center. About half the Fresh & Easy stores are in Southern California, with the other half been in Nevada and Arizona.

The grocery chain, owned and operated by United Kingdom-based Tesco plc., plans to open as many as 100 new stores in California next year, including moving into new regions of the Golden State including the Central Valley, the Sacramento/Vacaville Metropolitan region and the San Francisco Bay Area, along with opening more stores in its Southern California home base, as well as in Nevada and Arizona.

We believe the Republican Governor is going to be in for a huge fight, not just from legislators in his own party, most of whom have said they oppose raising taxes of any kind, but also from many Democrats, when it comes to raising taxes of any type -- even esoteric ones like creating an oil extraction tax which is one of his ideas -- in this sour economic climate.

We also believe he faces an uphill battle if he expects to make any significant cuts in health care and education, two areas Californians are reluctant to see slashed any further than they already have been.

In terms of tax increases on California businesses, the state's unemployment rate already is at 7.7%, and most analysts expect it to top 8% when its next reported.

Additionally, numerous California companies and small businesses are in the process of firing workers because of the recession and the current financial and credit crisis. Hitting business with any new taxes could result in even more job loses, sending the number of unemployed workers in the state even farther over the cliff than is already expected.

The fact remains though, despite the Governor's campaign promises and political stumping against tax increases, that California has a huge and growing budget shortfall.

Basically all that can be done in the short term to fix this fact is to either cut expenses or raise revenues -- or a combination of the two.

The fine line that must be walked in doing so is to not have those cuts and tax increases be such that they make a bad state economy even worse, and that they don't seriously injure vital programs like education and health care to the point in which they seriously harm the present and future of the state and its residents.

No easy task that is. Heck, it's not even easy to do in the movies.