U.S. Farm & Food Policy Under President Obama: What Will Obama Do as America's 'Farmer in Chief?' Writer Michael Pollan Offers Some Policy Ideas 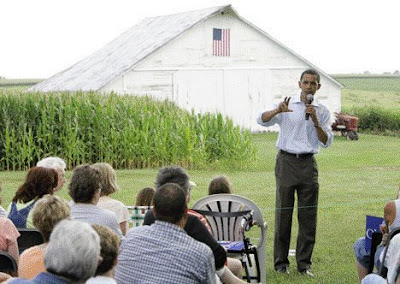 In 76 days President-elect Barack Obama will be sworn in as the next President of the United States.

As President he will face a host of serious issues, ranging from a financial crisis and recession at home, to war abroad.

The next U.S. President also will face an America where over the last year the price of food at the supermarket has soared by double-digits, which taken with the other economic problems the country is experiencing is seriously affecting consumers, along with farmers, agribusiness and the food and grocery industry.

President-elect Obama also will face a global food crisis in which far more people throughout the world, especially in the third world, are hungrier than was the case eight years ago. And as the leader of the world's leading economy he will be expected to play a major role as President in solving this crisis.

The food and grocery industry Blog Natural~Specialty Foods Memo published the piece reproduced below yesterday (before the Presidential election results were in) about a new farm and food policy proposed by popular writer and food policy advocate Michael Pollan.

The writer addressed his policy proposal via an article in the New York Times to the next U.S. "Farmer in Chief." Since Barack Obama will assume that title, at least along with the title of President and Commander in Chief, in late January, 2009 -- and since according to the piece now President-elect Obama has read and commented on some of Pollan's policy ideas -- it's possible we could see a partial or major shift in America's agricultural and food policy under an Obama Administration. Or we could at least see some increased attention and focus paid to it, which the Bush administration really hasn't done in its eight years in office.

Below is the post from yesterday's Natural~Specialty Foods Memo:

As we write this piece, America's voters are either at the polls, getting ready to vote, or have already voted, since about 30% voted early in the 30 U.S. states that permit early voting.

And as America prepares to learn who the nation's next President will be, the country faces a host of serious challenges at home and abroad. These challenges include: the worst financial crisis since the great depression; an economic recession; engagement in two wars; record federal government budget red ink; growing unemployment; a broken health care system; soaring food prices; and a host of other problems and challenges.

Whichever candidate is elected -- Democrat Barack Obama or Republican John McCain -- he will face more domestic and global challenges than any other President in modern history has upon taking office.

The most pressing issue as evidenced by polls of the American people is the economy. Consumer confidence is at historic lows, the credit markets remain frozen despite an injection of $700 billion of taxpayer money, people fear their jobs might be gone tomorrow, and to borrow a word from former President Jimmy Carter, economic malaise is beginning to set in across America.

The economy has been the primary issue during the last 4-5 weeks of the Presidential campaign, with little room really for discussion of anything else. This is probably as it should be considering how the economy is the master of all else -- and how deep of a hole it is in.

However, among the other serious issues facing the next President is food and agricultural policy in America, which is something both Barack Obama and John McCain have talked very little about, if at all, during the long Presidential campaign, which comes to an end today, election day 2008.

Michael Pollan, the University of California at Berkeley journalism professor, author ("The Omnivore's Dilemma" and other best selling books about food and agriculture food policy) and national advocate for a new approach to food and farm policy, is a person who has given much thought to the lack of discussion and debate in this election year regarding agricultural and food policy.

You can read Pollan's "An Open Letter to the Next President" article from the Times' at this link: Michael Pollan Proposes A "Sun-Food" Agenda In Open Letter To Next U.S. President. Pollan calls this agenda for the next President, who we should soon learn is going to be, the "Sun Food" agenda, as the article about the next "Farmer In Chief" lays out.

It appears that although he hasn't been talking much during the campaign about food policy, one candidate and the potential "farmer in chief", Barack Obama, did pay attention to Michael Pollan's article and "Sun Food" agenda.

According to Pollan, the Obama staffer asked him to distill the article into a one or two page summary so the campaign staff member could present it to Obama to read and review. Pollan said no, telling the staffer if he could have presented the agenda for the next "farmer in chief" in a page or two he wouldn't have bothered to write an 8,000 word article about it. After all, the article is online -- and isn't that what staffers are for? To write summaries of various articles and position papers for Presidential candidates?

Despite Pollan's decision not to summarize his 8,000 word article, which turned out to be the smart thing to do, it appears Barack Obama read the author's entire New York Times' article himself.

In an October 23, 2008 interview with Time magazine writer and columnist Joe Klein, Obama refers to the article, explaining how Pollan's ideas fit into his concept of a new energy economy. Obama has said if elected President he would invest at least $15 billion a year for the next few years, creating an Apollo-type energy program focusing on alternative and renewable energy such as solar, wind, geothermal and other forms, as well as investing in new automotive technologies and conservation and related "green" programs, creating millions of jobs in the process.

Below is a summary of what Obama told Joe Klein in the interview regarding his energy policy, the new energy economy he is proposing, and how Pollan's "Sun Food" agenda for the next President fits into it:

"There is no better potential driver that pervades all aspects of our economy than a new energy economy. I was just reading an article in the New York Times by Michael Pollen about food and the fact that our entire agricultural system is built on cheap oil. As a consequence, our agriculture sector actually is contributing more greenhouse gases than our transportation sector. And in the mean time, it's creating monocultures that are vulnerable to national security threats, are now vulnerable to sky-high food prices or crashes in food prices, huge swings in commodity prices, and are partly responsible for the explosion in our healthcare costs because they're contributing to type 2 diabetes, stroke and heart disease, obesity, all the things that are driving our huge explosion in healthcare costs. That's just one sector of the economy. You think about the same thing is true on transportation. The same thing is true on how we construct our buildings. The same is true across the board."

In our analysis and opinion there's a near 100% synergy between energy policy and food and agricultural policy in the U.S.

For example, one of the primary drivers of the soaring price of food over the last year is the rapidly-rising price of oil and the resulting sky-high price of fuel. The fact the price of oil has dropped nearly 50% over the last few months is only a short-term band-aid fix. It will go back up again, especially if the U.S. fails to embark on a massive program designed to achieve energy independence like Barack Obama is proposing.

These high fuel prices, and the uncertainty they have created, are being felt throughout the entire food supply chain, from the farm to the supermarket, along with in American consumers' pockets and what's left of their bank accounts.

One thing we do suggest to Senator Obama and team if he is elected today is to remember America's agricultural and food industry is arguably the nation's most important and most responsible.

For example, unlike the financial services and auto industries, and probably a few others soon, America's agricultural and food industries aren't asking the federal government to bail them out with taxpayer dollars, even though a number of companies are experiencing tough times. Like the rest of America's businesses and individuals they are helping to pay for bailing out these industries.

Additionally, America's agribusiness companies and farmers, as well as its food and grocery manufacturers, distributors and retailers -- all vital national enterprises -- haven't behaved in a way that's found them financially leveraged to the hilt. Rather, most of these companies and family farmers operate, grow and behave in financially prudent ways. Compare this to many of America's big banks and financial institutions, for example.

Therefore, we encourage what in just a few hours could very well be the new U.S. Presidential Administration to make sure it does all it can to work with and protect America's farmers, agricultural and food and grocery industry businesses during any new energy-agricultural policy shift. This is a policy shift, a focus on new energy sources, we agree with.

And if a new agricultural and food policy is a part of this policy shift, which we agree with in the main except for some particular details, then America's agricultural and food industries, which have in the main been ethically good players, employers and agents for the consumer in the economy, need to be considered, listened to and involved in developing this new policy.

Meanwhile, if Barack Obama is elected President today, it will be refreshing to have an American President who actually reads the newspapers. Since his first term in office, President George W. Bush has proudly said he doesn't read the papers. Perhaps that's how he missed the fact financial crisis was on the way? Or that Hurricane Katrina could be devastating? Or that OPEC was cutting oil production so it could jack up the price of oil?

[Photo Credit: the photograph of Barack Obama at the top of this piece is by Charlie Neibergal. Courtesy: Associated Press.]
Posted by Fresh & Easy Buzz at 3:17 PM