It's Nearly All Over But For the Voting; Americans to Elect A New President, National and Local Leaders Tomorrow 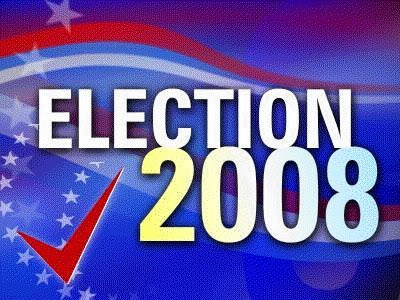 After two years of campaigning -- first through the primary campaigns against members of their own respective political parties and then one-on-one against each other in the general election -- Democratic candidate for President Barack Obama and Republican candidate John McCain are completing the campaign home stretch this afternoon and this evening.

After tonight and a couple brief, early morning rallies for the Presidential candidates, both United States Senators, tomorrow, it will be all over -- except for the voting -- which is the final and only important poll of a long 2008 U.S. Presidential campaign full of polls, predictions and upsets. Neither McCain or Obama were early or even mid-term favorites to win their party nominations, for example.

Speaking of polls, the Realclearpolitics.com Web site poll of polls, which is an average of every Presidential and Congressional poll being conducted, shows Democratic candidate Barack Obama winning 278 electoral votes to John McCain's 132, with 128 toss up electoral votes. In order to win the Presidency a candidate needs to reach over 270 electoral votes.

Electoral votes are the real measure of winning. A candidate can win the popular vote (the majority of voters voting for him or her) but still lose the election because the other candidate won the Electoral College.

In terms of horse race poll numbers, Realclearpolitics.com's (RCP) poll of polls shows Obama leading McCain nationally by +7.3 percentage points, 51.6% for Obama vs. 44.3% for McCain, as of 6pm eastern time today. RCP's poll of polls also shows the Democrats winning nationwide in seats for the U.S. House of Represenatives (the House and the Senate) by +9.0%, 47.6% for the Democrats vs 38.6% for the GOP.

For the first time in modern Presidential election history a Democrat, Senator Barack Obama, also has either a lead or is virtually tied with Senator McCain in a number of traditionally Republican or "red" states. These states include Florida, Ohio, Nevada, New Mexico, Colorado, Indiana, North Dakota, Georgia and even John McCain's home state of Arizona. These battleground states will determine who is elected President tomorrow.

In California, a state that traditionally votes Democrat, and which has the highest number of electoral college votes, Obama is leading by over 20 percentage points. Political observers in the Golden State are predicting the Democratic party candidate will win the state by the largest margin in recent Presidential election history.

There's only one traditionally Democratic or "blue" state that currently appears to be a toss up, according to the polls as of 6pm eastern time this evening. That state is Pennsylvania.

Obama currently has a 4 -to- 7 point lead in the state, depending on the poll. However, his lead has been tightening over the last week, and Senator McCain and his Vice Presidential running mate, Alaska Governor Sarah Palin, have both been spending lots of time in the state in the last week. So to have Senator Obama, his running mate Joe Biden, who was born and raised in Scranton Pennsylvania, and is often called the third Pennsylvania Senator because his state of Delaware borders Pennsylvania and shares a major media market.

Senator Hillary Clinton, who proved popular among working class Pennsylvania voters winning the Democratic primary over Barack Obama, has been stumping the state aggressively for Obama, especially in the areas where she did well and has proved popular with middle class voters.

Senator McCain is getting a strong assist in Pennsylvania from former Governor Tom Ridge, who remains very popular in the state. Ridge, who served as George W. Bush's first Homeland Security Director after the position was created following the September 11, 2001 terrorist attacks in the U.S., has been campaigning with Senator McCain as well as on his own throughout his home state.

Despite what all the polls are saying less than 24 hours before voting day, U.S. Presidential candidates ahead in the polls just days before an election have lost before. You only have to go back to 2004 when Democrat John Kerry was leading George W. Bush by three to five percentage points nationally just a couple days before election day for evidence of that fact.

And of course, the most famous poor Presidential poll prediction occurred in the 1948 race between Republican Thomas Dewey and Democrat Harry Truman. The pundits and press were so sure Dewey would defeat Truman in that election that the papers went to press on election day, calling the race for Republican Dewey. The next mornings papers had front page headlines reading: "Dewey Defeats Truman."

But Harry Truman won, and the press hasn't lived down that gaff to this day. Of course polling is much more sophisticated today than it was in 1948. However, as we mentioned earlier -- such polls are often wrong.

However, Obama has something Kerry didn't, which is that he is leading, tied or just one or two percentage points behind in the numerous traditionally Republican red states we mentioned above. In 2004 Senator Kerry did not win one traditionally red or Republican state.

But, it is the election day poll, held tomorrow, Tuesday, November 4, that counts.

About 25% -to- 30% of American voters are said to have already voted in early elections though, which offers a window into tomorrow's election results. Thirty U.S. states hold early elections which begin about two weeks before election day.

Thus far the results of the early elections are showing Senator Obama with a slight advantage. This isn't surprising because a part of the Obama campaign's well executed strategy has been to sign up millions of new voters and then get them to the polls early in those states where early voting is available.

But even though about 25% -to- 30% of Americans are said to have already voted in the early elections, tomorrow will still be a packed day at the polls, by all estimates.

Millions of new voters, including historically high percentages of young people, African Americans, Hispanics and poor whites, have registered to vote this year. Analysts are going as far as to suggest there could be a 75% turnout this year.

In California some officials are suggesting it could be 80%, which would be the highest turnout in the state's history. If there is a 65% -to- 75% voter turnout in tomorrow's election it would be at least 15 percentage points or more higher than normal for U.S. Presidential elections, where 55 -to- 60% has been considered a good turnout in recent times.

Much is at stake in tomorrow's election. The nation is in the midst of the worst financial crisis since the great depression, is by all accounts in an economic recession, and is engaged in two wars abroad, in Iraq and Afghanistan. Add to that record federal budget red ink, growing unemployment and the worse consumer confidence in the U.S. economy in modern history, and you can get a idea of what faces whichever man is elected tomorrow.

Tomorrow's election also is an historical one. Should Barack Obama win he would be the first black man -- the son of an African father from Kenya and a white mother from Kansas -- to be elected President of the United States of America. History would then read U.S. Presidents 1 through 43 as white, and number 44, Barack Obama, as the first black President.

The McCain-Palin ticket also will make history if elected tomorrow. Alaska Governor Sarah Palin would be the first woman ever to serve as Vice President in American history.

Democratic candidate Walter Mondale chose the first woman, Geraldine Ferraro, as his Vice Presidential running mate in 1984. But the Democratic Mondale-Ferraro ticket was defeated by a substantial margin in that Presidential election by Ronald Reagan and his Vice Presidential running mate, George Herbert Walker Bush, the father of the current President, George W. Bush, who hasn't been seen on the campaign trail much if at all for John McCain because the current Republican President has an approval rating by the American people of about 26%, which is lower than Richard Nixon's approval rating at the height of the Watergate scandal.

The Real Clear Politics Web site has numerous links to up-to the-minute polls and other data about tomorrow's Presidential and Congressional election.

We also shouldn't forget to add that across the U.S. tomorrow voters will vote for statewide candidates, ballot initiatives and local candidates such as mayors and city council members as well as the national candidates. In many ways these local races are just as important as the national races because they affect voters right where they live, in their respective states and cities.

You can view the Real Clear Politics Web site here.

As we publish this piece on Monday, Senators Obama and McCain, and their running mates, are finishing up the last of their late afternoon and evening campaign events across America. Both Obama and McCain have Tuesday morning events planned. But in the tradition of American Presidential campaigns, once those events are finished so to will be the official public campaigning for both candidates.

Beginning tonight and first thing tomorrow morning it's all about getting out the vote; getting supporters and potential supporters to the polls. That's called the ground game. And just like in football, a good ground game can at the last minute make the difference between winning and losing.

Senator Obama will end his day at home in Chicago Illinois, holding an election night rally outdoors in the city's Grant Park. Chicago Mayor Richard Daly is predicting there will be one million people at the event tomorrow night.

Senator McCain will end his campaign day tomorrow in his home state of Arizona, holding a more traditional election night event in a ballroom at the Arizona Biltmore Hotel in Phoenix.

If the predictions hold true, it will be a pleasant evening tomorrow, at least weather-wise, in both cities. We suspect though despite what the weather is tomorrow night in either city, the better of the two nights will go to the winner, either Obama in Chicago or McCain in Arizona. We further suspect each would gladly give up an evening of clear skies and balmy weather for a night of snow and and sleet if it meant winning.

But weather forecasting, just like Presidential election polling, is often as much of an art as it is a science. And like pollsters, weather forecasters are always revising their predictions.

Therefore, tomorrow night's weather, just like the results of tomorrow's election -- which if close might not be determined by even late Tuesday night (after all it took 36 days, including a court battle, after the Bush vs Gore 2000 election to name a winner) -- will have to wait until tomorrow, when we can see the results for ourselves.
Posted by Fresh & Easy Buzz at 3:22 PM