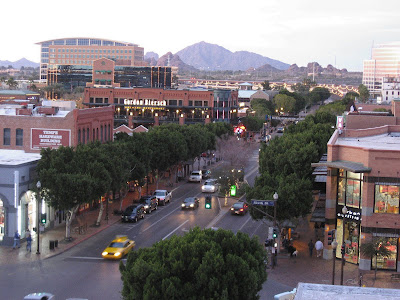 On August 11, 2008 we wrote this story, "Arizona Region Market Report: Which Food Retailer Will Seize the Opportunity Offered by the Lack of a Grocery Store in Downtown Tempe, Arizona?" In the piece, which you can read completely by clicking on the title above, we explored the fact downtown Tempe, Arizona (pictured above) is underserved by supermarkets that offer basic groceries and fresh foods at affordable prices despite having gone through a resurgence in recent times. That resurgence is ongoing today.

The city of Tempe, Arizona, which is located in the Phoenix Metropolitan region, has been trying to lure a grocer to open a store in the city's downtown for a number of years. Downtown Tempe has few supermarkets that offer a selection of basic groceries and fresh foods at affordable prices, making it what's commonly referred to as an urban "food desert."

It appears our piece written a little over three months ago was rather prescient. Well, close to it. Just one mile away from being very prescient in fact.

According to the city of Tempe, it looks like Tesco's Fresh & Easy Neighborhood Market has plans to open one of its small-format, convenience-oriented grocery and fresh foods markets close to the city's downtown core, about one mile away.

The grocery chain plans to open a Fresh & Easy store in what soon will be a vacant building at the southeast corner of Mill Avenue and Broadway Road in the city. The location is right on the outskirts of downtown Tempe.

Tesco's Fresh & Easy has applied for a beer and wine off sale liquor license at the location. Additionally, the retailer plans to go before the Tempe City Council on Thursday night with a proposal to remodel the soon to be vacant building, according to the city of Tempe.

The off sale beer and wine permit application shows the proposed Fresh & Easy market's address as 83 E. Broadway Road. That building is currently occupied by a Walgreens drug store. But a spokesperson for the city of Tempe says the Walgreen's is relocating this Thursday into a newly constructed building just down the way from the current store at the same intersection, just in the southwest corner. Therefore the building will become vacant for Tesco to remodel into one of its 10,000 -to- 13,000 square foot Fresh & Easy grocery and fresh foods markets.

Walgreen's is making the move because it wanted a larger and more modern store in the neighborhood.

While the proposed Fresh & Easy market isn't actually in the "food desert" downtown core of Tempe, being only one mile away will offer downtown residents a much more convenient location for grocery and fresh foods shopping than is currently available to them downtown.

Additionally, since one of the publicly stated strategies by Tesco for its Fresh & Easy stores is to locate a percentage of the stores in "food desert" communities and urban neighborhoods, opening a store just one mile from downtown Tempe, which is underserved by supermarkets, helps the grocer better fulfill this strategy than it has to date.

Only two of the current 102 Fresh & Easy markets in Southern California, Metropolitan Las Vegas, Nevada and Metro Phoenix, Arizona are located in what can be called underserved or "food desert" neighborhoods. Those stores are both in Southern California -- one in Compton the other in the Eagle Rock district of Los Angeles. The grocery chain is building a third store in a neighborhood underserved by food and grocery stores in a South Los Angeles low-income neighborhood.

Tesco has one Fresh & Easy market in Tempe. That store, at Baseline and Kyrene roads in the city, opened in September of this year. Their are currently about 30 Fresh & Easy grocery markets in the Phoenix, Arizona Metropolitan region.

It's not surprising Tesco's Fresh & Easy would locate the store on the outskirts of downtown Tempe in a building being vacated by Walgreen's. Fresh & Easy Neighborhood Market has located many of its current stores next to or near Walgreen's drug stores in all three of the markets its in. The grocer also has modeled its "critical mass" retail strategy -- opening numerous stores within a couple miles of each other -- after Walgreen's, which uses that strategy nationally in the U.S., which we were the first publication to point out and write about.
Posted by Fresh & Easy Buzz at 7:10 PM