Competitor News: Wal-Mart Stores, Inc. On the Hunt For An Advertising Agency For its Small-Format Marketside Grocery and Fresh Foods Chain 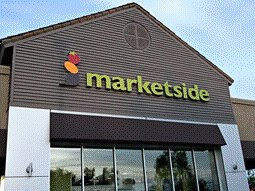 Wal-Mart's small-format, convenience-oriented Marketside fresh foods and grocery retailing venture today invited as many as seven advertising agencies to pitch it campaign ideas to position, market and promote the Marketside stores, reports Advertising Age, the marketing and advertising industry trade publication.
Wal-Mart currently has four Marketside food and grocery markets open. All four of the stores are in the Phoenix, Arizona Metropolitan region. The stores are located in the cities of Gilbert, Mesa, Chandler and Tempe. The first four stores all opened on the same day in early October, as we have reported.
The Marketside food and grocery markets are in the 15,000 square foot range and feature a selection of basic groceries, fresh foods including produce and meats, liquor, wines and beers, an assortment of non-foods, and fresh, prepared foods made in an in-store kitchen. The stores also have small "eat-in" areas where customers can eat the foods prepared in the kitchen if they choose, along with purchasing them to go.
Wal-Mart, which operates Marketside as a separate division with a corporate office in Tuscon, Arizona, plans to open a fifth store in Arizona, in the Phoenix Metro region city of Peoria.
The retailer also plans to open five stores in Southern California. Thus far Fresh & Easy Buzz has reported that two of those stores will be in San Diego County, including one Marketside unit in downtown San Diego.
Advertising Age didn't name any of the seven advertising agencies Wal-Mart's Marketside reached out to in its report today, which you can read here.
However, the publication did comment that it's unclear whether Interpublic Group of Cos.' Martin Agency, Richmond, Va., which is the current incumbent agency on the retailer's cornerstone Wal-Mart U.S. account, is among the agencies being vetted.
"We have not announced any plans regarding marketing for this area of our business," a Wal-Mart spokeswoman told Ad Age. But, as you can imagine, we frequently have informal discussions with a number of agencies." (That's essentially a confirmation from the Wal-mart spokeswoman; what's called a non-denial denial in journalism.)
Fresh & Easy Buzz talked to one of our Wal-Mart corporate sources this afternoon who confirmed to us the mega-retailer was searching for an advertising agency to create a positioning and marketing campaign for Marketside.
Our source didn't have or offer the names of any of the prospective advertising agencies either.
We believe it's likely since the four (and soon to be five when the Peoria, Arizona store opens soon) currently open Marketside fresh food and grocery stores are in Arizona, along with the fact the next five are set to be in Southern California, that the agency chosen would either be based in the Western U.S. or be a national agency based elsewhere in the country but have a strong Western U.S. office.
We base our analysis and opinion on the fact Wal Mart's Marketside has put a fairly strong emphasis on local marketing, merchandising and operations with Marketside, which is one of the main reasons Wal-Mart Stores, Inc. set Marketside up as a semi-autonomous division with its own headquarters in Tuscon, Arizona.
Wal-Mart plans to have the first ten Marketside stores open by the end of the first quarter of next year. It then plans to study, evaluate and review how the stores are doing. From there plans call for opening more of the stores, assuming they meet the company's performance standards and other evaluative criteria, in the Western U.S. and elsewhere in the United States.
The initial 'open the first ten Marketside stores then evaluate' strategy hasn't stopped Wal-Mart from shopping for and identifying additional Marketside store locations in Arizona, California and elsewhere in the west, as we've reported previously in Fresh & Easy Buzz.
For a selection of past reports, stories and analysis About Wal-Mart's Marketside from Fresh & Easy Buzz, click here and here.
Today's report in Advertising Age also quotes Fresh & Easy Buzz's reporting and writing about Wal-Mart's Marketside, which we've been doing extensively, including breaking numerous stories, since December, 2007.
Posted by Fresh & Easy Buzz at 6:28 PM