'Syrah Palin Organic:' An Election Season Wine Both Democrats and Republicans Can Find A Use For On Election Day USA 2008 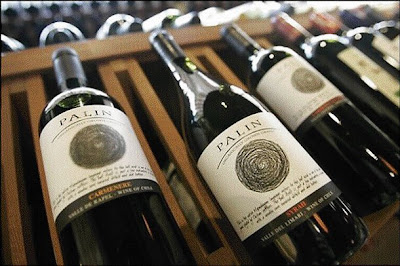 On election day, a certain brand of Chilean organic wine imported into the U.S. by Berkeley, California wine importer and distributor North Berkeley Imports , is getting an unusual amount of attention in parts of America.

It's not all positive attention though. In fact, consumers' attitudes and opinions about the organic Chilean wine, named Syrah Palin (pictured on display at top, left), seem to be more about whether or not they support the Republican Presidential ticket of John McCain and Sarah Palin or the Democratic ticket of Barack Obama and Joe Biden rather than whether or not they like the taste of the wine.

Yes, the "Syrah" (Sarah) variety wine, spelled Palin (pronounced "Pay- Leen) just like the Republican Vice Presidential candidate's last name, has a political season ring to it. And in Berkeley, arguably the most liberal city in America, it is raising a few eyebrows.

According to the wine importer and distributor's Web site, the vintner's (Palin wines) and wine's name "describes a ball that was used in an ancient game played by the Mapuche, a group of people indigenous to central Chile, where the vintner is based. It has nothing to do about Alaska, governors, moose hunting, $150,000 wardrobes or other attributes involving Senator John McCain's Vice Presidential running mate, Sarah Palin.

However, wine drinkers in Berkeley, the San Francisco Bay Area and other parts of the country where the organic wine is being distributed by the importer, are obviously connecting the Syrah Palin wine to the Governor of Alaska, who wants to be the next Vice President of the United States. Some consumers are getting a chuckle out of the resemblance, others are not as happy about the namesake wine.

For example, Chris Cavelli, the co-owner of San Francisco's Yield Wine Bar, which is offering Syrah Palin organic wine for sale by the glass, says "they (customers) just are basically saying, 'Oh, I don't want to drink that. That's too close.' It reminds them too much of Sarah Pain," he says.

Cavelli adds that prior to Governor Palin getting the Republican Vice Presidential nomination, Syrah Palin wine was selling briskly at the wine bar. "I actually think the whole thing is pretty funny," he says. Cavelli said he plans to keep it on the wine list at Yield Wine Bar.

But in other parts of the Bay Area and elsewhere, importer David Hinkle, owner of North Berkeley Imports, says there's been an "uptick in sales of the Syrah Palin organic wine since the Governor of Alaska was nominated as John McCain's Vice Presidential running mate.

Hinkle avoids any political connection to the wine. Since he imported it from Chile long before Sarah Palin was nominated, such a thought was the farthest thing from his mind.

"The wines (Palin brand) are outstanding," he says. "Very rich, full-bodied. There's nothing political about the wine in any way."Well, at least intentionally.

Of course, we suspect a few San Francisco Bay Area Democrats are buying the Syrah Palin wine anyway. Perhaps as a keepsake. Or maybe they are planning to break the bottle against a John McCain-Sarah Palin campaign sign celebration style if Barack Obama and Joe Biden wine the Presidency today.

On the other hand, Berkeley wine importer Hinkle might want to call Sarah Palin and pitch his Syrah Palin as the wine of choice for the Presidential victory parties tonight in the event the McCain-Palin ticket wins. We also could see big in-store displays on November 5, the day after the election, if McCain-Palin wins.

But if they lose, well...'Que Sera Sera' (pronounced Saraaah) [Whatever will be will be], as Doris Day sang in the famous song of the same name.
Posted by Fresh & Easy Buzz at 1:24 PM