'Will it Play In Peoria?' Wal-Mart Will Open its Fifth Arizona Marketside Store Later This Year in Peoria, Arizona 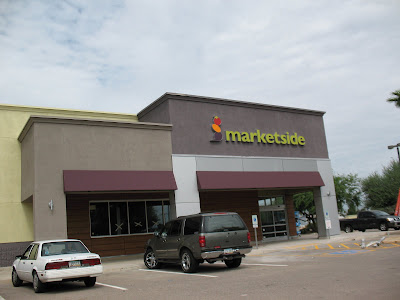 With still a week yet left until it opens its first four small-format combination grocery and fresh foods Marketside stores in the Phoenix, Arizona Metro region cities of Gilbert, Chandler, Mesa and Tempe, Wal-Mart already is preparing another store to open later this year in the Arizona city of Peoria, Fresh & Easy buzz has learned. [The Mesa Marketside store is pictured above.]
The Peoria, Arizona store will be Wal-Mart's fifth Arizona Marketside store thus far.
Two new additional Marketside stores in Southern California, one in San Diego and the other in nearby Oceanside (both which we've reported on), are scheduled to open this year before the Peoria, Arizona store does, according to Amee Chande, vice president of strategy and marketing for Wal-Mart, Inc.
Additionally, as we've previously reported, Wal-Mart has identified other Arizona and Southern California locations for its Marketside stores, as well as looking for locations in Northern California, primarily in the San Francisco Bay Area.
Peoria, which is located in the Northwest Valley region in the Phoenix Metropolitan area, is Arizona's ninth-largest city with a population of about 153,592 (2007) residents.
Wal-Mart chose Peoria as the location for its fifth Marketside location based on research and demographic data the retailer has collected due to its extensive retail presence in Arizona with its Wal-Mart Supercenters, Sam's Club stores and Wal-Mart Neighborhood Market supermarkets, which all offer food and grocery items, according to a Wal-Mart source.
Peroria has a mix of residents including young professionals and high-income retirees. Wal-mart believes the community offers a good consumer base for its Marketside stores, which will offer about 5,000 -to- 10,000 ingredient skus (shelf-stable groceries, beverages and fresh foods like meat, produce, dairy and the like) and ready-to-eat and ready-to-heat fresh, prepared foods items made right in the stores.
Wal-Mart is referring to all of the food and grocery items the stores will offer as ingredients, positioning the Marketside stores as "food-centric," yet affordable combination fresh food and ingredient (read grocery) markets.
Marketside stores will offer basic groceries and natural, organic and specialty products; fresh produce, meat and bakery; beers, wines and spirits; and fresh, prepared foods, featuring an in-store kitchen and even a small sit-down eating area for customers to have breakfast, lunch or dinner at in the store.
Resources:
Recent related stories from Fresh & Easy Buzz - Wal-Mart and Marketside
Wal-Mart Offers its Own 'Peek' Inside it's Small-Format Marketside As Part of A One-Week Countdown to the Stores' Oct. 4 Openings in Arizona
Fresh & Easy Buzz Gets A Peek -- And it Was Only A Peek -- Inside One of the Four New Wal-Mart Marketside Stores Opening in Arizona On October 4
Real Estate Group Selling the Four Wal-Mart Marketside Small-Format Grocery Stores Set to Open on Oct. 4; Plus Data on the Store's Exact Sizes
Special Report: Wal-Mart, Inc. Studying Second Small-Format Food and Grocery Store Concept; the 'Bodega' or Modern Version of the Corner Grocery Store
CEO's Can Say the 'Darndest Things': Wal-Mart CEO Lee Scott Says He Has Faith Tesco Will Succeed With Fresh & Easy; It's A Small-Mart World After All
Wal-Mart's Chief Merchandising Officer Reiterates CEO's Words that it's 'Keeping Tabs' On Tesco's Fresh & Easy Today at Bank of America Conference
Posted by Fresh & Easy Buzz at 9:44 PM