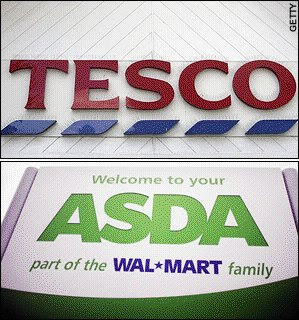 Tesco, the number one food and grocery retailer in the United Kingdom with an approximate 31% market share, and Wal-Mart, Inc.-owned Asda, the UK's number two supermarket chain with just a little over half (about 17%) Tesco's share of the food and grocery sales market, have kicked off what the British press and industry analysts are calling arguably the most intense price war in recent food retailing history in that nation.

As we've written about before in Fresh & Easy Buzz, Wal-Mart's Asda, under the leadership of CEO Andy Bond who is a British national, stepped-up its new store development program, store remodels, quality of merchandising and price profile (lower) last year.

Wal-Mart, which acquired Asda a few years ago, had considered selling the British chain. However, instead of doing so, it made a strategic decision last year to invest a significant amount of money in Asda, and to take a run at increasing market share against home country Tesco, which is based in the United Kingdom and is the world's third-largest retailer. Wal-Mart is the worlds leading retailer. France's Carrefour Group is number two.

Two of the United Kingdom's major daily newspapers, the Telegraph and the Times, wrote about the opening salvo of the Tesco vs. Asda price war in today's respective editions. The two retail chains kicked off the price war yesterday, both lowering the prices on thousands of food and grocery products across all categories in their respective stores.

Below are links to the stories from today's UK Telegraph and the Times:

Telegraph.uk.co: Tesco and Asda go to war with price cuts

Tesco and Wal-Mart-owned Asda aren't just lowering the prices of thousands of grocery items and launching a price war because they want to save British consumers money in these super- high food inflation times, although that is a small part of the reason.

Tesco and Asda also aren't merely focusing on each other in terms of the food and grocery retailing competition in the UK, even though the chains are number one (Tesco) and number two (Asda) respectively in the country.

Both Tesco and Asda are concerned about the two Germany-based small-format, limited assortment, no frills deep discount grocers, Aldi and Lidl, which are expanding rapidly and gaining shoppers rapidly in the UK.

Aldi-UK and Lidl-UK are gaining the highest percentage of market share among all retailers in the country because of the high food inflation and resulting price competition. The German chains operate on a bare bones, hard discount model, offering the lowest retail prices on food and grocery products in the UK.

And if the two German discounters aren't competition enough for Tesco and Asda from a price perspective -- which has become the most important thing in the minds of average British consumers as it is currently with U.S. shoppers -- Denmark-based Netto, which operates numerous (and is adding many more) small-format, no frills, deep discount stores similar to Aldi's and Lidl's in the UK, also is nipping at Tesco and Asda's merchandising heels from a price perspective.

In part, for Tesco and Asda the what to do is what both chains did yesterday: lower the prices on thousands of items in the stores in order to better compete with these little deep discount stores so they won't lose a significant percentage of market share in these tough economic times.

When you have a 31% share of the market in the UK like Tesco does, which represents lots of British Pounds, losing even 1% or 2% is a very big deal. The same is the case for Asda with its about 17% share.

Tesco is fighting back against not only Asda (and Asda Tesco) but the no frills deep discounters as well -- and is doing so in a number of ways.

In addition to lowering prices yesterday, Tesco is introducing a new price-focused, no frills value line of products in its stores. This line is aimed directly at countering the cheap store brands offered by Aldi, Lidl and Netto in the UK.

Today's edition of the Financial Times has a piece about Tesco's targeting Aldi and Lidl. You can read the story here: Tesco targets Aldi and Lidl.

Additionally, Reuters Business has a piece about Tesco's new line of products, which are called Discount Brands. Tesco is initially rolling out 350 items under the brand, including biscuits, teas, cleaning products, hair care items and more. You can read the story here: Tesco launches new low-cost range, cuts prices.

While Tesco attempts to make inroads with in the United States, which is Wal-Mart country (U.S-based Wal-Mart is the number one food and grocery sales market share leader currently in the U.S.) with its small-format, combination basic grocery and fresh foods Fresh & Easy Neighborhood Market grocery stores, Wal-Mart is upping its anti in the UK with Asda.

For Wal-Mart with Asda in the UK, it's position as the second-largest retailer in the country with a 17% market share is not a bad one. If it can hold that share with the attack of the small-format deep discounters Aldi, Lidl and Netto nipping at its and Tesco's heels during the down economy and these high food inflation times, its should be positioned well for when the economy improves.

Similarly, Tesco is without a doubt in a solid position in the UK. After all, its markets share of about 31% equals the combined total of number two Asda and Sainsbury's (the UK's number three supermarket chain with about a 15.5% market share).

On the other hand, Tesco's Fresh & Easy is just a start up in the U.S. So the retailer has miles to go -- perhaps a major acquisition of a major U.S. supermarket chain -- before it even puts market share numbers on the board in the U.S.

Despite this across the pond imbalance (advantage Wal-Mart), Wal-Mart and Tesco both play in the larger global retailing arena. However, protecting their respective home bases of the United States (Wal-Mart) and the United Kingdom (Tesco) is key to both chains' global strategy and success.

As a result, expect to see more price competition from Tesco and Asda this year and into 2009 in the UK. With the perfect storm of economic negatives affecting the U.S. and the UK, its doubtful we are going to see a break in the soaring cost of food and grocery products anytime soon, after all.
Posted by Fresh & Easy Buzz at 7:17 PM