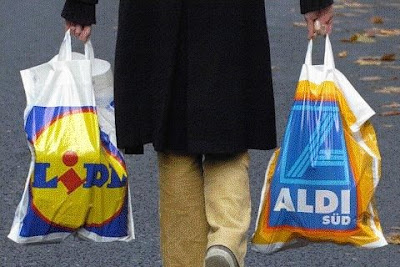 TNS said prices at grocery stores surged 9 percent from year earlier levels during the 12 weeks, picking up from the 6.8 percent pace on that basis in the 12 weeks to July 13. Inflation has lured more Britons to discounters over Tesco and London- based J Sainsbury Plc, the No. 3 U.K. grocery chain, which are both bolstering their cheaper product ranges. Asda, the second- largest, today said it will cut prices on more than 5,000 goods.

Shoppers are "responding to strong low-price messages,'' Ed Garner, director of research at TNS Worldpanel, said in the market-research firm's statement.
"Younger, larger families are responding to the squeeze on their housekeeping by driving discounter turnovers up sharply.'' To be sure, food prices are expected to start falling towards the end of the year, TNS said. Asda Chief Executive Officer Andy Bond said in a statement today that "food price inflation has peaked.''

Asda's new prices, to be introduced tomorrow, will include 30 pence (53 cents) for a loaf of bread in the Smart Price range and 48 pence for a pack of eight sausages, the company said.

Even though these are small losses and gains for Tesco and Sainsbury's, they're significant because Tesco, Asda and Sainsbury's are the top three chains (in that order) in the United Kingdom. Each fraction of a percentage point of a loss or a gain represents real money, particularly for Tesco which has about 31% of the total food and grocery market share in the country.

The news that it gained 0.3% while rivals Tesco and Sainsbury's lost 0.2% each respectively, is good news for Wal-Mart's Asda.

The three chains are considered in the superstore category, operating similar format food and grocery stores. That format, represented by these top three chains, is currently the hardest hit in the UK, with shoppers flocking to the deep discounters like Aldi, Lidl, Iceland, Netto and a couple others because of the soaring food prices in the country.

It's likely that Asda's value program it started earlier this year, which included creating low-price value zones in its stores, has helped the chain gain a slight amount (the 0.3%) of share, while it's two similar format rivals both lost a similar amount (0.2%) of market share.

And of course, as we wrote earlier in this related piece, " Tesco and Wal-Mart-Owned Asda Launch Price War in the UK; Small-Format Discounters Aldi, Lidl and Netto Nipping At Both Giants' Merchandising Heels," the small-format, no frills, deep discount grocers Aldi and Lidl keep adding share at the expense of those chains losing share.

Aldi and Lidl are tiny in terms of overall market share in the UK. However, both German retail chains are rapidly building and opening new stores in the UK. In other words, not only are they a current threat, they pose an even stronger medium -to- long range threat as more of their stores come on line.

It's no surprise Tesco is fighting back with the lowering yesterday (Asda did so again as well) of thousands of prices on items in its stores, along with the introduction of a new line of 350 bargain-priced food, grocery and non-foods products designed to combat both Asda's value program and even more specifically to counter the everyday low-priced store brand grocery items Aldi and Lidl sell.

Although it can't control the UK economy (despite what some Brits believe), it appears Tesco is willing to reduce thousands of item prices, and perhaps lose margin, in these bad economic times in order to stop losing market share. Despite being clear and away the market share leader in the UK, Tesco isn't one to rest on its success, even if doing so means only losing 0.2% of its about 31% market share.

We'll see what happens though, since the competition like Wal-Mart's Asda and others are far from sitting still. And, the new highly competitive factor in the UK are the small-format, no frills deep discounters Aldi, Lidl and Netto. The only place they plan on going is up. Up in store counts, up in sales and up in market share.
Posted by Fresh & Easy Buzz at 9:04 PM