Fresh & Easy Planning to Introduce Over 200 New Store Brand Items By the End of the Year; Prepared Foods, Coffees and Teas, Snacks Among the Selection 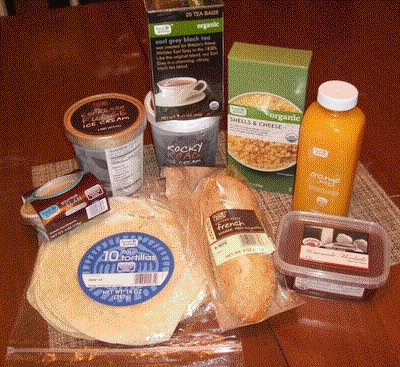 Tesco's Fresh & Easy Neighborhood Market plans to introduce at least 200 new products across most categories under its fresh & easy store brand label between now and the end of the year, the grocery chain said today in a press release.

In its press release Fresh & Easy says: "Over 80% of customers cite Fresh & Easy's own-brand products as one of the main reasons they shop at the stores, based on the company's customer surveys.

It would be very helpful as consumers of information and analysts and reporters if this information, especially when claiming such a high percentage (80%) was made available, even as a single paragraph in the press release. This is a common practice when siting consumer survey data. We encourage Tesco to include it in future releases.

Fresh & Easy Buzz asked a spokesperson for Tesco's Fresh & Easy Neighborhood Market for this information in the past. We were told the grocery chain doesn't provide that information, which is rather odd since it is methodological information rather than being proprietary.

All fresh & easy store brand products are produced without artificial flavors or colors. Additionally, the retailer says they contain no added trans fats and only use preservatives when absolutely necessary. The 200 new store brand products will be produced using these same guidelines, according to Fresh & Easy Neighborhood Market. Fresh & Easy also offers a selection of organic products in its stores which currently are priced below most of the competition, based on our competitive pricing surveys.

Many of the 200 new fresh & easy store brand products, such as the Vegetable Curry with Brown Rice, Mushroom Stroganoff, Chicken Parmesan with Linguine, Broccoli and Cheese Soup, Shrimp Alfredo and the Orange Chicken are fresh, prepared foods items, which represents the "fresh" side of Fresh & Easy. The grocery chain offers a combination of basic grocery items, fresh meats and produce, craft beers and wines, prepared foods and a small assortment of non-foods items in its convenience-oriented grocery stores, which average about 10,000 -to- 13,000 square feet. 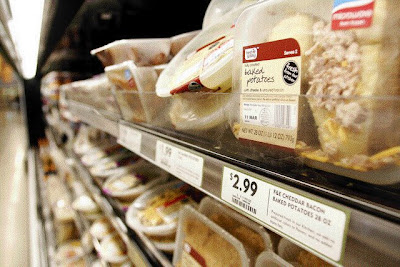 Fresh & Easy Neighborhood Market's ready-to-eat and ready-to-heat fresh, prepared foods (like the cheddar cheese and bacon-stuffed baked potatoes in the photograph) are branded under the fresh & easy label. The foods are created by an in-house chef and prepared at a central kitchen in Southern California, then delivered to the stores in California, Nevada and Arizona.

Fresh & Easy opened three new stores in Arizona this week, bringing its total number of grocery markets in Southern California, Nevada and Arizona to 78 as of today. Many more Fresh & Easy stores will open throughout the rest of the year in these three markets. Next year Tesco will begin opening its first small-format Fresh & Easy grocery stores in Central and Northern California, in the Bakersfield and Fresno regions, the Sacramento Metropolitan area and in the Northern San Joaquin Valley, and in the San Francisco Bay Area.

In its press release distributed today Tesco's Fresh & Easy Neighborhood Market sites a recent survey conducted by the Food Marketing Institute (FMI), the leading supermarket industry trade association in the United States, in conjunction with describing its introduction of the new prepared foods items portion of the new product launch.

The 2008 Food Market Institute U.S. Grocery Shopper Trends study, the results of which were released in May, 2008 at the FMI annual convention in Las Vegas, Nevada, found that higher fuel and food costs and other economic pressures are having a pervasive impact on how consumers shop, cook and dine in 2008. 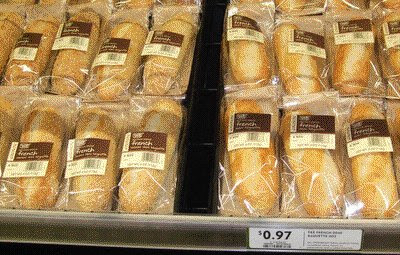 The fresh & easy store brand is used on a variety of fresh bread items in the stores.

The scientifically-based survey, a random sample of 2,020 U.S. shoppers conducted for FMI by the Harris Interactive polling firm, also found that "economic concerns are compelling Americans to cook at home more and eat less often at restaurants (71 percent). In fact, families eat their main meal at restaurants only 1.2 times per week, down from 1.3 in 2007 and 1.5 in 2006," according to the survey results.

[Note: Respondents to the Harris Interactive/FMI study met the following requirements to participate in the survey: a minimum of 15 years of age, primary or equally shared responsibility for food shopping, and they must have shopped for groceries in the past two weeks. This information is provided by FMI in its news release of that survey. It's the type of one paragraph information we would like to see Tesco's Fresh & Easy provide so that we, and our readers, can know how they conducted their "customer survey."]

Additionally, the Harris/FMI survey found consumers equate eating at home with eating healthier. As many as 91 percent say they eat healthier when dining at home, according to the report. This number includes 39 percent who believe home-cooked food is "much healthier" than food consumed outside the home. Families also save money since a restaurant meal costs more than twice as much per person, a median of $12 compared with $5, according to the survey results.

Further, according to the survey, consumers remain challenged planning meals, especially dinner. In fact, 28 percent of consumers do not know what they will eat two hours before dinnertime on weekdays; the number jumps to 35 percent on weekends. On weekdays, those most likely to lack plans are members of Generation Y (46 percent), single men (43 percent) and single mothers (38 percent).

Two hours before dinnertime, many have not even decided whether to eat at home or a restaurant. On weekdays, the plan-less are led by Generation Y (27 percent), single mothers (21 percent) and single men (19 percent).

These consumers create a large market for fast-food, takeout and delivered meals, FMI says based on the results of the survey. Supermarkets are responding with meal solutions and quick-stop areas for dinner, often featuring their own checkout stands. The number of food retailers featuring quick-stop areas increased from 36.8 percent in 2007 to 50.6 percent in 2008, according to The FMI Food Retailing Industry Speaks 2008 report presented at the May convention in Las Vegas. 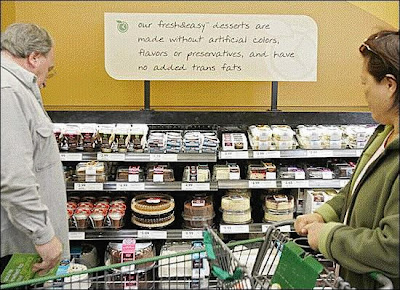 Most of the dessert items in Fresh & Easy stores are branded under the fresh & easy store label.

Tesco's Fresh & Easy and numerous other food retailers are tapping into this consumer trend (prepared foods merchandising) towards needing to save money, eating less at restaurants, but desiring fresh, prepared ready-to-eat and ready-to-heat meals they can purchase at affordable prices.

For example, SuperValu, Inc., which is coming a bit late into the prepared foods arena but doing so in a major way, announced this week it's introducing a line of premium yet reasonably-priced prepared foods into all of the supermarket chains it wons in the U.S., including its Albertsons supermarkets in Southern California and Arizona.

Safeway Stores, Inc., which owns the Vons chain in Southern California and the Las Vegas Metropolitan market, and operates under its own Safeway banner in Northern Nevada, Arizona and Northern California, has staked a significant position in the fresh, prepared foods category, both with its premium branded Signature Cafe ready-to-eat and ready-to-heat fresh, prepared foods, along with a more value-priced line.

Other food retailers in California, Nevada and Arizona taking a major stake in the prepared foods category include Kroger, Inc. the number one U.S. supermarket chain), which owns the Ralphs chain in Southern California, along with other banners throughout the U.S.. Kroger recently introduced an expanded line of fresh, prepared foods to its chains, including a number of premium but value-priced dinner entree items designed to feed a family of four for $10.

Others grocers such as Whole Foods Market, Inc, Gelsons in Southern California, Bashas (both its Bashas and A.J's Fine Foods banners) in Arizona, Trader Joe's and many others are continuing to increase the quantity and variety of prepared foods items they offer in their respective stores.

Tesco's Fresh & Easy has been a promoter of the fresh, prepared foods category even though its first stores have been open less than a year.

The category was fast-growing already in U.S. supermarkets prior to Tesco's arrival on U.S. shores with its small-format combination basic grocery and fresh foods markets in California, Nevada and Arizona in the fall of 2007.
However, the major focus on the prepared foods category in the Fresh & Easy stores as focused competing grocers much more on the category we believe than they would have were Tesco not making such a serious and major effort with Fresh & Easy and in the prepared foods category in the U.S.
Since Tesco's plans to devote a significant amount of square footage to the fresh, prepared foods category were made in 2006, the retailer was on trend in terms of envisioning the category's growing development in the U.S.
The 200 new items being introduced by Fresh & Easy come on the heels of numerous new items the grocery chain introduced earlier this year. With less than one year (that birthday will come next month in late October, 2008) of store operations, Tesco is showing it isn't afraid to product create and store brand with Fresh & Easy, which is something Tesco, the world's third-largest retailer, is famous for doing in the United Kingdom and elsewhere globally where it has stores.
Posted by Fresh & Easy Buzz at 8:13 PM