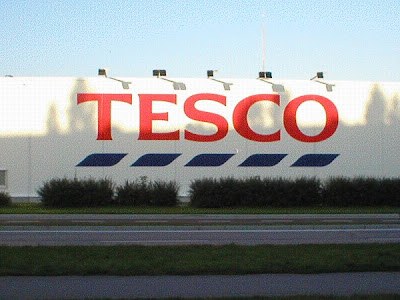 Tesco PLC, which owns the Fresh & Easy Neighborhood Market grocery chain in the Western USA, will release its interim (quarterly) financials tomorrow in the United Kingdom.

Although Tesco, which is the number one food and grocery retailer in the United Kingdom and the third largest retailer in the world, is a bit under assault at home in Britain, primarily from Wal-Mart-owned Asda (the UK's number two retailer) and the small-format, no frills deep discount grocery chains Aldi, Lidl and Netto, industry analysts aren't expecting any major great surprises in Tesco's overall numbers tomorrow.

In terms of in the UK, which accounts for the largest portion of Tesco's global sales, the retailer's sales share has dropped slightly, from 31.7% to 31.5%, in the latest (released last week) market share figures. However, Tesco remains far and away the UK's leading retailer. Number two Asda has about 17.5% of the UK's food and grocery sales market share, for example. Number three Sainsbury's has about a 16% share.

Of most keen interest though is that Tesco has said it will report some sort of guidance tomorrow on the performance of its small-format, convenience-oriented, combination grocery and fresh foods Fresh & Easy Neighborhood Market USA chain, which currently operates 87 stores in Southern California, Metropolitan Las Vegas, and in the Phoenix, Arizona Metropolitan region market.

As we reported on September 26, it's unknown at present if Tesco will report any specific sales, profit or loss numbers to date for Fresh & Easy. We will have to wait until tomorrow to find out what form that guidance takes.

A number of analysts are expecting positive overall financials for Tesco PLC when its interim numbers are reported tomorrow.

US-based Citibank is predicting an 11% increase in trading profits to £1.39bn for Tesco, and second quarter same store sales growth of 4%, for example.

We've estimated per-store, per-week average sales of the 87 U.S. Fresh & Easy stores are currently in the $125,000 -to- $150,000 range. This is compared to a target of about $200,000 in weekly average sales Tesco had hoped its Southern California-based Fresh & Easy Neighborhood Market would be at at this point in time.

U.S. supermarket average sales per square foot in the U.S. are $11.27 per square foot, according to the Food Marketing Institute (FMI), the leading food and grocery retailing trade association in the U.S. Tesco's Fresh & Easy stores average 10,000 -to- 13,000 square feet in selling space.

September 26, 2008: Tesco PLC, Fresh & Easy and the Numbers Game; Will Tesco Release Hard Numbers For Fresh & Easy Next Week? If So, Will They Be Meaningful?

September 12, 2008: CEO's Can Say the 'Darndest Things': Wal-Mart CEO Lee Scott Says He Has Faith Tesco Will Succeed With Fresh & Easy; It's A Small-Mart World After All
Posted by Fresh & Easy Buzz at 10:48 AM