Wal-Mart Offers its Own 'Peek' Inside it's Small-Format Marketside As Part of A One-Week Countdown to the Stores' Oct. 4 Openings in Arizona 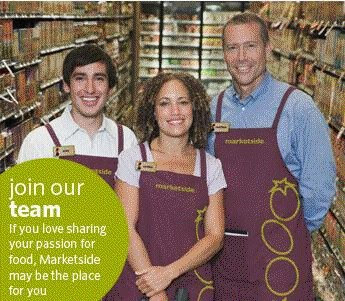 In this September 26 piece, "Fresh & Easy Buzz Gets A Peek -- And it Was Only A Peek -- Inside One of the Four New Wal-Mart Marketside Stores Opening in Arizona On October 4," we shared with our readers what we were able to see inside one of the four Wal-Mart Marketside combination grocery and fresh foods markets set to open on October 4 in the Phoenix, Arizona Metropolitan region cities of Glibert, Chandler, Mesa and Tempe.

Today Wal-Mart is offering a "preview peek" of its own into Marketside, having added a new section to its Marketside website here.

Just seven days before the first four Marketside stores open, Wal-Mart is pulling back the figurative window shades a bit to reveal, as you can see at this link, the floor plans, departments, some of the products, and a few of the prices at Marketside.

Additionally, as we've been reporting, the Marketside stores' grocery selection will include basic food and grocery items, along with specialty, natural and organic items. There isn't a mention of store brand food and grocery items in the new website section. But the stores will have them. Look for the store brands "Field & Vine" and "Wild Thyme" (and perhaps others)when the markets open on October 4, for example.

Further, as we've reported previously, Wal-Mart confirms on the website the Marketside stores will sell a selection (about 200 they say) of domestic and imported craft beers and wines. All of the wines will be $10 or under, according to Wal-Mart.

The Marketside stores also will sell a selection of spirits. Tesco's Fresh & Easy Neighborhood Market stores sell beer and wine but not spirits, making the fact the Marketside stores do so a point of differentiation between Wal-Mart's and Tesco's respective small-format grocery store offerings.

As we've reported all along on Fresh & Easy Buzz, a major offering of the small-format Marketside stores will be in-store fresh, prepared foods prepared in an in-store kitchen.

The new Marketside website section offers a sampling of the types of in-store fresh, prepared foods the stores will offer. These ready-to-eat and ready-to-heat foods include prepared meals like chicken tamales with Spanish rice and steak fajitas with grilled onions and red rice, which range in price from $6 for single-sized entrees to $8 for family-sized entrees. They also offer $4 appetizers and $2 side dishes like salads.

Marketside stores also will offer different weekly complete ready-to-eat or take home and heat meal solutions at affordable prices, like the two family meals here; one for $14 and the other for $18, along with lots of other grab-and-go, lunch, dinner, side dish and related prepared foods offerings.

As we've reported previously, the Marketside stores have in-store kitchens, along with an in-store eating area that can seat 9-10 customers/diners at a time. The major focus of the stores' prepared foods offering though is take home.

Having in-store kitchens where the food is prepared right in the store, along with offering the in-store eating area, is another point of differentiation between Wal-Mart's Marketside and Tesco's Fresh & Easy.

Wal-Mart also has added an expanded "Who We Are" section on the Marketside website, describing a bit more from a marketing standpoint what the store format is, as well as discussing the store associates, the food-oriented mission of the stores, and related topics. [Click here to view that new section.]

Wal-Mart also is using its http://www.marketside.com/ website to conduct a "countdown" between now and October 4 regarding the four stores opening on that date in Chandler, Mesa, Gilbert and Tempe, Arizona. View the bottom of the screen here [The map locations and addresses of the four stores are here.]

Wal-Mart's Marketside team has been taking a leaf from Tesco Fresh & Easy Neighborhood Market's marketing playbook, having it's headquarters and store associates visit residents in the neighborhoods where the four Marketside stores will open on October 4, handling out brochures, store coupons and welcome bags full of free Marketside store products to the residents. Wal-Mart has a separate office for Marketside in Tempe, Arizona where operations will be run out of.

This is the text of the letter or brochure the members of the Marketside team are giving neighborhood residents along with the free goodies, coupons and related promotional materials as they go door-to-door in the neighborhoods.

Wal-Mart's philosophy behind doing this is it wants to catch shoppers where there are at the point-of-purchase in the store -- the produce department, meat department, bakery and the like -- so they can generate impulse sales right there rather than have shoppers go to a central area in the store for product samples like is the case at Fresh & Easy stores.

In each Fresh & Easy store there is an in-store sampling area or station called "The Kitchen," where various prepared foods are offered for customer sampling. The shoppers have to go to the area to sample though, rather than having the samples come to them like is the case with the sampling stations located throughout the Marketside stores.

Most U.S. food and grocery stores do the same as Wal-Mart plans to do with Marketside, offering sampling throughout the various store departments.

Wal-Mart also has added a new tag-line to its Marketside logo. That tag-line, as we reported the retailer would be doing in its marketing and positioning for the small-format chain, emphasises the stores' value proposition as well as its focus on food. It reads: "marketside: deliciously affordable."
Posted by Fresh & Easy Buzz at 7:09 PM