Competitor News: Wal-Mart Joins Tesco, Others in Announcing A Plastic Bag Reduction Program of its Own 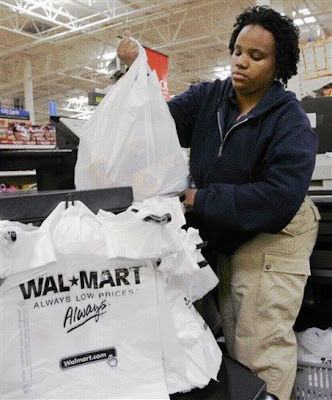 Wal-Mart, Inc. said today it will give out fewer plastic shopping bags in its stores, and encourage shoppers to reuse and recycle them, as the retailer aims to slash its plastic bag waste by a third worldwide by 2013.

Wal-Mart and its partner in the initiative, the Environmental Defense Fund organization, said today the plan is expected to cut the equivalent of 9 billion plastic bags from Wal-mart stores each year, and eliminate more than 135 million pounds of plastic waste globally in the next five years.

Additionally, The world's largest retailer said it's goal is to reduce plastic bag waste by 25 percent in its U.S. stores and 50 percent in other countries where it operates stores.

"If we can encourage consumers to change their behavior, just one bag at a time, we believe real progress can be made toward our goal of creating zero waste," says Matt Kistler, senior vice president for sustainability at Wal-Mart.

Kistler says Wal-Mart's U.S. stores will begin selling a new 50-cent reusable bag in October. All of its store clerks and baggers will be trained to pack bags more efficiently as well, according to the retailer's chief of sustainability.

Earlier this month, its Wal-Mart Mexico stores introduced reusable bags that cost one-third less than the previous ones.

Numerous environmental groups are giving Wal-Mart kudos for its new plastic bag reduction policy. Others are saying it's far from enough, especially from the world's largest retailer.

We applaud their efforts, but 33 percent by 2013 is not a very aggressive goal. It's doable ... by 2010 or 2009," Stephanie Barger, the executive director of Costa Mesa, California-based Earth Resource Foundation, which runs the "Campaign Against the Plastic Plague," said today in a statement.

An interesting aspect of Wal-Mart's new single-use plastic carrier bag reduction program is that the retailer has taken on the environmental group the Environmental Defense Fund as a partner in the cutback scheme.

Wal-Mart and the Environmental Defense Fund aren't new to each other however. The environmental organization began working with the mega-retailer in 2005 when Wal-mart started its corporate and retail sustainability program.

"I think the way they're (Wal-Mart) going about it (the plastic bag reduction program) is the way that works for them," Ms. Ruta said regarding the comments by other environmentalists that Wal-Mart isn't going far enough to reduce the volume of plastic bags it uses in its stores. "They're (Wal-Mart) going to try lots of different things, see what works best and move forward, but against clear, very measurable goals and timeline."

In this August 13 story, "Tesco to Offer Shoppers Free Plastic Bags in UK Stores Only if Requested; Still Offering Plastic Bags-Only in Fresh & Easy USA Stores; No Paper Option," we wrote about the major plastic bag reduction program Tesco, which owns the Fresh & Easy fresh foods and grocery chain in the Western U.S., launched last month in the United Kingdom.

Under Tesco's new program in the UK, the retailer says it will only give shoppers free plastic bags at checkout if they ask for them. Since Tesco, like nearly all British food retailers, doesn't offer the paper bag option in its stores, which is the norm in the U.S., that means unless Tesco shoppers bring reusable shopping bags with them to the store, the only option is plastic. The use of reusable shopping bags by UK grocery shoppers is much higher than it is in the U.S. however, although Americans are beginning to catch up.

Tesco's plastic bag reduction program in the UK goes farther than Wal-Mart's in terms of actual practical application. The percentage reduction goals of both companies are about the same though.

However, Wal-Mart's new program, according to the company, is international in scope, aiming to reduce the volume of plastic bags its U.S. stores use by 25% and the amount used elsewhere in the world by 50%.

Tesco's plan is a bit more piecemeal, focusing primarily in its home country of the UK.

Tesco's Fresh & Easy USA, which offers only free plastic bags and not paper in its stores, does offer two kinds of reusable shopping bags for sale in the stores.

It sells one of the bags for only 20-cents each. That bag, called a "bag for life," is made out of synthetic, plastic-like material. Fresh & Easy says it will replace the bag "for life" when it wears out, which is an excellent offering. At 20-cents the bag also is less than half the cost of the 50-cent reusable bag Wal-Mart will begin selling in its stores next month. Fresh & Easy stores also sell more expensive canvas shopping totes.

These have been the only two initiatives Fresh & Easy has launched thus far in terms of an attempt to use fewer plastic grocery bags in its 87 stores in Southern California, Nevada and Arizona.

Since the stores don't offer free paper grocery sacks as an option to plastic like nearly every other chain and independent in the Western USA does, and since most American shoppers don't bring reusable shopping bags with them to the grocery store, single-use plastic bags are the default bag at Fresh & Easy stores, just as they are in the UK at Tesco's supermarkets and other format food stores. That is of course unless shoppers bring their own bags, which would be the best solution to this entire issue we believe.
Posted by Fresh & Easy Buzz at 7:29 PM