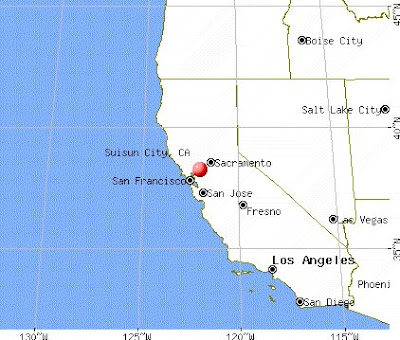 Tesco has locked-up a lease for an additional future Fresh & Easy Neighborhood Market grocery store in the Sacramento-Vacaville Metropolitan region in Northern California.
That store, which will be number 20 thus far in the region, will be located in the Sunset Shopping Center in Suisun City, which is in Solano County near Napa and located approximately on the border of what is considered the San Francisco Bay Area and the Sacramento Valley region, Fresh & Easy Buzz has learned from the Solano County Economic Development Corporation.
This will be Tesco's first Fresh & Easy grocery market in Suisun City. The store in the Sunset Shopping Center will be located in one half of a vacant former Albertson's supermarket in the center. The Fresh & Easy store will use about 13,000 -to- 14,000 square feet of the building, according to a spokesperson for the county's economic development corporation who has been involved in attracting new retail tenants to the shopping center.
Wiengarten Realty, which manages the center at Sunset Avenue and State Hwy 12, says there is a population of 92,900 people within a three mile radius (60,000 within two miles) of the center, with an average income of $68,354.
Tesco has publicly confirmed it plans to open 19 of its small-format, convenience-oriented Fresh & Easy Neighborhood Market combination basic grocery and fresh foods stores in the Sacramento/Vacaville Metropolitan region in Northern California. The first stores should open in early -to- mid 2009. [The graphic below shows where those 19 confirmed Fresh & Easy stores are located in the region.] 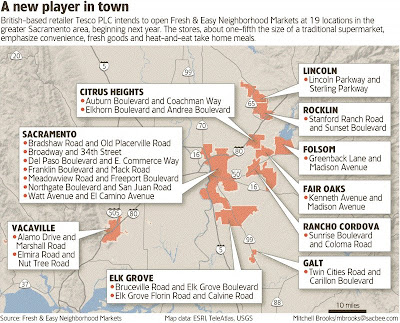 Vacaville is located about 35 miles from Sacramento. The region between Vacaville and Sacramento has increasingly become urbanized over the last 15 years or so from its once mostly rural past. In the 35 -to-40 mile stretch through the Sacramento Valley are cities such as Winters, Woodland, Davis and West Sacramento, all of which have nearly doubled in population in the last 15 years.
Vacaville also is about one hour's drive from the San Francisco Bay Area, where Tesco thus far plans to open 21 Fresh & Easy grocery stores beginning next year. The retailer has confirmed 18 of these 21 locations. Fresh & Easy Buzz has discovered an additional three, one in the city of Pacifica and two in the city of Vallejo, through our reporting. The combined population of the Bay Area and Sacramento/Vacaville region is about 10 -to- 11 million.
As we've discussed in previous pieces in Fresh & Easy Buzz, Tesco's strategy with its small-format Fresh & Easy grocery chain is to locate a "critical mass" of the stores in selected market regions, which to date include Southern California, Metropolitan Las Vegas, Nevada, and the Phoenix, Arizona Metropolitan region. There are 78 Fresh & Easy stores opened to date in these three market regions.
Tesco's Fresh & Easy is following this same strategy in Northern California. It's focusing on the nine-county Bay Area, then out to the Sacramento Valley via Fairfield and Vacaville. It's about a two hour drive for example from downtown San Francisco to downtown Sacramento.
From the Sacramento area, Tesco then is focusing on moving down Hwy. 99 into the Northern San Joaquin Valley, through the cities of Galt, Stockton, Manteca, Tracy and Modesto.
As we reported here, Tesco plans to open one store so far in the city of Modesto, which has a population of about 210,000. Additionally, a Fresh & Easy store also will open in Galt.
Tesco is locating its Northern California distribution center in the Stockton area, as we reported here. Thus far we haven't discovered any Fresh & Easy store sites in Stockton, Manteca or Tracy yet. But based on the retailer's "critical mass" store location strategy and plan for Northern California, we believe it's only a matter of time until we do.
Posted by Fresh & Easy Buzz at 12:26 PM