Tesco PLC, Fresh & Easy and the Numbers Game; Will Tesco Release Hard Numbers For Fresh & Easy Next Week? If So, Will They Be Meaningful? 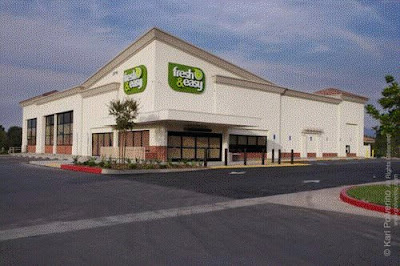 Earlier this year Tesco PLC., which owns Fresh & Easy Neighborhood Market USA, said it planned to breakout some of its sales, profit and related numbers for its American Fresh & Easy grocery store chain, which now has 87 stores in Southern California, Nevada and Arizona, when it reports its corporate financials next week.

Tesco didn't get specific, and didn't say it would provide a comprehensive sales, profit and loss statement for Fresh & Easy. But it did make clear enough that it would offer a breakout of sorts next week, including some store sales numbers and related information.

In fact, United Kingdom investment analysts are expecting some sort of breakout -- hard numbers, sales figures and the like at a minimum.

However, based on information from some of our sources, we aren't sure this is going to happen.

We've learned of three possible scenarios in this regard:

Scenario One: That Tesco PLC. has decided not to release any hard sales and related numbers for Fresh & Easy next week. Instead it plans to offer a summary of the state of the business similar to what Tesco CEO Sir Terry Leahy did when the company last reported its financials.

Scenario Two: That Tesco will release some "soft numbers." In other words some sort of average store sales range that offers very little in the way of specific data for industry watchers and financial analysts. Something like a current average store sales per week figure using a range such current weekly store sales of $125,000 -to- $200,000 (per-store, per-week).

By the way Fresh & Easy Buzz's most recently published sales estimate range for Tesco Fresh & Easy Neighborhood Market is $125,000 -to- $150,000 per-store, per -week. Based on our information, we believe current average sales of about $130,000 per-store per-week is about right for the 87 stores in operation.

Releasing a sales range figure -- say of $120,000 -to- $200,000 per-store per-week for Fresh & Easy -- would allow Tesco to report what are essentially true numbers (based on our range above) -- spin added of course -- and to demonsrate it is on track to achieve what was its initial target sales of $200,000 (average) in weekly store sales.

Scenario Three: we're aware of two people who've recently been told by Fresh & Easy Neighborhood market USA's corporate spokesperson that Tesco Fresh & Easy is planning to release a summary of sales to date and a few other hard numbers in October. If true, it would make no sense to do so if Tesco is releasing some hard numbers next week.

There are high expectations, particularly among a number of stock analysts who follow Tesco and have a keen interest in its U.S. Fresh & Easy food and grocery retailing venture, as there is among industry analysts in general and Tesco's competitors, that Tesco will release some meaningful hard numbers next week.

We will see what does and doesn't get released by Tesco next week when it reports its corporate numbers from comapny headquarters in the United Kingdom.

It's likely though those who are looking for a traditional report of sales, profit, loss and related hard numbers from Tesco regarding its Fresh & Easy chain in the U.S. are going to at best get a limited version in terms of hard numbers, and perhaps nothing more than a summary of Fresh & Easy operations similar to what Tesco presented when it last reported its corporate financials.

We'll learn for sure next week.