CEO's Can Say the 'Darndest Things': Wal-Mart CEO Lee Scott Says He Has Faith Tesco Will Succeed With Fresh & Easy; It's A Small-Mart World After All 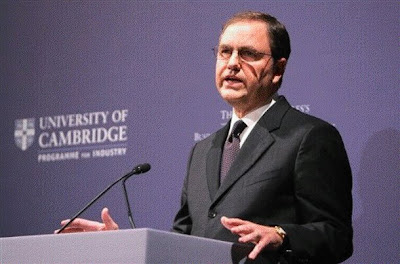 Art Linkletter, the creator and host of what arguably is considered the most successful TV show in American broadcasting history, the long-running but not around anymore Art Linkletter's House Party, decades ago wrote a best selling book (which is still in print) as a companion to his TV show. The book's title: "Kids Say the Darndest Things."

A regular feature of Art Linkletter's TV show was having a panel of kids on each episode. The host would ask the kids various questions, many of them serious in nature. And true to the book's title, those kids would indeed nearly always say the "darndest things." We are reminded of this because in the world of business, corporate CEO's sometimes say the "darndest things." That of course is in the eye of the beholder.

And Wal-Mart, Inc. CEO Lee Scott (pictured above at the top) said what many in an audience full of investors and retail industry analysts at last week's Goldman Sachs (investment bank) annual retail industry conference tell Fresh & Easy Buzz was in their view the "darndest thing." We don't think it is all that "darned" ourselves. But we'll explain that later.

During his presentation at the Goldman Sachs conference, Wal-Mart CEO Scott was asked about his thoughts on Tesco's Fresh & Easy Neighborhood Market, the United Kingdom-based global retail chain's small-format food and grocery retailing venture in the Western U.S. states of California, Nevada and Arizona, which is now up to 82 stores in only 10 months of store operations.

Answering the question, Scott said he has heard mixed reviews about how Tesco's Fresh & Easy Easy was doing, and that he wasn't paying all that much attention to it on a regular basis, two sources who attended the retail conference told Fresh & Easy Buzz.

However, he then said: "The thing that bothers me is Tesco is a very good retailer. I have a lot of faith that they will find their direction and it is something we need to pay attention to," our sources said.

Why don't we think Wal-Mart CEO Lee Scott's "endorsement" of Tesco's Fresh & Easy is saying the "darndest thing?" Because it's essentially what Fresh & Easy Buzz has been writing since last December; 'that those who rule out Tesco's overall performance as a top-notch global retailer which has the corporate ability to course correct under current CEO Sir Terry Leahy, do so at their own peril.'

Of course, just because Lee Scott is saying it doesn't mean he is right. And, just because Tesco has been a success most elsewhere in the world where it has ventured, doesn't mean it will succeed in the U.S. with Fresh & Easy. Other strong British retailers like Sainsbury's and Marks & Spencer have met their respective Waterloos in the United States after all. And finally, just because we believe Tesco has the ability to succeed over time in the U.S. with Fresh & Easy if it makes the right changes doesn't make it so either. The jury is still out, in other words.

However, just as Wal-Mart got to be the world's number one retailer through incremental steps and improvements, so too has Tesco followed a similar path in becoming the world's number three retailer, after France's Carrefour Group. Never rule Tesco out.

This is not to say Tesco doesn't have numerous problems with both its Fresh & Easy format, operations, marketing and sales, as we point out in the blog regularly.

Further, it remains our analysis that many of these problems, such as a lack of a clear retail format positioning for the Fresh & Easy stores, lack of a proper focus on local merchandising, mediocre marketing and promotion, and a few other key factors must be corrected if Tesco is to succeed with Fresh & Easy. But as we've also pointed out, there is time to fix these and other problems. It isn't even one year out since the first store opened after all. That comes in late October of this year.

The problem is thus far we've observed a less than willingness by Fresh & Easy's senior management team in the U.S. to course correct in ways that could solve many of these problems and put the retailer on a much faster course towards success. Of course, that is our analysis.

There have been some positive changes. And these changes, such as improving the interior decor in the stores, adding some additional local products and a few others, have not only improved the stores but also have impacted the stores' positively in gaining increased sales. But more is needed.

Additionally, some of the Fresh & Easy stores, such as the store in Los Angeles' Eagle Rock Neighborhood, the store in Manhattan Beach, California that opened on July 2, and a few others, are hitting the $200,000 per-week sales goal that Tesco has as its target for all the stores to be averaging for this point in time.

There also remain some very poor performing stores, such as Fresh & Easy store number one in Hemet, California, which we estimate is averaging less than $100,000 a week in gross sales, based on information form sources. There are other stores in this poor-performing category besides the Hemet store, including more than one in the Las Vegas Metropolitan market.

A stark and important reality though is that one of the key drivers of Fresh & Easy's increased sales over the last six -to- eight months has been its aggressive use of $5-off customer coupons good for what amounts to a 25%-off discount on any grocery purchase of $20 (or more). These coupons are mailed out regularly to shoppers homes and given out in multiples at the stores even when customers make small purchases.

A Fresh & Easy Buzz team member recently spend about $15 in a purchase at a Fresh & Easy grocery store and was given three of the $5-off coupons, for example. A regular reader in Las Vegas says he receives one or two of the deep discount coupons almost every time he makes a purchase at the Fresh & Easy in his neighborhood, saying sometimes he says no thanks since he usually has five or six at home at any one time.

Fresh & Easy has been distributing these coupons regularly and in an on-going way since the first stores opened last fall. Customers are used to them. Many consumers even site the deep-discount coupons as the primary reason they shop the Fresh & Easy stores.

For example, if you read Fresh & Easy store reviews on online sites such as Yelp.com or Chowhound.com (and others), you will see the $5-off coupons come up often as a prime reason reviewers say they shop the stores. We've also received numerous emails, as well as blog comments, saying the same thing. Further, we've interviewed hundreds of Fresh & Easy shoppers outside stores since last fall, and the coupons as a primary reason for shopping the Fresh & Easy markets come up often in those discussions.

Eventually the grocery chain will have to reduce the face-value of the coupons considerably or eliminate them completely. When that happens, we will see a true test of how the stores do since they are positioned as everyday low-price neighborhood markets but the deep-discount coupons are a hi-low retailer tool, serving to artificially discount the price of the products in the stores when used because the face value (25%-off on a $20 purchase) are so high.

Therefore, keep in mind our estimate of average weekly store sales for the chain of about 125,000 -to- 150,000 is based on Fresh & Easy's aggressive use of the $5-off (on purchases of $20 or more) coupons. Reduce the coupons value by say half, which is the offering Tesco gives consumers when it uses similar coupons in the UK, eliminate it completely, or merely use them infrequently as most U.S. chains would if they even used such deep-discount coupons, and it's our analysis those weekly sales averages could likely drop significantly.

Earlier this year, Tesco PLC CEO Sir Terry Leahy said publicly the company would release sales and profit/loss figures for Fresh & Easy Neighborhood Market USA for the first time, like the company does for its other international divisions, in September, 2008 when it reports its interim numbers. That September, 2008 interim sales and profit release date is just a couple weeks away. Therefore, if Tesco does release these numbers, we will be able to have a much clearer picture of Fresh & Easy's performance to date.

But Back to Wal-Mart CEO Lee Scott and his faith in Tesco's long term prospects with Fresh & Easy. Ironically, another reason wily Lee Scott didn't say the "darndest thing" is because Wal-Mart is staking lots of effort and money on a new format, Marketside, which is very similar in size (Fresh & Easy stores average 10,000 -to- 13,000 square feet, Marketside 15,000 -to- 20,000) and format to Tesco's Fresh & Easy.

Wal-Mart has only created five retail formats in its history--the original discount store, the hypermarket which became the Supercenter, Sam's wholesale Club, its 45,000 square foot Wal-Mart Neighborhood Market supermarket format, and now Marketside. The mega-retailer does not create formats out of whim. Doing so is a deliberative corporate process at Wal-Mart, especially under Lee Scott.

As we've reported and written about often in Fresh & Easy Buzz, Wal-Mart just happens to be opening its first four small-format combination basic grocery and fresh foods Marketside stores in four city's (Gilbert, Mesa, Chandler and Tempe) in the Phoenix, Arizona Metropolitan region where Tesco has Fresh & Easy stores. Not to mention these four Marketside stores are each less than two miles away from Fresh & Easy units.

So, if we were cynical, and we are not of course, we might suggest Wal-Mart CEO Lee Scott in many ways has a significant vested interest in having faith in the success of Tesco's Fresh & Easy venture--at least in the medium term.

After all, although Wal-Mart does not say so publicly, a considerable part of its strategy with Marketside is an anti-Tesco Fresh & Easy one. In other words, the world's number one retailer, which also now happens to be the number one seller of food and groceries in the U.S., thinks it can build a better small-format, convenience-oriented grocery and fresh foods "Small-Mart" than one of its two chief global competitors, Tesco, can, even though Tesco has experience doing so and Wal-mart doesn't. We will see.

But it is more than that overall. As we write frequently, Tesco PLC is a world class global retailer. It has shown the ability to course correct in places like Asia and Eastern Europe, where its stores initially were not doing well so it corporately made positive changes.

After all, its not just what Fresh & Easy Neighborhood Market USA CEO Tim Mason and his senior executive team do poorly or do well that will result in the ultimate success of Fresh & Easy. That final decision, at least as long as he remains CEO, will be up to Tesco PLC CEO Sir Terry Leahy, who has called some pretty good shots regarding Tesco's strategic growth and successes since he's been the global retailers CEO.

We can't wait to hear what Sir Terry has to say about Wal-Mart's Marketside when he has a chance to visit one of the stores in Arizona, which will start opening in just a few weeks.
Posted by Fresh & Easy Buzz at 3:32 PM