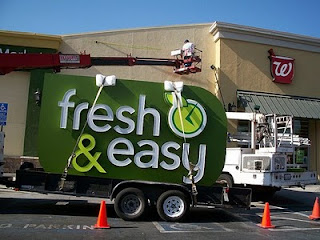 Tesco plans to have the 13 Fresh & Easy Neighborhood Market stores it's slated for closure - six in metro Phoenix, Arizona; six in metro Las Vegas, Nevada; and one in Southern California's Inland Empire region - shuttered and fully-closed by Tuesday, November 2, 2010.

The locations of the 13 closing Fresh & Easy stores are:

Tesco announced the closing of the 13 stores on October 5, as we reported in this story - October 5, 2010: Philip Clarke's Early Welcome to America: Tesco Logs $151 Million Half-Year Loss For Fresh & Easy Neighborhood Market.

Once the 13 stores are closed, Tesco will have 155 of its small-format (10,000-12,000 square-foot) Fresh & Easy fresh food and grocery markets operating in California, Nevada and Arizona, down from the current 168 units.

Below is a breakdown by market region of the 155 stores after the November 2 closures:

We have a permanent link listing the 13 stores to close at the top of the blog.

Tesco's Fresh & Easy Neighborhood Market is boarding up the 13 stores and will continue to pay the monthly rent on the units unless it can either sub-lease the units, which it has been attempting to do, or work out some sort of reduced rent arrangement with the landlords, which is unlikely.

Tesco has said it could open some or all of the stores at some point in the future. It's called the closures "mothballing," in reference to that possibility.

However, based on our reporting, along with the fact Tesco would like to sub-lease the 13 units, we doubt if once closed any of the 13 stores will fly the Fresh & Easy banner and be reopened anytime in the future.

Additionally, since Tesco couldn't make a go with the Fresh & Easy stores at the 13 locations, it's doubtful any other small-format grocer, outside of a local independent or two perhaps, or drug store chain (the buildings would be a good size drug stores) will be interested in the locations. Niche specialty type stores would seem to be the best available opportunity, considering the market and the smaller footprints of the store buildings.

Tesco currently isn't plan on opening any additional new Fresh & Easy stores this calendar year. No new units are set to open this month, and none are at present planned for November or December 2010.

The retailer opened nine Fresh & Easy Neighborhood Market stores in September of this year. See the linked stories below for details:

As we previously reported, Tesco's Fresh & Easy currently plans to open 10 new stores in Southern California in early 2011. The current opening time-frame for the stores is January 1, 2011-February 23, 2011.

Additionally, the retailer plans to open its first batch of Fresh & Easy Neighborhood Market stores in Northern California beginning in early 2011, probably starting in February but it could be March depending on a couple of variables. [See - September 22, 2010: Fresh & Easy Neighborhood Market Plans to Open Two Additional Stores in Northern California in Early 2011. Also see the related stories links at the piece.]
Posted by Fresh & Easy Buzz at 6:07 PM