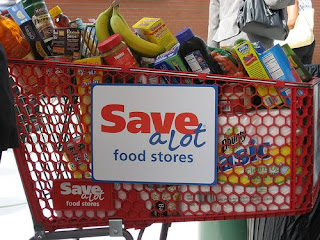 Supervalu, Inc.'s small-format, hard-discount Save-A-Lot Food Stores chain confirmed today by its significant presence at the 2010 California Grocers Association's (CGA) Strategic Conference in Las Vegas, as well as by its sponsorship activities and comments made by representatives for the retailer at the event, what Fresh & Easy Buzz has been saying for some time - it wants a healthy piece of California's food and grocery retailing pie.

The annual conference, which kicked off yesterday with registration and a golf tournament, is being held at the Mandalay Bay Resort and Casino in Las Vegas. It runs through tomorrow, October 19.

There are currently only a handful of Save-A-Lot stores in California. Those few stores are located in Southern California the Central Valley region.

But Save-A-Lot, which operates on a mixed franchise-license/corporate ownership model, is out to change that. (About 75% of the 1,200 Save-A-Lot stores in the U.S. are owned by independent operators. The remaining 25% of the stores are corporate owned.)

Last night Save-A-Lot Food Stores, which is exhibiting at the trade show portion of the conference which began this afternoon and runs through tomorrow, along with Kraft Foods, sponsored the annual opening reception (from 6 p.m.-8 p.m), which is a high profile event for the grocers, suppliers and others who attend the conference. It's also designed to be a high-profile event for the companies that provide the sponsorship, which is why those doing so, like Save-A-Lot, seek it out.

There was discussion at last night's reception, including from Save-A-Lot representatives, that the discount grocer is looking to open numerous stores in California, which is the reason it's not only exhibiting at the CGA conference and trade show but also why it sponsored and co-hosted the high-profile annual opening party: To draw attention to itself and its plans in California.

At its booth on the exhibition hall floor today, Save-A-Lot representatives were armed and ready with information, as well as being prepared to sit down and talk with grocers and others who might be interested in becoming Save-A-Lot licensees-franchisees in California.

The chain has certain regions and territories - a strategic blueprint - where it plans to open stores in the Golden State, including possibly a number of corporate-owned units, although its preference is for independent operators. It's looking for existing grocers, groups and individuals, as well as qualified business people not currently in the grocery retailing business, to become independent owner-operators of single stores and multiple groups of stores in California.

One of the representatives at the Save-A-Lot booth on the exhibit floor told a Fresh & Easy Buzz correspondent that the Supervalu, Inc.-owned chain, which operates independently, including having its own corporate headquarters in St. Louis, Missouri and its own senior executive team, led by CEO Bill Shaner, plans to open numerous stores in California over the next five years.

This tracks with Supervalu CEO Craig Herkert's plans to double the number of Sav-A-Lot stores in the U.S., from the current about 1,200 to about 2,400, over the next five years, which is something we've previously reported on and written about in Fresh & Easy Buzz. [See - April 20, 2010: CEO: Supervalu to Open 100 New Sav-A-Lot Stores This Year; Strategy to Double Store-Count to 2,400 in 5 Years in Place.]

Supervalu, Inc. has a significant presence in Southern California through its ownership of the Albertsons supermarket chain (number three market share after Kroger's Ralphs and Safeway's Vons). It also owns the upscale Bristol Farms chain in the region.

However, with the exception of a couple Save-A-Lot stores in the southern Central Valley and one Bristol Farms supermarket in San Francisco, Supervalu has no presence in Northern California or the Central Valley region, where about 35-40% of California's nearly 40 million residents live. Save-A-Lot would be Supervalu's best food and grocery retailing vehicle overall, among the numerous formats it has, to reverse that, in our analysis. Not everywhere, but in the right markets.

Additionally, with only a couple Save-A-Lot units in Southern California, the vast region where the remaining about 60% of Californians live is wide open for the small-format, hard discount grocer.

As a matter of fact, the entire Western U.S. (and much of the Midwest) is wide open for Supervalu when it comes to opening Sav-A-Lot food and grocery stores.

Take a look at the map here, it tells the story graphically very well. Notice that all the colored dots on the map, which represent Save-A-Lot stores, are in the Mid-Atlantic, eastern and some Midwestern portions of the U.S., while there's virtually no stores west of the Rocky Mountains. And since Save-A-Lot is headquartered in St. Louis, which happens to be called "The Gateway to the West," coming west is the logical next move. It's also logical since Supervalu plans to double the number of Save-A-Lot units between now and 2015. The vast west is vastly empty of Save-A-Lot stores.

California doesn't have a small-format, limited assortment, hard-discount grocery chain on the order of Save-A-Lot or Aldi USA, which has all of its current 1,000-plus U.S. stores east of the Rocky Mountains, as a major player in the state. Aldi USA has come as far west as Texas thus far. The two are the leading chains of the format in the U.S.

The current state of the California economy, which includes having the third-highest jobless rate (12.5%) among the 50 states, should offer a warm climate for hard-discount Save-A-Lot in the state.

Additionally, there are numerous vacant retail stores available at extremely favorable lease rates in the California, from the south to the north and everywhere in between. This abundance of properties at favorable rates, which is going to be the case from a number of additional years in the state, offers what likely will be a once in a decade opportunity for a chain like Save-A-Lot, and independent franchise owners, to grab numerous locations at extremely advantageous monthly rent amounts and long-term lease rates.

The one key limiting factor for Save-A-Lot in California at present is that because of the less than stellar economy and ongoing depressed residential and commercial real estate markets, it could be difficult to get more than a few independent owner/operators to become Save-A-Lot licensees-franchisees in the Golden State because access to capital is still rather limited, although it is improving somewhat.

Despite this economic and capital situation though, fast-growing Berkeley, California-based salvage and discount grocery chain Grocery Outlet, which operates on a licensing-franchise system similar to Save-A-Lot's, has been finding independent operators left and right in California and elsewhere in the west, where it's been opening one or more new stores about every other month since last year. Most of the new stores opening have been in California. Grocery Outlet plans to double its about 130 store count over the next few years.

One solution to this potential problem would be to build and open numerous corporate-owned Save-A-Lot stores and then franchise them out to independent owners as the franchisees become available. Convenience store chain 7-Eleven has and is doing this with considerable success in California, for example.

Another possibility is to get established, privately-held California grocery chains to become franchisees. This is something grocery wholesalers have done with much success in the state with the Food For Less discount grocery store format, for example.

There are a number of privately-held chains, such as Woodland, California-based Nugget Markets, that own and operate multiple Food For Less stores, which comprise a part or all of the retailer's chain. Nugget, which was founded in 1926 and remains owned by the Stille family, operates both the Food for Less discount stores and its upscale Nugget Markets.

The annual CGA conference and trade show, which has the theme of "Express Lane to Success" this year, runs through tomorrow.

The annual event, which is sponsored financially by food, grocery and related companies that sell to and do business with the state's chain and independent grocers (collectively known as the trade), and related trade show is a key networking event for grocers doing business in California, their suppliers and service providers.

The networking takes place at formal events like the Sunday golf tournament, the opening reception hosted by Save-A-Lot and Kraft Foods mentioned earlier, and other social events hosted by The Illuminators, which is an organization comprised of members of the California grocery trade.

But the networking, which representatives of Supervalu's Save-A-Lot are doing some of right now in Las Vegas, also happens, and frequently in more interesting and productive ways, at informal venues like the golf course, restaurants, hospitality suites set up by suppliers and food brokerage firms, casino bars and gaming tables, and other Vegas hot spots.

Tesco's Fresh & Easy Neighborhood Market is a member of the California Grocers Association, as are all of the leading chains in California - Kroger's Ralphs, Safeway Stores, Albertsons, Stater Bros, Save Mart, Raleys and others - and most key independents.

April 29, 2010: Heard on the Street: There's Something About Albertsons ... In Southern California

September 3, 2010: How the California Grocers Association and its Members Can Snatch Victory From the Jaws of the Defeat of California's Plastic Bag Ban
Posted by Fresh & Easy Buzz at 9:27 PM