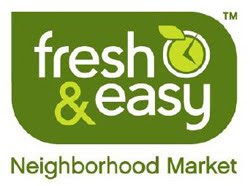 Halloween is a holiday that employers and employees can and do celebrate in a number of fun and creative "out of the box" ways in the workplace.

For example, there's the employee Halloween costume contest, which can include office "trick or treating," although one has to be careful about the trick part, since everybody has to work together once Halloween is over. Plus, HR likes to keep a close eye on those tricks.
And of course there's what just might just be the most creative Halloween workplace event of all - the pumpkin or Jack O' lantern carving contest, which allows employees or teams of employees to test their creative juices by designing something from a blank slate - a pumpkin or a gourd. Along with being a creative exercise this "out of the gourd" Halloween tradition is also a good team-building - not to mention fun - exercise.
It was just this festive Halloween-themed event, a pumpkin carving contest - the "Fresh & Easy Great Pumpkin Carve-Off," to be precise - that employees who work at Fresh & Easy Neighborhood Market's corporate headquarters office in El Segundo, California engaged in last week, as a lead up to Halloween today.
The employees broke up into numerous teams for the contest. The judges named one first-prize winning team, and four employee teams received runner up honors. All the pumpkins are very creative pieces of work. Since pictures most often speak louder - and in this particular case better - than words, we present the winners below. 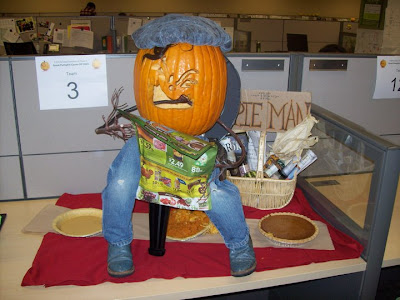 "The Pie Man" (above), who by all indications looks to be a Fresh & Easy Neighborhood Market shopper and follows the grocer's weekly advertising circular closely, took first place in the pumpkin carve-off contest. It looks like it was a solid (as opposed to custard) team effort. 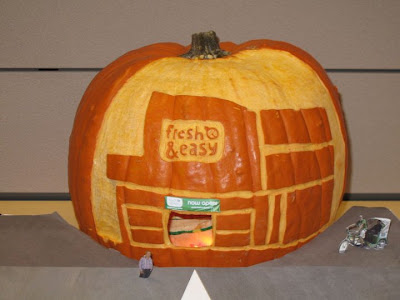 This Fresh & Easy Neighborhood Market headquarters office employee team transformed its pumpkin into a Fresh & Easy fresh food and grocery store, complete with the green "Now Open" sign above the entrance. We aren't sure who the man in front is - perhaps the store manager? But the three-wheel bicycle heading to the "store" is a version of a real three-wheeler Fresh & Easy uses as part of its "green" retailing marketing and promotion. 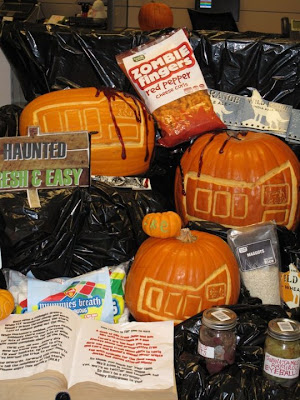 Similar to the team above, this employee team used its pumpkins (the only team of the five using more than one) as a canvas on which to etch facsimiles of Fresh & easy grocery stores. But as you can see, this team added some mock fresh&easy private brand products as a way to play up its "Haunted Fresh & Easy" store theme. We're betting there were at least a couple Fresh & Easy Neighborhood Market buyers/merchandisers on this team, hence the product inclusions. 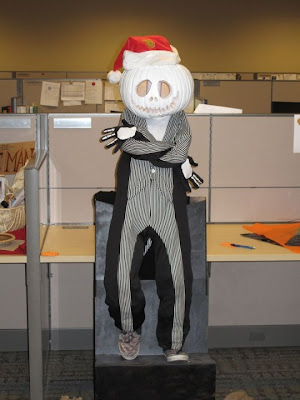 Our first thought when we saw this photograph was that an executive from Tesco's global headquarters in the United Kingdom was paying a visit to Fresh & Easy's corporate office in El Segundo. The suit does have a Savile Row look to it after all. But on second look we determined it's more likely the "Ghost of Halloween and Christmas Past," based on the combination of the white pumpkin for his head and the Santa hat on top. This team was doing some real "out of the gourd" thinking. 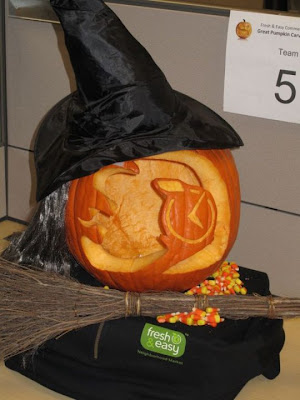 This Fresh & Easy employee team incorporated Fresh & Easy's signature clock logo in its witch-themed design. We wonder if they were shooting for a vote from Tesco director and Fresh & Easy Neighborhood Market CEO Tim Mason, who it's said is a huge fan of the clock logo.
Posted by Fresh & Easy Buzz at 12:33 AM

I think the first place winner deserved it. Could he be Simple Simon The Pieman, by the way? As in marketing. But I like the Fresh & Easy store pumpkin as well. Not as creative or elaborate but they did an excellent job carving it.