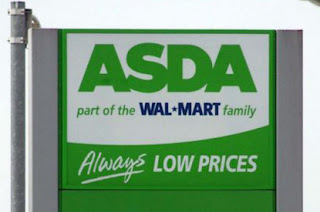 Walmart Stores, Inc.'s ASDA grocery and general merchandise chain just won the 'Best National Retailer' in the United Kingdom (UK) award at the 2010 World Food Awards, which is currently going on at the tony Hilton Park Lane Hotel in London.

ASDA defeated Tesco and Sainsbury's for the honor at the annual awards ceremony, which some people like to call the 'Oscars' of British and European food industries.

The awards ceremony focuses on "the best" ethnic (or world) foods available for sale in the United Kingdom and Europe, along with honoring what the judges determine is "the best" food retailer in the UK.

ASDA is the second-largest food and general merchandise retailer in the UK. Tesco is number one. Sainsbury's is the third-largest, just slightly behind ASDA in market share.

Tonight's event is being broadcast globally in over 100 countries by Sony Entertainment Television. In addition to the various awards presented by various celebrities, sports personalities and chefs, the awards ceremony includes performances by a host of musical artists.

In addition to the 'Best National Retailer Award' won by Walmart-owned ASDA, the award's ceremony includes numerous other categories, all focused on various aspects of food retailing, distribution and restaurants.

You can learn more about the World Food Awards at the website here.