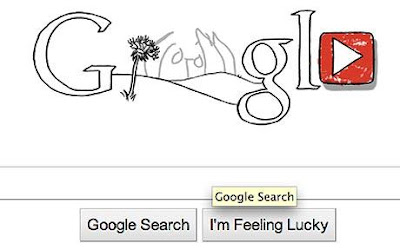 Above is Google's 'Google Doodle' of John Lennon, in honor of his 70th birthday, which is tomorrow. You can listen to a 32-second track of John Lennon's song 'Imagine' and watch the morphing 'Doodle' at Google's home page. Click here to listen to the song in its entirety. You can get the song's lyrics here.

The Insider: Heard on the Street

Had he not been shot dead on a brisk December 8, 1980 night by Mark David Chapman outside the Dakota, the Manhattan apartment building in New York City where he and his wife Yoko Ono lived, the musician, singer, songwriter and peace activist John Lennon, one of the United Kingdom's greatest exports, would have been celebrating his 70th birthday tomorrow, Saturday, October 9.

One of Lennon's most moving and popular songs is "Imagine." The song became and remains extremely popular in the United States and throughout the world in large part because in many ways it was a theme song for how John Lennon, a man with plenty of psychological and emotional warts, like the rest of us, lived his life - imagining. In the song he asks us to imagine a different, more peaceful and harmonious world.

Born in a lower-income neighborhood in working class Liverpool, England on October 9, 1940, it was John Lennon's strong imagination - along with plenty of hard work and some good old fashion luck - for a better life that led him to become one of the most talented song writers and musicians of all time, first as one of the four Beatles and later after they split as a successful solo singer/song writer.

Today Google, the Mountain View, California-based company hatched in the minds and founded in 1998 by two Stanford University graduate students, Larry Page and Sergey Brin, and which through hard work and millions of mega-bites of imagination has become an iconic global company in a mere 12 years, is celebrating John Lennon's birthday and his imagination by replacing its famous logo on the Google home page with an artist's sketch (a 'Google Doodle') of the Liverpool-born musician. Clicking on the 'Google Doodle' of Lennon plays the 32-second track.

Perhaps there's some imagination-inducing chemical in the water in Liverpool?

Tesco CEO Terry Leahy, who chose a very different career path than did fellow Liverpudlian John Lennon, has used his imagination to a considerable degree in developing and implementing a vision for Tesco over the 14 years he's been CEO. (Click here for a quick lesson in Liverpool dialect.)

That imagination included a vision to make Tesco the number one retailer of food and general merchandise in the United Kingdom, which it wasn't when Leahy took over but is today.

Leahy also imagined Tesco as a global retailer, with stores in Eastern Europe, Asia and the United States, which it wasn't when he took over but is today.

Terry Leahy - Sir Terry, as he's often called - was even given that title by the Queen, in part for his retailing imagination.

That brings me to the third son of Liverpool, incoming Tesco CEO Philip Clarke.

I suggest Philip Clarke call on that Liverpudlian imagination when he takes the CEO reins from Leahy in March of next year, when it comes to Tesco's fledgling Fresh & Easy Neighborhood Market fresh food and grocery retailing venture in the United States.

He needs to 'imagine there's no sacred cows' - human, operational or programatic - when it comes to Fresh & Easy.

Clarke should imagine Fresh & Easy is a true California start up business in the best Silicon Valley definition of that term rather than it merely being a colonial grocery retailing outpost that flies under the mighty Tesco flag.

The CEO-to-be needs to imagine on a larger canvass when it comes to Fresh & Easy Neighborhood Market. The United States is a huge country. After all that's one reason (territory) the British fought so hard to keep it. It's geography goes far beyond California, Nevada and Arizona, for example.

Philip Clarke also needs to, in the words of John Lennon: "Imagine all the people." In this case - grocery shoppers. Americans aren't one size fits all. Some like self-service checkout, for example. But most want to be waited on, (or at least be offered the option) by a clerk rather than scan and bag their own grocery purchases, particularly after working an eight hour day. No dice at Fresh & Easy, it's all self-service, although the great store clerks with assist if asked. But about us Americans - we hate to ask.

Most American grocery shoppers also like the choice between a free paper grocery sack or a plastic carrier bag to hold their purchases. But it's free plastic carrier bags only at Fresh & Easy. After all, long gone are the days of Henry Ford, who said prior to the introduction of his first automobile that Americans could have it in any color they wanted - as long as it was black.

We should all be using reusable shopping bags - but it just ain't reality. So, to paraphrase Patrick Henry of, "Give me liberty, or give me death" fame: 'Give me a choice between paper or plastic, or I'll go to Safeway.'

Many U.S. shoppers also like to pay for their groceries with a paper check if they so choose, something that's taboo at Fresh & Easy. And many like to cash their paychecks (or government checks) at the grocery store, then use a healthy chunk of the cash to buy groceries after. Can't do it at Tesco's Fresh & Easy.

For example, a good place to start would be by visiting stores operated by: Wegmans on the east coast; H-E-B in Texas; Fry's in Arizona and the numerous Latino format grocers in the state; Ralphs and Vons and others in Southern California; Whole Foods; Aldi USA; Trader Joe's; Costco; Walmart; Target's P-fresh markets inside its discount stores; Safeway; Raley's; Andronico's and others in Northern California.

What Clarke will see is that like the American people, who are a mosaic of sized, shapes, ethnic backgrounds and more, its grocery stores are a mosaic of formats - big, small, upscale, discount and various combinations of all of the above. And if his imagination is in high Liverpudlian gear, he might have a revelation. That revelation: One possible key to success for Tesco in the U.S. might be to become a multi-format food and grocery retailer.

In my June 12, 2010 column - Will Phil Clarke Shake Things up at Fresh & Easy Neighborhood Market USA When He Becomes Tesco CEO in 2011? - I used a question as its title as a rhetorical device to suggest Clarke would and should "shake things up" at Fresh & Easy. Between then and now Clarke has shaken things up a little bit. As incoming CEO he's already been working closely with CEO Terry Leahy as part of Tesco's extensive succession planning process.

Among the slight "shaking up" Clarke's done over the last couple months has been to ask fellow Tesco board member and Fresh & Easy Neighborhood Market CEO Tim Mason, who in March will get the title of co-CEO (Clarke will run the company though), for a plan going forward for Fresh & Easy.

Based on Tesco's announcement on Tuesday that its closing 13 under-performing Fresh & Easy stores - six each in metro Phoenix, Arizona and metro Las Vegas, Nevada and one in Southern California - that it plans to have 400 Fresh & Easy stores by the end of its 2012/13 fiscal year, and that it also plans to break-even by then, along with comments made by Clarke, it appears Tim Mason has come up with a plan that has satisfied Philip Clarke. [See - October 5, 2010: Philip Clarke's Early Welcome to America: Tesco Logs $151 Million Half-Year Loss For Fresh & Easy Neighborhood Market.]

Soon-to-be Tesco CEO Philip Clarke said this about the going forward plan for Fresh & Easy on Tuesday: "There's no need to carry out some big strategic review," he said today. "It's clear that continuing, and moving toward profitability, is the right thing."

However, while it is a plan, and with some positive elements, it's an incomplete one, in my analysis and opinion. The work - and imagining - when it comes to Fresh & Easy is far from done. As such, it would be a shame if Philip Clarke doesn't take a cue from fellow Liverpool lad John Lennon and continue to imagine, when it comes to Tesco's American Fresh & Easy venture

[Columnist's Note: John Lennon's song 'Imagine" has a meaning much larger than commerce. It's not my intent in the column to conflate the meaning of his song with commerce in general or Tesco specifically, although John Lennon, who later became a global peace activist, did well commercially and wasn't ashamed of it, nor should he have been. Rather, it's to suggest to one son of Liverpool that he might take a page from the imagination of another son of that city when it comes to his chosen profession. Happy birthday to a global icon, John Lennon]

The Insider - June 12, 2010: Will Phil Clarke Shake Things up at Fresh & Easy Neighborhood Market USA When He Becomes Tesco CEO in 2011?

Recent Columns by 'The Insider'

~September 3, 2010: How the California Grocers Association and its Members Can Snatch Victory From the Jaws of the Defeat of California's Plastic Bag Ban