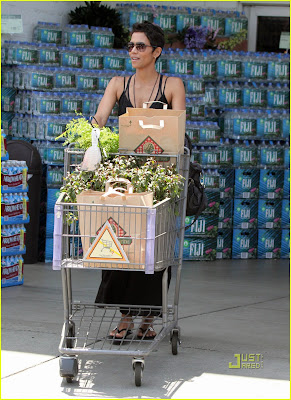 Actress Halle Berry, who's a regular customer at the Hollywood, California Bristol Farms store at 7880 West Sunset Boulevard, will likely be happy to learn the upscale grocery chain isn't going away and is now back in local control. The photo of the casually dressed actress leaving the store was taken on June 3, 2010 by Hollywood celebrity blogger JustJared.com. You can see the Bristol Farms logo on the grocery bags in her cart. Ms. Berry appears to be a paper and not plastic (or reusable) user when it comes to her grocery bag of choice. Based on the contents of her shopping cart, Halle Berry also appears to be a good customer for the upscale grocer when it comes to the house plant category.

On July 22, 2010 we tweeted the following (reproduced in italics below) to Natalie Berg, an analyst with London-based retail research firm Planet Retail. The Tweet: @Natalie_Berg: Keep it under your beret: There is some talk about a possible senior exec w/investor or a grocery wholesaler participation buyout of BF (Bristol Farms) 3:09 PM Jul 22nd]

Our Tweet was in response to one Ms. Berg, who covers both the UK and U.S. retailing scenes for Planet Retail (and who offers insightful Tweets), posted on July 13, in which she wrote: "@Natalie_Berg Just updated SuperValu forecasts. Bristol Farms now classified as "other" and they are quietly selling off stores. Do I smell a divestment? 8:23 AM Jul 13th."

Then Supervalu, Inc.-owned Bristol Farms didn't sell any stores in 2010 but it has closed four stores in Southern California since it acquired the chain in 2006 from then Boise, Idaho-based Albertsons Inc. Those stores were located in Valencia, Woodland Hills, Redondo Beach and Mission Viejo.

Today Supervalu, Inc. announced it has sold the upscale 14-store Bristol Farms division to chairman, president and CEO Kevin Davis and a group comprised of 17 other executives and management members, who've acquired the division in partnership with private equity firm Endeavour Capital, which takes its name from the H.M.S. Endeavour, the ship that was piloted by noted explorer James Cook. Endeavor Capital has offices in Portland, Oregon, Seattle, Washington and Los Angeles. The new ownership team takes over today, Supervalu said.

Bristol Farms has also operated independently from Supervalu in terms of its procurement, continuing its previous policy of buying from Southern California-based retailer-owned cooperative grocery wholesaler Unified Grocers. Under its new ownership, Bristol Farms' CEO Davis says it will continue its long relationship with Unified, which he has been a board member of in the past.

Davis, along with Bristol Farms' executive vice president Sam Masterson and the 16 other employees will own a percentage of the specialty grocery chain along with Endeavour Capital, which has a track record of investing in grocery chains like Idaho-based WinCo Foods, Oregon-based New Seasons Market and others. [The private equity firm's investment portfolio is a varied one. You can view the companies it's invested in here.]

Kevin Davis has been with Bristol Farms, which was founded by partners Irv Gronsky and Mike Burbank with a single store in Rolling Hills, California in 1982, for 14-years. Early in his career at Bristol Farms Davis was the head-buyer/merchandiser for the upscale Southern California grocery chain, which is a pioneer in specialty grocery retailing not only in Southern California but nationally.

Davis has an extensive background in the food retailing business in Southern California, including working as a store manager, district manager, corporate vice president of sales and advertising and senior vice president of marketing at Ralphs, which is the largest grocery chain in the region. He first went to work as a grocery clerk for Ralphs in 1974.

When Supervalu, Inc. obtained Bristol Farms in the Albertsons Inc. acquisition, it too talked about expanding the upscale chain, both in terms of opening new stores in Southern California and in Northern California and potentially expanding geographically. That never happened either under its ownership. From 2006-2010 three former Southern California Albertsons units - in the Westchester neighborhood in Los Angeles, Palm Desert and La Jolla - were converted to Bristol Farms stores, and a new store in Valencia was opened in November 2008, but that's about it in terms of expansion. The Valencia store was closed in late February of this year due to poor performance

At its high point, Bristol Farms operated 17 stores under the banner of the same name. The closing of the four stores - Valencia, Woodland Hills, Redondo Beach and Mission Viejo - brought the store count down to the current 13 Bristol Farms units.

Being free from Supervalu's corporate ownership should allow Kevin Davis and company to get back to what Bristol Farms historically has done well: Innovative specialty food retailing with an independent grocer's local touch. The Bristol Farms stores offer a full-selection of basic food and grocery items but put a major focus on specialty, gourmet and natural food and grocery offerings across all categories, including fresh-prepared foods.

With its backing from Endeavour Capital we also expect to see Bristol Farms' selectively open new stores in a measured way, primarily in Southern California but perhaps out of the region as well. For example, Davis has long been interested in Northern California. And with just one store in the region, in San Francisco, there's certainly plenty of room to grow, particularly in the San Francisco Bay Area where Bristol Farms' brand of upscale specialty food retailing has a following in selected, higher-income communities and neighborhoods.

Additionally, with only the one unit in the Bay Area, it's difficult to do much in the way of cost-effective marketing and merchandising since the economies of scale aren't there for Bristol Farms with just the single-store in San Francisco.

Over the years there's been talk about closing the San Francisco unit. However that's not happened. This fact offers another good reason why it could make logical sense for the "new" Bristol Farms to look north for future stores.

Unified Grocers, Bristol Farms' supplier, also has a division in Northern California, which supplies the one store in San Francisco. As such, supplying additional stores in the region would pose no problem and would be seamless.

In fact, Unified Grocers is breathing much relief that Davis and company has acquired Bristol Farms, which means the wholesaler will be able to continue to supply the 14 stores, which provides a healthy amount of revenue for the retailer-owned wholesale grocer. For example, had Supervalu sold Bristol Farms to a self-distributing chain instead of the employee group and Endeavour Capital, that would likely have ended the supply agreement with Unified, or at least limited it.

We know this to be true because over the summer our sources - the same ones that informed our July 22, 2010 Tweet to Ms. Berg - told us Unified was considering investing with Davis and the other Bristol Farms executives if doing so was required to keep the chain independent. Having once owned Bristol Farms as part of a then move to own and operate retail grocery stores along with being a wholesaler, Unified wasn't crazy about doing so, but was considering it. However, with the backing of Endeavour Capital, such a move wasn't needed.

Look for a new round of interesting food and grocery retailing to come from the "new" Bristol Farms.

First off though the new owners have some top and bottom line concerns to address, as the recession has hurt sales at the upscale chain as many of Bristol Farms core customers have been trading down to more mid and lower-priced grocers like Kroger's Ralphs and Safeway's Vons, along with others.

Additionally, the competition in the upscale and specialty niche in Southern California has and is only getting more competitive. Whole Foods Market and Trader Joe's, for example, continue to add stores in the region. And hybrid niche players like Sprouts Farmers Market, Henry's Farmers Market and Tesco's Fresh & Easy continue to open numerous new stores throughout Southern California, including in cities where the 12 Bristol Farms stores are located.

Davis and his team are creative and innovative grocers though. As owner-executives who now have a personal financial interest in Bristol Farms' success and growth, coupled with Endeavour Capital as an investment partner, which understands the grocery retailing business because of its track record in the industry, and freed from being a step-child of Supervalu, Inc., things should be looking nowhere but up for Bristol Farms in the months and years to come.

And thanks in part to Twitter and Ms. Berg - but particularly to our sources - we pretty much had the acquisition deal story nailed over three months ago in our July 22, 2010 Tweet.

April 29, 2010: Heard on the Street: There's Something About Albertsons ... In Southern California

>In the April 29 piece linked above our 'The Insider' columnist offered a strategy for Supervalu, Inc. in Southern California. He also noted a possible sale of Bristol Farms.

>In our October 18 story linked above we reported on and detailed Supervalu's push with its small-format Save-A-Lot chain in California. Cash from the sale of Bristol Farms will help fund that strategy.

>'The Insider' also mentions Bristol Farms in his June 27 column linked above. By the way, he says a Tesco acquisition of Supervalu, Inc. isn't in the cards at present. He will have an upcoming column on the topic soon.
Posted by Fresh & Easy Buzz at 12:27 PM