Mr. [Tesco] Three Percent Warren Buffett Still Has That 'Oracle' About Him 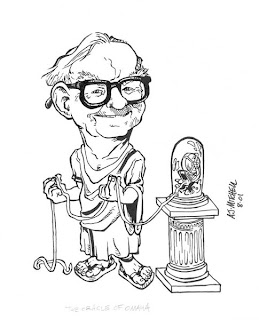 Apparently Warren Buffett, also known as 'The Oracle of Omaha,' still has influence with the global investor class, despite the more than a few investment stumbles he's made over the last couple years. He mentions some of those stumbles in his just-out Berkshire Hathaway Inc. letter to shareholders here.

On Monday we wrote about 'The Oracle of Omaha' upping his investment in United Kingdom-based Tesco, the parent company of Fresh & Easy USA, to a 3% overall ownership stake in the global food, grocery and general merchandise retailer.

Buffett disclosed his increased investment in Tesco in his annual Berkshire Hathaway Inc. letter to shareholders, as we discussed in our story. [March 1, 2010: Warren Buffett, 'The Oracle of Omaha,' Wants you to shop at Tesco...But He Doesn't Mind if You Shop at Walmart]

Buffett - who trades off every couple years with his pal Bill Gates as either the richest or the second-richest person in the world in Forbes annual list - is now the sixth-biggest Tesco shareholder, according to our research.

On Monday (and through Tuesday) when the media reported Buffett's now 3% stake in Tesco, the retailer's stock soared by about 3.5%, its highest gain since May 2009.

Tesco's stock dropped a bit at the end of business today, which could be expected after the Monday and Tuesday run up.

Stock analysts on Wall Street and in London are attributing the significant gain in Tesco stock on Monday (the first day of trading after Buffett's Saturday disclosure) and Tuesday virtually 100% to Buffett's increased ownership stake.

[Illustration credit: The ink-on-paper illustration of Warren Buffett at the top, titled 'The Oracle of Omaha," is by artist Andrew Mitchell. You can learn more about his work at his site here.]

A counter arguement could be made in that in all likelyhood Buffett paid up to 400p and possibly a little over when he acquired his original stake in 2006. Given the growth in equity over the last 3 years the share price could still look cheap at say 440p ( a 10% premium over the maximum price that Buffett paid in 2006 ).

Another interesting thing is that Buffett's stake is technically 2.99%. We rounded it in the piece. As you probably know, a 3% or higher stake in the UK requires public disclosure. Was never one on Buffett's stake.