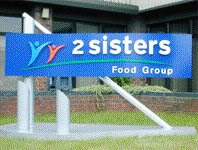 The United Food & Commercial Workers (UFCW) union has charged Tesco Fresh & Easy Neighborhood Market's fresh, prepared foods supplier 2 Sisters Food Group with unfair labor relations practices in the U.S., reporting the company to the U.S. Labor Relations Board for what the union says is the unfair firing of six of the firm's employees for attending a union recruitment meeting, along with filing complaints against their managers at the company.

Tesco essentially brought United Kingdom-based 2 Sisters Food Group with it from the UK to Southern California USA (where Fresh & Easy is headquartered) to be its supplier of ready-to-eat and ready-to-heat fresh, prepared foods in its current 74 (and rapidly growing) small-format combination fresh foods and basic grocery Fresh & Easy stores.

In a statement, Emily Stewart who is one of the leaders of the UFCW union's campaign to bring Tesco to the table and meet with and discuss the unionization of Fresh & Easy Neighborhood Market store-level workers, said: "We have uncovered evidence that workers are being harassed and intimidated by 2 Sisters management to deter union activity, in clear contravention of US labor laws."

The U.S. Department of Labor has a process in which company employees, unions and others can report firms such as 2 Sisters Food Group to its labor relations board for investigation. Companies reported have the right to offer their side of the story as well. In the last 8 years however under the administration of President George W. Bush, the U.S. Department of Labor and its Labor Relations Board has investigated far fewer reports like the one by the UFCW of 2 Sisters than it has under past Presidential administrations, like the Clinton Administration in the 1990's.

UK-based 2 Sisters Food Group was only founded just 15 years ago in 1993 but has rapidly grown into a company that has 13 plants in the UK, one in Holland and one in the U.S. According to its website, it currently employees over 5,500 people internationally and has annual sales of ~650 million-p (British Pounds).

At press time, 2 Sisters Food Group hasn't issued a statement regarding the UFCW's claims and its reporting of the company to the labor board for what it says are the unfair firings of the six company employees.

The reporting of Tesco Fresh & Easy's prepared foods supplier, which like Tesco's Fresh & Easy is a non-union company, appears to be the latest and newest element on the UFCW's multi-front campaign designed to get Tesco executives to meet with union leaders to discuss unionizing Fresh & Easy Neighborhood Market employees.

That campaign by the UFCW, both in the U.S. and in the United Kingdom, includes leafleting neighborhoods where Tesco has existing and is opening new Fresh & Easy grocery stores with anti-Fresh & Easy flyers, demonstrating and picketing in front of the stores, conducting a political lobbying and media campaign in the U.S. and the UK, and getting the support of Democratic Party nominee for U.S. President Barack Obama, who has written two letters to Tesco CEO Sir Terry Leahy asking him to have company representatives meet with UFCW leaders.

Thus far the UFCW campaign hasn't budged Tesco. Tesco CEO Leahy and Tim Mason, CEO of Tesco's Fresh & Easy Neighborhood Market USA, both say the company has no plans to meet with UFCW representatives and sees no reason to do so. Further, Tesco says the union is free to organize Fresh & Easy store-level employees in accordance with existing U.S. labor laws, stating that it is up to the workers as to if they want to join the union or not.

Tesco is not required by U.S. labor law to meet with the union's representatives. Doing so is voluntary.

Meanwhile, Fresh & Easy Buzz has learned the UFCW union's Tesco campaign has been the topic of discussion among various union and political types at the current Democratic Party National Convention in Denver, Colorado.

The UFCW and every other U.S. labor union is supporting U.S. Senator Barack Obama for President against presumptive Republican Party nominee Senator John McCain. Senator Obama officially received his party's nomination for President earlier today in Denver. He will give his acceptance speech tomorrow night in Denver to a crowd expected to number 70,000 -to- 75,000.

America's labor unions, including the UFCW, are mobilizing tens of thousands of union members to conduct a nationwide grass roots campaign between now and November to help get Senator Obama elected President. The unions also are among the leading financial donors to the Obama campaign.

Organized labor is banking on an Obama victory in November to open the door to be able to increase union membership, which is at an all time low in the U.S.

Senator Obama supports the Employee Free Choice Act, a piece of legislation currently before the U.S. Congress. Organized labor is the major sponsor of this measure and has built a coalition in Congress in support of the measure.

It's the last aspect of the legislation, allowing employees to merely sign cards authorizing union representation rather than using the current secret ballot system, that not only is the most controversial part of the proposed legislation but the one getting the most objection by corporate America.

You can read the entire text of the Employee Free Choice Act legislative bill here, along with reading some related information about its supporters and other issues surrounding the proposed legislation.

If passed, the legislation will make it much easier for unions and employees to choose union representation where they work. Rather than go through the current secret ballot voting process which requires numerous steps before an actual secret ballot vote can be taken, unions and workers would have a much easier time because the act would allow employees to fill out a simple card saying yes or no to being represented by a union. If a majority says yes, union representation can go forward essentially.

What we've learned is that a number of labor unions have informally discussed supporting the UFCW more aggressively in its campaign to bring Tesco to the table to discuss the unionization of Fresh & Easy while meeting in Denver at the Democratic National Convention.

By no means is it at or even near the top of organized labor's agenda. Getting Barack Obama elected President is the number one objective and focus. However, since so many representatives of U.S. organized labor are attending the Denver convention, they're using the opportunity to discuss numerous issues and strategies, which is how the Tesco Fresh & Easy discussions have come up, Fresh & Easy Buzz has learned.

The next step in terms of the UFCW union's reporting of Tesco Fresh & Easy's prepared foods supplier 2 Sisters Food Group to the labor board is to await the response by the board as to if they will investigate the union's allegations that the six employees were unfairly fired for attending a union organizing meeting and for reporting managers regarding labor issues. It is against U.S. labor law to fire an employee for attending a union organizing meeting.

The issue is likely to turn up the heat on Tesco regarding the union issue with its U.S. Fresh & Easy grocery chain. Tesco, which is based in the UK and is that nation's leading retailer along with being the third largest retailer in the world, has union representation in its UK stores as well as being affiliated with unions in nearly every other region it does business internationally except for the U.S.

Tesco's Fresh & Easy Neighborhood Market is far from the only major food and grocery retail chain in California, Nevada and Arizona, where its current 74 stores are located, that's non-union. Major non-union chains in these three states include Wal-Mart, which is the world's largest retailer and the number one seller of food and groceries in the U.S., Whole Foods Market, Inc., specialty grocery chain Trader Joe's, Target, which operates Super Target combination food and general merchandise stores, and three smaller but fast-growing natural foods chains: Sprouts Farmers Market, Sunflower Farmers Market and Henry's Marketplace.

Tesco though has been very cool regarding the UFCW campaign thus far. It's senior executives seldom if every comment on the union publicly in the U.S. or in the UK. Additionally, neither Tesco PLC or its Tesco Fresh & Easy USA division has launched a public relations campaign to counter the union, preferring to simply repeat its statement that it is up to the retailer's store-level employees to choose if they want or don't want to join the union.