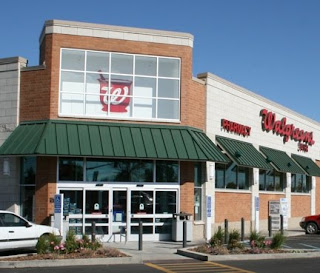 Connecting the Dots - And More

In the January 6 story we also reported that Mr. Jensen had left his position at Fresh & Easy to take a job with the Walgreens drug chain at its corporate headquarters in Deerfield, Illinois.

In our reporting for the January 6, 2010 story, we had information that Jim Jensen was not only leaving Tesco's Fresh & Easy to join Walgreens but that he is taking a new position at the drug chain - director of fresh foods.

However, we didn't have enough source confirmation on that particular aspect of the story to go with it in print, based on our source and fact checking criteria - so we left it out, even though we believed it to be the case based on the information we obtained.

But today Bloomberg reporter-writer Carol Wolf helps us - and the ongoing story - out a bit.

In an interview piece today, she quotes Walgreens' vice president Brian Pugh from a January 11 interview she had with him (just five days after our Jim Jensen story was published) as announcing publicly that Walgreen Co. is going into the fresh foods merchandising business.

Here's what is reported in the piece today (in italics) from the January 11, 2010 phone interview with Brian Pugh:

Walgreen Co. plans to offer fresh foods and prepared meals to draw “time-starved” shoppers to its more than 7,000 stores, taking on retailers such as Target Corp. and Kroger Co. The drugstore chain has been talking with foodmakers including Unilever NV , Nestle SA and Sara Lee Corp. about creating private-label and branded products, said Bryan Pugh , vice president of merchandising.

“Everyone is time-starved and we have the most convenient 7,000 locations in the U.S.,” Pugh said in a Jan. 11 telephone interview. “They’re on-the-way-home destinations that are easy to get in and out of and will provide a good value.” He declined to say when the project will be implemented or how much it costs.

Walgreen, based in Deerfield, Illinois, must sort out supply and distribution issues and test in some markets before introducing freshly prepared foods such as salads, cut fruits, ready-to-bake pizzas and sandwiches into more stores, he said. The goal of the program, along with the sale of beer and private-label wine, is to boost revenue , Pugh said.

[You can read the entire Bloomberg piece here.]

In the Bloomberg interview Brian Pugh confirms Walgreens is getting into the fresh foods merchandising business in some form.

It's important to note though that unlike Tesco's Fresh & Easy, Walmart, Safeway and most other major food retailing chains that develop and operate their own fresh foods programs in-house, Walgreens is looking to (or already has found) find outside vendors/suppliers to actually make the fresh foods products it introduces in its drug stores. This in fact is a smart idea, since it would make little sense for the drug chain to create its own in-house fresh foods program given the high start up and operational costs associated with it. It's much better, if managed well, for the retailer to use outside suppliers to make the products.

Interestingly though - and remember we are connecting dots - in the Bloomberg interview piece Brain Pugh declines to name the new director of fresh foods Walgreens has hired to head up its fresh foods program - and no name is reported in the story.

Here's what Walgreen Co. vice president Pugh told the Bloomberg reporter as she reports in her piece today (in italics):

Walgreen hired a director of fresh foods, who will begin work in several weeks, Pugh said. He wouldn’t name the person.

Since Bloomberg's Carol Wolf helped us out a bit with this ongoing story in her piece today, it would only be fair to return the favor. So we will.

The name of the new director of fresh foods for Walgreens is Jim Jensen, who left his position as director of fresh foods at Tesco's Fresh & Easy on December 31, 2009, as we reported on January 6, 2010 in this story. Mr. Jensen is taking a little time off, packing up and moving to Illinois from Southern California, and will start work at Walgreen Co. in a week or two.

Walgreens has not confirmed publicly or officially confirmed Jim Jensen as the new head of its fresh foods merchandising efforts.

The story of Walgreen's going into the fresh foods business - although we stress we don't see it offering an as complete and extensive line of fresh, refrigerated ready-meals and other products like Tesco's Fresh & Easy and Safeway do, for example - gets all the more interesting because in California, southern Nevada and Arizona, where Fresh & Easy has its current 134 stores, a key store location strategy for Tesco has been to locate many of its Fresh & Easy Neighborhood Market stores right next to or near a Walgreens drug store unit.

Tesco and Walgreens have even partnered with shopping center developers to be the two key retail anchors - food and drug/pharmacy - in a number of new and remodeled centers.

Since Brain Pugh was in charge of retail operations at Tesco's Fresh & Easy, do you suppose he might see the irony - and potential opportunity - in the fact that so many Fresh & Easy and Walgreens units are located so close together in California, Nevada and Arizona?

Further, since fresh foods (and all consumables) falls into his responsibility list as the merchandising vice president at Walgreens, might Brain Pugh be seeking to use the close proximity of these numerous Fresh & Easy and Walgreens stores as a competitive advantage for the Drug chain in terms of fresh foods - and other consumables - merchandising and retailing?

And, in addition, might he like to use the irony of the Fresh & Easy and Walgreens units' close proximity as a retail category (fresh foods and all consumables) stiletto against Tesco, which he worked for in Asia for many years before coming to Southern California as part of the team starting up Fresh & Easy? When Brain Pugh left Fresh & Easy he left his career at Tesco plc as well, even though it began with the company long before Fresh & Easy was envisioned?

With Walgreen Co. getting into the fresh foods category - which is about 40% -to- 50% of the total offerings in a Fresh & Easy store (the other half being packaged goods and grocery products in various categories) - combined with the fact that numerous Fresh & Easy stores are located near Walgreen's stores in Tesco's three markets mentioned above - Tesco's Fresh & Easy will find itself with new and added competition right next door or across or just down the street at many of its locations.

Walgreen's already sells limited selections of packaged food and grocery items, household goods, beer, wine (and spirits in some locations) and perishables in its stores - and as we've reported and written about has been expanding its food and grocery selections in the stores for well over a year now - so that is existing competition close by for Fresh & Easy. But adding the fresh, prepared foods in whatever dimension and SKu count will add a new layer of competition to a category that Tesco believed was underdeveloped in the U.S., using that belief as one of the key reasons it invested in and developed the Fresh & Easy concept and chain.

The story is far from over - and it will get even more interesting. We will have more to come soon.

>December 25, 2009: It's 'British Invasion: The Sequel Down Under' For Former Tesco Fresh & Easy Neighborhood Market Director of Grocery Charlotte Maxwell

>May 29, 2008: Tesco Makes Official Announcement of Jeff Adams' Title and Position at Fresh & Easy Corporate; Confirms Our Report of March 5