Message From Across the Pond: Tesco is Right Square in the Middle of the 'Banish the (Plastic) Bags' Campaign in the United Kingdom 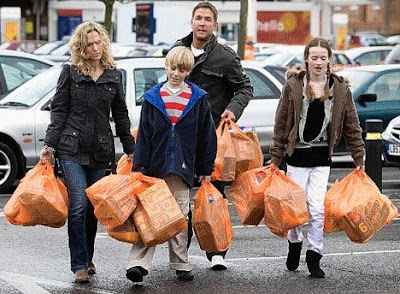 Britain's London Daily Mail newspaper launched its "Banish The Bags" campaign, designed to eliminate the offering of single-use plastic grocery or shopping bags by retailers in the United Kingdom on February 27.

In the seven days since the daily newspaper launched the campaign, the UK movement to get retailers to stop giving away and using plastic carrier bags has picked up a full head of steam.
The very day after the kick-off by the Daily Mail of its "Banish The Bags" campaign in its February 27 edition of the paper, UK grocery, hard goods and soft goods retailer Marks & Spencer announced it would begin charging customers the equivalent of about 10 cents U.S. per plastic bag in all 600 of its stores in the UK.
Marks & Spencer says it believes charging for the plastic shopping bags will result in about a 70% reduction in their use in its stores. There is precedent for this dramatic reduction in plastic carrier bag use as a result of charging shoppers a per-bag to have their goods packaged in the bags: Ireland put a tax or fee nationwide on plastic carrier bags over a year ago, and the government reports a near 90% reduction in the number of plastic shopping bags being used in the country.
The Daily Mail's campaign also is winning major support from politicians, environmental groups, some businesses and many consumers. Just yesterday, Britain's Prime Minister Gordon Brown told the nation's grocers and other retailers he would give them one-year to solve the plastic carrier bag problem in the UK on their own. If not, he said he will push-through legislation which will most likley be in the form of a complete ban on the use of the bags by all retailers. British Parliment already is debating a bill written by local officials in London to ban the plastic bags in that city.
The Daily Mail, its readers, various groups and numerous politicians are putting the pressure on the nation's grocery (and other) retailers to either adopt a per-bag fee scheme like Marks & Spencer has or to eliminate plastic grocery bags all together from their stores.
Three of the UK's "big four" supermarket chains--Sainsbury's, Asda (owned by Wal-Mart) and Morrison's--have come out and said they are considering a Marks & Spencer like fee scheme for their stores if customers want their goods packed in single-use plastic bags.
The Co-op chain, another major food retailer in the UK, stopped using single-use plastic carrier bags in its stores some time ago. And, ironically, USA-based Whole Foods Market, Inc. announced a month ago--before the campaign--that it would eliminate plastic grocery bags in all of its stores in the U.S., Canada and the UK. starting on April 22. Whole Foods' currently has just one store in the UK, in London. However, the natural foods grocer is looking to open additional stores in the nation.
The UK's leading upscale grocer, Waitrose, also has said it is considering--and will likley implement--some sort of per-bag fee for those customers who want their goods packed in a single-use plastic carrier bag.
The two Germany-based, small-format discount grocery chains in the UK, Aldi and Lidl already charge for plastic bags. In fact, doing so has been a part of the no-frills grocery chains policies for sometime. Aldi has 900 stores in the U.S., and charges a per-bag fee for plastic bags in America as well. Both grocery chains also charge for plastic grocery bags at home in Germany.
The only member of the UK's "big four" supermarket chains to came out against the idea completely, is the nation's number one retailer, Tesco plc. Tesco plc. CEO Sir Terry Leahy said the mega-chain believes customers have the right to choose what type of carrier bag they want their groceries and other goods packaged in, and said Tesco has no plans to either charge shoppers a per-bag fee, or to stop using the plastic bags in its stores.
Tesco gives shoppers points on their Tesco Clubcard, which are redeemable for discounts and other store specials, if they bring their own reusable shopping bags instead of taking a paper or plastic bag from the store. The retailer says it prefers this scheme to either charging shoppers for the bags or eliminating the use of them completely in its stores.
Tesco's position on the issue has set off a firestorm among the UK Press, consumer advocates, politicos, environmental groups and consumers. The London Daily Mail is using its pages to praise Marks & Spencer and vilify Tesco as the anti-green monopolist retailer.
In today's edition of The Evening Standard, the newspaper published full-color photos from various locations near Tesco stores in the UK, showing property litered with single-use plastic carrier bags. The paper dispatched its photographers all over the countryside to find areas near Tesco supermarkets that were strewn with plastic grocery bag debris--and find them they did indeed.[View the pictures and read the piece here.] 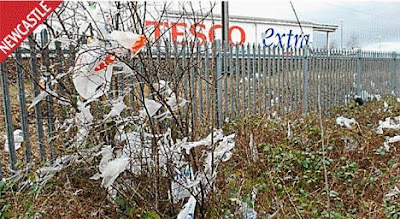 The Evening Standard also published its own research called "Tesco (plastic) Bags By The Numbers." According to the paper, Tesco gives out 3 billion single-use plastic carrier bags each year. the Evening Standard says 3 billion plastic grocery bags would stretch a distance of 750,000 miles if laid end-to-end.
Further, In the article here the newspaper offers a number of other remarkable statistics regarding the 3 billion plastic bags the UK's number one retailer, with a 34% share of the nation's retail grocery market, gives out annually. Key among those statistics is that only one in 200 of the plastic bags are recycled, which means the other 199 out of the 200 end up as litter or in landfills.
The movement to legislate, tax (or charge a fee) or outright ban the use of single-use plastic carrier bags in a worldwide one. At the end of 2007, China announced it would completely ban the use of the bags by all retail stores in the nation. A number of countries in Africa have done the same.
In the United States, the cities of San Francisco and Oakland, California have banned grocery retailers which have stores over 10,000 square feet from giving shoppers plastic grocery bags, even if the shoppers want them and are willing to pay for the bags. And, as we mentioned above, Whole Foods Market, Inc will no longer give shoppers plastic grocery bags After Earth Day, 2008, which is April 22. Further, Trader Joe's , the popular U.S. specialty grocer, uses only paper grocery bags in 90% of its stores.
Dozens of cities and states in the U.S. currently have legislation pending to legislate or ban single-use plastic carrier bags. The per-bag tax scheme doesn't have much if any currancy in the states. Rather, what we are seeing is that on the state government level, legislators are tending to pass recycling-type lws, while on the municiple or city level outright bans are the order of the day.
In France, the nations two largest supermarket chains, Carrefour and Auchan, have voluntarily stopped using single-use plastic carrier bags in their stores throughout the country. And, of course, Ireland's successful nationwide tax on plastic carrier bags has made them go from the majority-used grocery bag, to the minority one, with a near 90% reduction in the number of bags circulating in the country.
Tesco looks to not only be fighting a lone battle in the UK, as the nationwide frenzy to ban single-use carrier bags heats up in large part because of the daily media attention devoted to the isssue by the Daily Mail's "Banish The Bags" campaign, but also do to the simple fact that its an international issue.
Tesco's USA Fresh & Easy Neighborhood Market offers customers their choice of paper or plastic grocery bags, as do most grocery retailer's in the country. The stores also sell reusable shopping bags. However, as mentioned earlier, Trader Joe's offers only paper bags (and sells reusable bags) in nearly all of its U.S. stores. And Whole Foods Market, Inc., which is a major trendsetter in U.S. food retailing, will no offer the plastic bags after April 22. Numerous other retailers are considering eliminating single-use plastic bags in their stores as well.
Least Tesco thinks it isn't going to face the very same issue it is facing in the UK in the U.S. with Fresh & Easy, the retailer is dead wrong. The issue is heating up across the pond in America.
Last year, the California State Legislature passed a bill that requires all large supermarkets to place plastic carrier bag recycling bins in their stores, and to offer reusable shopping bags for sale in every store. The California Grocers' Association, the industry's state trade group, helped write the legislation, as the group saw outright bans like San Francisco's and Oakland's coming and hopes to head them off in other California cities with this new law.
Cities in the U.S. are allowed to pass their own laws (home rule) even if a state law like the one involving the plastic bags exists. There are at least 40 cities in California right now debating plastic grocery bag bans for their cities.
New York and New Jersey passed a recycling law like California's this year as well. However, the movement in the U.S. is toward outright bans, led by local governments. Cties across the country--big and small, urban and rural--are considering plastic carrier bag bans.
Meanwhile, back home in the UK, Tesco, parent company of Fresh & Easy Neighborhood Market, finds itself isolated--perhaps happily--as the only one of the "big four" that has publicly proclaimed it has no plans to either levy a per-bag fee on plastic carrier bags or stop offering them completely in its stores.
We bet Tesco changes its mind on the issue very soon.
Additional Resources:
>Read the London Daily Mail's "Banish The Bag" kickoff story here.
>You can read additional articles about the UK "Banish The (plastic) Bag" campaign here
Posted by Fresh & Easy Buzz at 7:41 PM