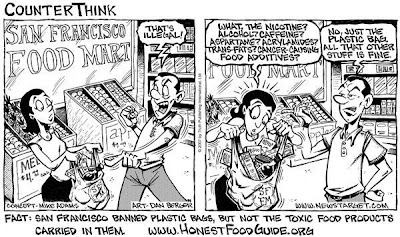 Im a Trader Joe's crew member, and I noticed that you said we do not offer plastic to our customers. In actuality, we do offer plastic BUT, if a customer wants plastic they must ask for it. We bag everything in paper by default. Rarely to people ask for plastic at my store.

Thanks for letting us know "your" Trader Joe's does offer plastic grocery bags on request.

The Trader Joe's in our region just offers paper.

However, we also recieved an email on the piece from a reader in another part of the U.S., who said their TJ's stores also offer plastic--but it has to be requested by a shopper... That paper is the default bag of use, if you will.

It seem it's a bit of a patchwork in terms of some offering plastic on request, others not.

We have removed the sentence in our piece though because we don't want to give the impression that it's a chainwide policy, based on your report and the other readers.

I had to comment about the plastic bag fee issue in SF. I lived in Taipei for a number of years and right after they left, they banned free plastic bags in grocery stores. Retailers now charge between 5-10 cents for a "single use" plastic bag.

There are exceptions to this rule (small open-air markets), but for the most part this legislation has worked very well. It's a small hassle, but now people remember to bring their reusable bags with them when they go shopping!

Thanks Fred.
Do you (and others) think it's a better idea to charge a per bag fee for the bags like in Taipei and Ireland (and like in the poposed California legistation)...or to ban the single-use plastic bags outright like San Francisco did?