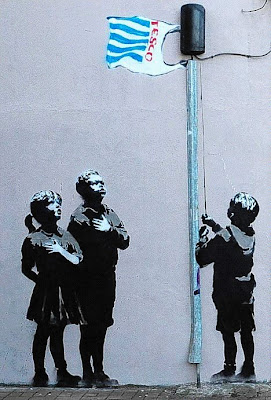 Yesterday, we wrote here about how the London Daily Mail newspaper's campaign to "Banish The (Plastic) Bag," started on February 27, is sweeping across the United Kingdom. In just the one-week since the campaign to banish single-use plastic carrier bags was started by the Daily Mail, British politicians, environmental groups, citizens and retailers have jumped on the anti-plastic shopping bag bandwagon.
Popular UK grocery and hard-soft goods retailer Marks & Spencer was the first merchant to announce it would begin charging shoppers the equivalent of about 10 cents per-bag U.S. if they wanted their purchases packed in a single-use plastic carrier bag.
Today, the British department store chain Debenhams said it is working on a scheme to charge for single-use plastic shopping bags, along with offering reusable tote bags in all of its 140 stores, beginning with a trial soon in some of its shops.
Another development occurred today in the UK's Channel Islands, where supermarkets including Safeway, Marks & Spencer, and Checkers will soon begin charging customers about 5 cents U.S. per plastic carrier bag. Tesco doesn't have a store on the Islands.
Speaking of Tesco, as we wrote yesterday, the UK's biggest retailer is square in the line of fire in the "Banish The Bag" campaign, as it announced last week it has no plans to either charge shoppers for the single-use plastic carrier bags or eliminate their use in its stores.
Tesco gives shoppers who bring their own reusable shopping bags to its stores points on their Tesco Club Cards, which are good for discounts and other store specials. The retailer said it believes this is an option which encourages consumers to bring their own bags, and reduces plastic bag use, while still preserving shopper choice.
The Daily Mirror, environmental groups, some politicos and numerous citizens have been heavily critical of Tesco for not doing more as the largest retail user of the single-use plastic carrier bags in the nation. Tesco is the UK retail grocery market share leader, with 34% of total retail sales.
The Tesco Plastic Bag Flag

Now, a street artist has done his or her part to back the "Banish The Bag" campaign, while hoisting Tesco plc. on its own plastic bag petard it appears. A few days ago, a large painting appeared on the side of a chemist shop in Islington, in north London. The painting shows two children, with their hands on their hearts, pledging allegiance as a third child hoists a waving Tesco plastic bag up the flag pole. [See the picture of the art work at the top of this story.]
The painting is unsigned. However, the word on the north London street is that it's the work of the famed London street artist Banksy, who has sold similar pieces of his work for hundreds of thousands of dollars.
Tesco says its position on banishing plastic bags remains the same today as it did yesterday, according to a company spokesman: the retailer says it has no plans to either charge shoppers a per-bag fee or to eliminate single-use plastic carrier bags in its stores.
In our piece yesterday, we said we think Tesco will change, and modify, its position on the issue sooner rather than later. If life imitates art, we think that modification will come fairly soon. Further, we hear from our grocery industry correspondents in London, that Waitrose and Sainsbury's, may be making announcements, which could include a per-plastic bag fee similar to the one announced by Marks & Spencer last week.
Here's a rundown on where the major UK grocery chains stand vis-a-vis single-use plastic carrier bags. The retailers are listed in order of their market share position.


All seven of the grocery chains above sell a variety of reusable shopping bags in their stores, ranging for inexpensive carrier bags made out of a synthetic material, to low price -to- higher-priced cotton canvas shopping totes. All of these above retailers who offer plastic bags in their stores also offer some sort of Club Card bonus point system or a "cents off" per bag discount for each reusable shopping tote bag shoppers' use in lieu of accepting a plastic bag for their groceries.

Retailers throughout the world need to create a policy

Tesco is far from the only major international retailer that is going to see itself in the middle of the plastic carrier bag issue; it's just the major target right now in the UK because of the position it took on the issue, and because the issue is front and center in the nation.

U.S-based Wal-Mart, the world's number one retailer, and France's Carrefour, the second-biggest global retailer, shouldn't take glee in Tesco's situation at home. The non-democratic government of China's decision to completely ban the use of thin plastic bags at retail stores in the nation is going to spur other countries throughout the world to follow suit, although many of them already were even before enacted it's new law.

What big, international retailers like Wal-Mart, Carrefour, Tesco and others are already beginning to find, but will soon start finding regularly, is that there will be a patchwork quilt of laws and ordinances throughout the world regarding if and how the retailer's can offer plastic shopping bags in their stores.

In some places, like China, parts of Africa, parts of Canada and Australia, the bags are already banned. In other places, like Ireland and possibly India, the single-use carrier bags will be taxed. And, in the United States, the retailers' will be required to place recycling bins in stores in some states--like California, New York and New Jersey--but will also find city-by-city bans, such as those already in place in San Francisco. There are at least 40 cities in the U.S. currently debating plastic grocery bag bans for their communities.

We think international retailers like Tesco, Wal-Mart and Carrefour--and others like the "big three" supermarket chains in the U.S.--Kroger Co., SuperValu, Inc. and Safeway Stores, Inc.--would be smart to get their ducks in a row and create and announce their own single-use plastic carrier bag policies--be they a per-bag fee, elimination of the bags' in their stores, or some other scheme. If not, the state and local legislators will define that policy for them by creating a law--which is happening with increasing frequency.

We predict when Whole Foods Market, Inc, eliminates the use of the plastic carrier bags in all its U.S. stores next month on Earth Day, April 22, the "Banish the Bag" campaign will begin across the pond here in the U.S.

We aren't saying a major U.S. daily will launch a campaign similar to what the Daily Mail has done in the UK--although they might think about doing so as most U.S. newspapers need as many readers as they can find--rather, we believe the Whole Foods Market self-ban will serve as a symbolic and real signal in the U.S., which will elevate the issue even higher than it currently is.