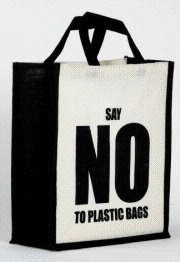 As part of our ongoing coverage of the United Kingdom's "Banish The (Plastic) Bag" campaign, which was launched by the London Daily Mail newspaper on February 27, we're keeping our readers updated on what moves, if any, that nation's top grocery retailers make in response to the campaign, the goal of which is to get retailers to dramatically decrease (or eliminate completely) the amount of free single-use plastic carrier or grocery bags they use to package customer purchases.

The anti-plastic bag movement is gaining ground in the U.S., although the nation's grocery retailers aren't at the center of it like in the UK--yet. Rather, in the U.S., the "ban the plastic bag" movement's focus is on legislation at the state and municipal levels.
For example, the states of California, New York and New Jersey have passed laws that require supermarkets to place plastic grocery bag recycling bins in all of their stores over a certain size. The food retailers also must make sure the bags are picked up weekly by a recycling service--and pay the costs. The legislation in these three states also requires the grocery retailers to sell reusable bags in their stores, something most of them were already doing.
The bigger action in terms of plastic bag bans in the U.S. though is at the city or municipality level. San Francisco was the first U.S. city to ban the use of plastic bags completely in 2007 in supermarkets in the city over 10,000 square feet in size. The law has been in affect in San Francisco since late last year. Nearby Oakland has passed a similar law. However, the plastic bag industry has challenged the legislation in court. As a result, the law's implementation has been set aside until there is a court decision on the lawsuit.
There currently are about 40 -to- 50 U.S. cities--ranging from tiny Willits in the far north of California, to Chicago in the Midwest and Santa Monica in Southern California, to Maryland in the east--that are considering legislation at one stage or the other that would ban the use of plastic carrier bags in supermarkets.
Additionally, Whole Foods Market, Inc. is the first major food and grocery retailer in the U.S. to announce it will eliminate the use of free plastic carrier bags in all of its 270 stores in the U.S., Canada and the UK (just one store in London thus far). The self-imposed plastic bag ban will become affective on Earth Day 2008, which is only a little over a month away on April 22. A number of other natural foods retailers, and perhaps a few upscale supermarket chains, are expected to follow Whole Foods' lead in self-banning plastic grocery bags in their stores.
Back in the United Kingdom
As we reported in our initial piece on the UK "banish The Bags" campaign last week, Tesco plc., parent company of Fresh & Easy Neighborhood Market USA, announced shortly after the Daily Mail launched the campaign--which has grown to include tens of thousands of consumers, politicians, city officials and others in the UK--that it would not either charge a per-bag fee or eliminate the plastic carrier bags from its stores.
Popular UK grocery and soft/hard goods retailer Marks & Spencer (M&S) was the first major retailer in the nation to get on board the "Banish The Bags" campaign. Just a couple days after the campaign began, M&S announced the retailer would begin a test in which it will charge the equivalent of about 10-cents U.S. per plastic carrier bag if a shopper chooses to have his or her purchases packaged in one, rather than in a free paper bag or a reusable shopping tote brought from home or purchased at M&S.
Other retailers followed. They include: department store chain Debenhams (320 stores in the UK), which will begin a trail program in which it will charge 10-cents U.S. per-bag; popular general merchandise retailer Woolworths (820 UK stores), which says it will institute a per-plastic carrier bag charge in some of its stores to start, then likely roll the scheme out to all its stores soon after; B&Q, a general merchandise retailer which has already started its per-bag charge trial and says thus far it's seeing about an 88% decrease in the number of plastic carrier bags the retailer is using in its stores; charity shop retailer Oxfam, which says it will soon eliminate plastic bags completely; and non-profit specialty retailer Help the Aged, which also says it is eliminating the use of plastic bags in its UK stores.
In terms of the UK's major grocery chains, Mark's & Spencer is thus far the only one to have instituted a per-plastic carrier bag charge trial, with the goal of instituting the scheme in all its stores if there isn't extensive consumer complaints.
However, a number of UK supermarket chains have followed M&S's lead, and have made some changes via announcements in just the less than three weeks since the "Banish The Bags" campaign was launched.
Below are the UK's top supermarket chains (in order of market share), and what if any announcements they've made since the February 27 kick-off of the anti-free plastic carrier bag campaign:
Tesco: Shortly after the campaign launch, a Tesco spokesperson said the company's, and CEO Sir Terry Leahy's, policy if that the nation's number one chain with about a 33% market share, has no plans to either charge a per-bag plastic carrier bag fee or to eliminate the use of the bags in its stores. Tesco says it's a matter of consumer choice if a shopper wants their groceries packed in a single-use plastic grocery bag.

It's a shame that the Aussie's don't seem to be taking the same action, despite threats of a complete ban...