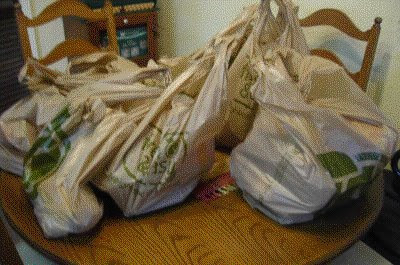 The Palo Alto, California City Council passed legislation this week that will require supermarkets in the San Francisco Bay Area city in Northern California to stop providing customers with single-use plastic carrier bags in their stores.

The council voted 7-1 in favor of the plastic bag ban at supermarkets.

The new law gives supermarkets in the city, which is home to Stanford University and is a major part of high-tech Silicon Valley, six months to phase out the use of the plastic carrier bags in the stores. Beginning on September 18 of this year the grocery markets will no longer be able to offer the plastic bags.

The city of Palo Alto has been grappling over passing some sort of single-use plastic bag law for over a year. About a year ago we talked to Phil Bobel, manager of the city's environmental compliance division. Palo Alto was then going forward with a per-bag fee law, in which shoppers would pay 15-25-cents for each plastic bag they requested in the stores, rather than an outright bag ban.

Last year, Boble met with representatives of Safeway Stores, Inc., Andronico's Markets (a local chain), Mollie Stones (another local chain) and other grocers with stores in Palo Alto. The city agreed not to enact the per-bag consumer cha legislation until it had further dialogue with the grocery retailing companies.

However, between then and now, the Palo Alto City Council decided it would go with an outright ban on the distribution of the single-use plastic carrier bags at the city's supermarkets.

That means Safeway, Andronico's, Mollie Stone and JJ& F will be the only four supermarkets required to eliminate the plastic bags on September 18th.

Of course any new grocery stores that open in Palo Alto will not be able to offer the single-use plastic carrier bags either.

On grocer that plans on opening a grocery and fresh foods market in Palo Alto is Tesco's Fresh & Easy Neighborhood Market.

We reported in this October 15, 2008 story [Tesco to Locate Fresh & Easy Store in Palo Alto, California; it's First in the City and SF Bay Area Store Number 22 By Our Reporting] that Tesco had secured a site in Palo Alto for one of its Fresh & Easy markets, as part of its push into Northern California. Tesco's Fresh & Easy hasn't confirmed the Palo Alto site. But we have in our reporting.

In the October 15 piece, we discussed the plastic bag-fee/ban issue in Palo Alto.

The stores also sell a reusable "Bag for Life." The clear carrier bag, made out of a synthetic material, costs 20-cents each. Fresh & Easy says it will replace the bag for a customer's life, hence the name. The stores also sell an assortment of reusable canvas shopping bags, including one that retails for just 99-cents.

But the majority of Fresh & Easy shoppers get their groceries packed in the free single-use plastic bags. And because the stores don't offer the paper bag option as 99% of its competitors do, that means more plastic bags get used at a Fresh & Easy store on a relative basis than they do at stores that offer both free paper and plastic.

Fresh & Easy has postponed its launch into Northern California until an undetermined or at least unannounced date, despite the fact it's paying monthly leases on about 50 store sites, based on our reporting.

In addition to Palo Alto, which beginning September 18 will ban plastic bags at supermarkets, the city of San Francisco has a plastic bag ban law that's now been on the books going on two years. Tesco thus far plans to open two Fresh & Easy stores in San Francisco. The grocer will either have to offer paper grocery bags in those two stores and in the one in Palo Alto, or force shoppers to have there purchases packed only in bags they pay for, like the "Bags for Life."

Other cities in Northern California where Tesco has Fresh & Easy sites are also in the process of debating and proposing plastic bag ban laws. Others are working on bag-fee legislation.

A few cities in Arizona where Tesco has Fresh & Easy stores also are in the process of discussing plastic bag bans or per-bag fee legislation.

We've suggested since at least one year ago that Fresh & Easy offer paper grocery bags as well as the single-use plastic carrier bags in its stores. [A recent, related piece: March 7, 2009: Analysis & Commentary: The Seven Retail Operations Changes Tesco's Fresh & Easy Neighborhood Market Needs to Make to Help it Get On the Success Track.]

Our argument isn't only an environmental one. Rather it's more of a choice argument, along with the fact that by not offering the paper option the grocery chain intentionally limits its customer base, as there are shoppers who just absolutely hate the plastic bags, which is why 99% of the supermarket chains in the Western U.S. offer the paper or plastic option.

What Tesco might not know because it's a British grocer, although that's what research is for, is that paper grocery bags were the only bag used in U.S. supermarkets for decades. Even after the single-use plastic carrier bag was introduced in supermarkets in the 1970's, many chains and independents waited years after before they started offering them. In fact, were it not for strong marketing by the plastic carrier bag industry, which included offering the bags for rock bottom prices to grocers, the plastic bags might never have even gotten widespread distribution in American supermarkets, discount and drug stores.

Because of the history of the paper grocery bag in U.S. food retailing, nearly every major supermarket chain and independent kept the paper bags after bringing in the plastic bags, offering the paper option, even though the plastic bags cost much less for the retailers to buy from suppliers.

History and tradition are tough things to buck by a start up grocery chain.

American consumers also love choice, right down to what type of bag their groceries are packed in at the grocery store.

As we offered in analysis first about a year ago, and in a number of other posts since then, Tesco would be wise to just bring paper grocery bags into the Fresh & Easy stores, offering them as an option with the single-use plastic. If not, legislation is and will do it for the grocer anyway, on a piecemeal basis.

We believe in being proactive rather than reactive. Waiting for laws to tell a retailer it has to offer an option like paper bags, which 99% of its competitors already do anyway, is reactive. Bringing in the paper option, and then touting it as an example of expanding shopper choice (and the environmental benefits since there's a comprehensive recycling system in the U.S. for the paper bags but not for the plastic) at Fresh & Easy is proactive.

Basically ever city in town in California, and most elsewhere in the U.S., either has a curbside recycling program which includes paper grocery bags or allows residents to thrown the paper grocery sacks in their green waste trash bins. The garbage companies contracted by the cities then turn the paper and green waste into composed which is generally sold to lanscaping companies and given away to city residents for garden use.

No curbside recycling programs, with perhaps a couple rare exceptions, exist in California and U.S. cities. The bags aren't compostable either. They have to be returned to the supermarket or another recycling facility in order to get recycled. Unfortunately most consumers don't do this. Instead they toss the plastic bags in the garbage. The result being the bags end up in landfills. And it's single-use plastic bags you see littering the streets and beaches rather than paper grocery bags. It's plastic bags not paper bags that also are a major part of the floating plastics garbage clog in the Pacific Ocean ranging from the west coast in the U.S. to Japan.

We shall see which road Tesco's Fresh & Easy takes in terms of offering the paper bag option in its stores. We believe the CEO could order the change tomorrow. But we could be wrong since if the decision were that simple Tesco Fresh & Easy Neighborhood Market CEO Tim Mason, who also is a corporate officer of Tesco plc, would have likely saw the need to offer the paper bag option ages ago and ordered the change made post haste.
Posted by Fresh & Easy Buzz at 3:24 PM