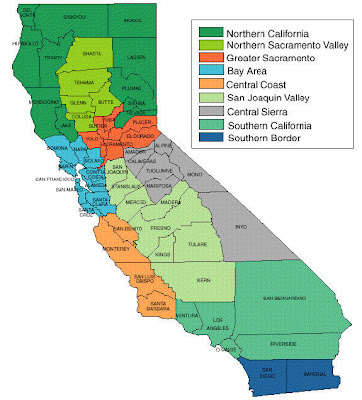 Bakersfield, California, best known as once being one of the top oil-producing regions in the United States, along with being the boyhood home of famous country western singers Buck Owens and Merle Haggard, will be the next new region in California that Tesco's Fresh & Easy Neighborhood Market marches into, when it opens at least six of its small-format, convenience-oriented grocery stores in the region either at the end of this year or in early 2009.
Tesco, the world's third-largest retailer, plans to open three Fresh & Easy grocery markets in Bakersfield--two in the northwest portion of the city and one in the southwest side of town. The retailer also plans two open two stores in the nearby Bakersfield suburbs of Delano and Wasco. Bakersfield, Delano and Wasco are located in Kern County. [Kern County is shaded in light green in the map above. See San Joaquin Valley on the map key.]
These six stores are only the initially units Tesco has planned for the region. Our commercial real estate sources, along with a source in the local community, tell us the grocer is looking for additional sites in the area for its grocery stores, which merchandise a limited-assortment of Fresh & Easy store brand and national brand everyday groceries, along with specialty and natural foods, fresh produce and meats, an extensive selection of prepared foods, wines and craft beers, fresh flowers, and some non-foods' products.
Fresh & Easy grocery stores average 10,000 -to- 13,000 square feet. There currently are 59 of the stores in Southern California, Arizona and the Metro Las Vegas, Nevada region. The retailer plans to open many more stores in these three states, especially in California and Arizona. Based on statements from Tesco, we believe the retailer wants to have as many as 200 stores opened by mid 2009.
Additionally, Tesco has signed leases for an initial 18 Fresh & Easy stores in Northern California's San Francisco Bay Area and is negotiating for more store sites in that region. Further, the grocer has inked leases on 19 sites for its small-format grocery markets in the Sacramento region in Northern California. Tesco also is negotiating leases for additional grocery store sites in the Sacramento area, as well as in the Northern San Joaquin Valley cities of Stockton, Tracy, Manteca and Modesto.
Fresno, which is between Bakersfield and the Stockton/Modesto region, also is on the retailer's radar screen for Fresh & Easy store locations. As we reported here yesterday, Tesco will likely sign a lease for a Northern California distribution center on land in Stockton, California, which is about a 30 minute drive from Sacramento and an hour from San Francisco.
Tesco's initial Bakersfield region Fresh & Easy grocery markets will be at the following locations:

The first of the initial six Bakersfield region Fresh & Easy grocery stores could open as early as the end of this year. However, it's more likely the stores will start opening in early 2009.
Most of these six stores will go into empty, existing commercial retail buildings in the region. This is a practice Tesco is employing for its Fresh & Easy stores. The retailer will locate a vacant (usually former supermarket or similar retail store) retail building, obtain a lease for it with generally favorable terms, and remodel the building to fit its 10,000 square foot -to- 13,000 square foot Fresh & Easy Neighborhood Market format. [Read a piece we did on this issue here.]
Not only does the grocer have a lower start-up cost by following this practice, versus building stores from the ground-up (although it is doing some of that), it also is able to go from lease to getting the store open and operating much faster, since the building shell and all its infrastructure is already in place, and Tesco has only to gut the interior, create a Fresh & Easy grocery store inside, and give the exterior a moderate remodel in order to create its Fresh & Easy store and retail brand.

Bakersfield is located in Kern County in the heart of California's Central Valley. It's about 110 miles from Los Angeles to the south and around 110 miles from Fresno to the north. The city's population is about 324,000, making it California's 11th most populous city. The Bakersfield Metropolitan region--which includes Delano and Wasco--has a population of about 780,000, which makes it the 65th largest metropolitan region in the United States.