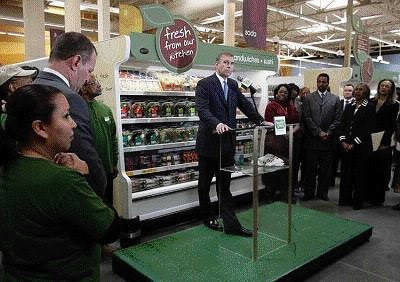 Britain's Prince Andrew, Duke of York, was the special guest at the grand opening ceremony of the new Tesco Fresh & Easy grocery market in Compton, California on Friday Morning. The Southern California press gave Prince Andrew his very own California nickname, "The Fresh Prince of Compton," at the event.
Tesco's Fresh & Easy Neighborhood Market made a commitment prior to opening its first store in November, 2007 that as part of its USA retailing strategy it would open a number of its small-format, convenience-oriented neighborhood grocery stores in cities and neighborhoods which it refers to as "food deserts", areas that are underserved by grocery stores, especially those that offer high-quality fresh foods and groceries. Most of these "food deserts" are in inner city neighborhoods.
On Friday, February 8, the British retailer made good in part on that promise by opening its 43rd and newest grocery market in the low-income Southern California city of Compton. Compton is a majority African American city which is best-known for being the home to the infamous street gangs, the Crips and the Bloods. It's also a city that nearly every grocery chain has avoided--until now.
Before the 10,000 -to- 13,000 square foot Fresh & Easy store opened on Friday morning, Compton had a grand total of one full-service Supermarket for a city of about 100,000. Fresh & Easy makes two.
Compton, lead by its mayor and a group of community residents, is on the rebound though--or at least is dedicated to getting there. City officials and community groups are promising to remake the city block-by-block, new job-by-new job, and retail store-by-retail store. The new Fresh & Easy market is a big part of those plans.
The food and grocery industry blog Natural~Specialty Foods Memo has a good piece on the Compton Fresh & Easy grand opening, including a special guest Tesco executives brought along to help celebrate the new store's opening day.
Natural~Specialty Foods Memo also has a story in the piece about a new Fresh & Easy market that will be going into another "food desert" neighborhood. This neighborhood, Oak Park, is in Sacramento, California. Fresh & Easy also will play a major role in the continued renovation of the Oak park neighborhood in Midtown Sacramento.
Lastly, the blog reports on a story it was one of the first publications to write about back in November, 2007. That story is the possible expansion by Fresh & Easy Neighborhood Market from its current Western U.S. beach head (California, Arizona and Nevada) to the Chicago, Illinios region.
Read the piece in Natural~Specialty Foods Memo here.
Posted by Fresh & Easy Buzz at 8:29 PM