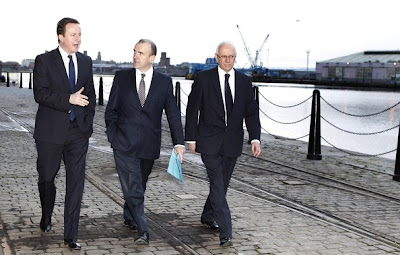 Pictured above: Retiring Tesco CEO Terry Leahy (middle) listens to British Prime Minister David Cameron (left) as the two men, along with Peter Nears of Peel Holdings (right) tour the £4.5 billion Wirral Waters development on January 6, 2011 in Wirral, England. Wirral Waters, which is designed to develop and use the mostly unused dock space on the site, is the biggest regeneration development of its type in Britain. Click here to learn more about the project. Sir Terry Leahy is a member of the City Region Local Enterprise Partnership, which is involved in the Wirral Waters regeneration development. Cameron met with the board on January 6. [Photo credit: WPA Pool/Getty Images Europe.]

The Changing of the Guard at Tesco
News/Analysis/Commentary

Outgoing Tesco CEO and director Sir Terry Leahy will have a little walking around money to spend when he retires from the United Kingdom-based global retailer in March. Tesco, the third-largest retail company in the world, owns El Segundo California-based Fresh & Easy Neighborhood Market in the U.S., along with having stores in the UK, Europe and Asia.

On Wednesday (February 23, 2011), Leahy, 55, who's been CEO for 14-years and joined Tesco over three decades ago as a teenager, exercised stock options on 2.996.032 million shares of Tesco plc stock at various option prices, and sold the shares, resulting in a tidy profit for the man who's so closely associated with the UK-based retailer that he's often referred to in Britain as "Tesco Terry," according to a regulatory filing issued yesterday by the company. The options were acquired by Sir Terry under the company's Executive Share Option Scheme. [The regulatory filing is here.]

Based on our calculations, the exercising of the options and sales of the shares on Wednesday by Leahy, at the prices noted in the regulatory filing linked above, resulted in a pre-tax payday for the retiring CEO we estimate to be around £5,174,751.1 (pounds), or $8. 357. 223 million (U.S.).

Our estimate is based on the data provided in Tesco's regulatory filing news release issued yesterday. We arrived at the estimated figures by multiplying the number of shares by the difference in the selling price and the option price. We emphasis that ours is just that - an estimate.

When he retires as CEO next week, Sir Terry will be severing all his formal ties with Tesco. He isn't staying on as a non-executive member of Tesco's board, for example, nor is he remaining at Tesco in any advisory capacity.

Philip Clarke, who is Tesco's CEO-designate and its director of Europe and Asia operations and corporate information technology will assume the CEO position from Leahy as part of a formal succession process that's been going on at the company since June 2010.

When he and Tesco announced his March 2011 retirement plans last summer, on June 8, 2010, Leahy mentioned that one of his post-retirement plans was to become a private investor. Perhaps the exercising of the options on Wednesday and the sale of the resulting shares will comprise the first official fund Sir Terry creates and puts to work when he officially becomes "investor Leahy," when he retires next week? Leahy holds additional Tesco stock, which he's accumulated over many years.

Outgoing Tesco CEO has also been asked by British Prime Minister David Cameron to work on a number of economic and environmental issues in an advisory capacity for his administration, something Sir Terry has already started doing a bit of. Leahy supported and campaigned for Cameron over Gordon Brown in the 2010 election.

We suspect Leahy to get more involved in public service post-retirement, including further advising and helping the current British PM. But we doubt Leahy has any desire to be appointed to an official government position in the Cameron government, although we could be wrong.

After all, Sir Terry is only 55-years old. He's spent 14-years heading Britain's most well-known company - Tesco - which not only is the number one retailer of food, groceries and general merchandise in the UK, it also has a banking and finance division (Tesco Personal Finance and Tesco Bank), sells insurance, is a major mobile phone carrier and more. And as a result of being "Tesco Terry" all these years, he has among the highest recognition levels of any single person in the nation.

On top of that, he's become known in the UK and globally as a leader in the climate change reduction movement, along with being seriously involved in other environmental conservation issues.

If you add up all the factors noted above - the right age (55), high recognition level among the public, solid business and executive experience at home and globally, knowledge of economic and environmental issues, a proven jobs creator, generally well-liked as Tesco's CEO - some might suggest they're not bad credentials for getting into politics - perhaps getting elected as an MP, then using that position to become Prime Minister.

We don't think that's the post-retirement career path outgoing Tesco CEO Terry Leahy has in mind - but perhaps he should look into it.

After all - he doesn't need the money post-Tesco. And the UK government could sure use a political leader or two who actually has created a job or two. Or in the case of soon-to-no-longer be "Tesco Terry" but rather just plain old Sir Terry - one who's created tens of thousands of jobs at home during the 14-years he's been the CEO of Tesco, which today is the largest private sector employer in the UK.
Posted by Fresh & Easy Buzz at 12:57 PM